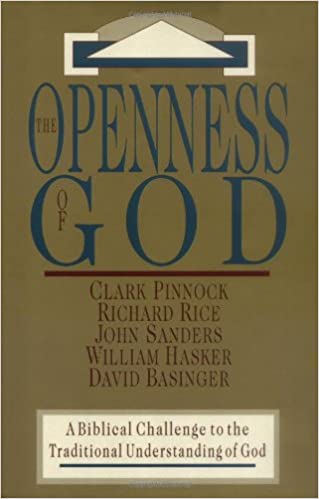 * After all these years, John Sanders on BEL: About twenty years ago and with about 500 other (mostly) gentlemen, Bob Enyart attended a meeting at the Broadmoor in Colorado Springs of the Evangelical Theological Society. The place was abuzz and the discussion was about ETS member John Sanders and some of his associates. From the Scriptures Dr. Sanders defended open theism. Today, he joins Bob today to discuss his Historical Considerations chapter in the modern classic, The Openness of God, written with Clark Pinnock, Richard Rice, William Hasker, and David Basinger. At drjohnsanders.com you can follow his work and you'll likely love John's books including:
- Theology in the Flesh: How Embodiment and Culture Shape the Way We Think about Truth, Morality, and God
- No Other Name: An Investigation into the Destiny of the Unevangelized [compare to our BEL Romans study]
- The God Who Risks: A Theology of Divine Providence

* The Reply Bob Never Gave to Dr. Sanders: A quarter century ago after their meeting in Chicago, John emailed asking Bob about his position on Genesis 18 regarding God the Son saying, "I will go down now and see whether they have done altogether according to the outcry against it that has come to Me; and if not, I will know." Bob introduces tomorrow's program explaining why he never replied to John and has a brief write-up there at kgov.com/genesis-18-God-goes-down-to-see.

* Related:
- In Regensburg, Germany in Pope Benedict's Greek synthesis talk he stated, "It is often said nowadays that the synthesis with Hellenism achieved in the early Church was a preliminary inculturation which ought not to be binding on other cultures [which] have the right to return to the simple message of the New Testament prior to that inculturation... This thesis is not only false; it is coarse..."
- Appendix 5 of Bob's Battle Royale X debate on open theism vs. D. James Kennedy's professor of New Testament, Dr. Samuel Lamerson, addresses Benedict's comments.
- With Dr. Sanders agreeing that C.S. Lewis presented an inconsistent view on the classical quantitative attributes, Enyart quotes this leading Christian author, "We correctly deny that God has passions …He cannot be affected by love..." -C.S. Lewis, Miracles, (London: HarperCollins Publishers, 1960-1974), pp. 92- 93, and Bob adds, "Lewis wrote that on a bad day when the quantitative attirbutes happened to tighten their grip on him."

Join us tomorrow for part two of our interview with John Sanders.