The Lessons from Job 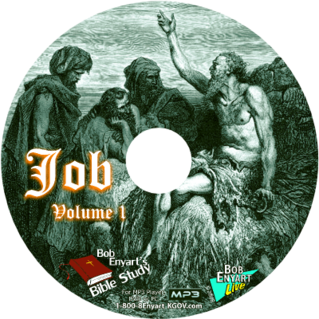 * Job Overview: Bob begins his Bible study of The Book of Job by presenting an overview of the bookz

Today's Resource: In Bob Enyart's Book of Job verse-by-verse Bible Study we learn how Job was tested by God and, crucially, the difference between why these terrible things happened to him, and why bad things happen to us! If you'd like to purchase the complete two-volume study together, just send a request to Bob@kgov.com and we'll add that option to our store!

Hey Poly! Thanks for asking this question. And Bradley asked what is the lesson learned in Job. There were a few of course. Some of the primary lessons appear to be:
- After the great wealth of Abraham, Isaac, Jacob, & Job, God realized the many might believe the lie that only those made wealthy would worship Him
- Satan believed his own lie that men would only worship God if they were given much wealth
- God accepted Satan's challenge in order to dispel the claim that men would only worship Him if they were made wealthy
- What happened to Job was extraordinary and therefore made it into the Scriptures
- When a believer contracts coronavirus or any disease, it is invalid hermeneutics to extrapolate from Job that this was arranged in heaven
- In the beginning of his suffering Job's initial response was godly and admirable
- Much of what Job's "counsellors" claimed as insights into his dilemma is provably false because their ideas contradicted the "given" information of the first chapters
- The book of Job is a warning about the effects of bad counsel
- After weeks of listening to ungodly advisors Job's godly initial response began to falter, and he began to want to make a case against God
- Finally God appears to Job (as He will appear to all men eventually) and gives him the opportunity to make his case
- Instead of boldly prosecuting his own case, like Job wanted to do, when He had the opportunity, to paraphrase, he said, "Oh God I'm so sorry please forgive me."
- Men are wise to trust God.
- God is good.

To Poly's question, if Satan were the only one in Scripture who acted as though that the future was not settled, then appealing to that fact would seem unwise. (Of course even the demons believe that there is one God and there's nothing wrong with pointing that out (James 2:19), including to make the point that mere mental assent alone is insufficient to enter into a love relationship.) But in Scripture, many passages indicate that: