Information Theory & the Demise of Darwinism

Real Science Radio co-host Fred Williams has just given his information theory presentation to four creation groups in Colorado and now brings it to our podcast and broadcast airwaves on America's most-powerful Christian radio station, the 50,000-watt AM 670 KLTT. What did one of the most accomplished physicists in history mean when he said, "Everything is information?" What is information? Why do so many materialists desperately claim that information is physical? Bob Enyart and Fred explore these questions and more.

* SETI SAYS: Fred often points out the ubiquitous hypocrisy in the materialist claim that there is no scientific way to search for evidence of intelligent design. The darling of atheists, SETI, the Search for Extraterrestrial Intellgence, has wasted billions of dollars through decades of distraction from hard science and has a likely opportunity cost far beyond that cash outlay. Yet SETI's website states the obvious. RSR Question: What are one of the ways that you could tell that you’ve detected intelligence? SETI's Answer: "The existence of coded information on the signal." Just. Like. DNA. 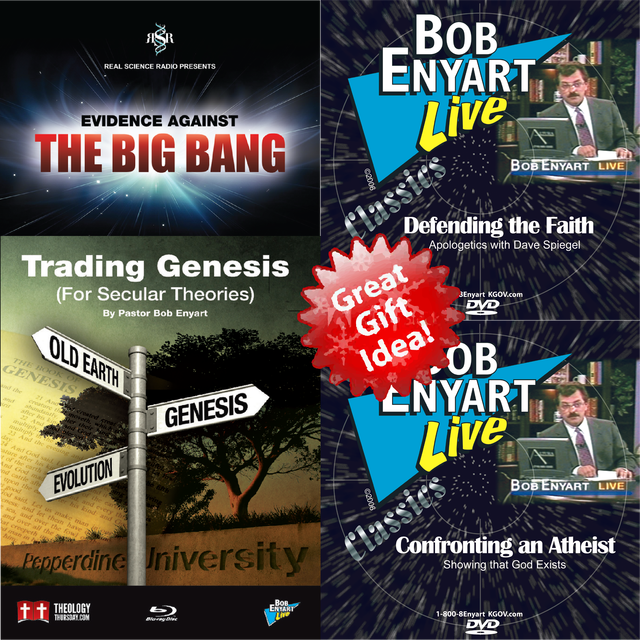 At its core, evangelism is sharing the good news of salvation, forgiveness, and grace. Without these, the world would be completely lost, we'd have a world full of despair and sin, and we would have to face the consequence of that sin- death. But thankfully Jesus came and died on the cross to save us from our sin. Then as Christians, we're called to go into the world and spread the news that He has saved us. Only... the world isn't exactly eager to believe. Sharing the Gospel has proved difficult for many Christians. Luckily, Bob Enyart Live has been putting out resources for years showing Christians how to defend their faith in the Bible. This package is a great resource if you're looking to train yourself in evangelism.

Confronting an Atheist: From the creation of the universe, to the resurrection of Jesus Christ... watch as Bob takes on an atheist, discussing the evidence of the existence of God. This video has a very dramatic conclusion.

Evidence Against the Big Bang: When people wonder what evidence exists for the Big Bang, many ask Google. And not surprisingly, when folks search for: evidence against the Big Bang, Google sends most of them on over to Real Science Radio's List of Evidence Against the Big Bang. Yet this is surprising: When NASA urges you to trust the theory because of its confirmed "predictions", folks who Google: big bang predictions, also find RSR's article ranked #1! This video can help prepare you for the coming revolution in cosmology. The nine pieces of evidence presented herein are bringing people out of the failed science of the 1900s and into the 21st century demanding truth regarding both the origin of universe and ultimately, the origin of ourselves. And now, let's leave out the word "predictions" and leave out the word "against". Increasingly, when scientists and others just Google: big bang evidence, the search engine is sending them on over to RSR's evidence AGAINST the Big Bang! So whether you are a creationist or even if you're dug in still defending the old scheme on the origin of the cosmos, you'll want to watch this video to catch up with the latest amazing science on the big bang!

Trading Genesis: Pepperdine University in California has long enjoyed a reputation as a leading conservative Christian institution. Today, however, Pepperdine’s faculty teaches theistic evolution. Though affiliated with the Church of Christ, the theistic evolution of the school’s science and theology professors is indistinguishable from the methodological naturalism of the atheist. In 2015, the administration denied a request by some Pepperdine alumni to present a lecture on biblical creation. Not deterred, both longtime and recent graduates organized their own creation-evolution conference on the school’s campus and advertised it in the Malibu Times newspaper.  The organizers invited Bob Enyart, the host of Denver-based Real Science Radio, to speak at the event held concurrently with the school's heavily-attended Bible Lectureship series. Enyart demonstrated with seven examples that the atheistic materialist worldview does not even have a theory of origins for anyone to side with. And thus, Pepperdine University has traded away special creation (and many other biblical teachings, also listed in this presentation) for absolutely nothing.

And as you're out sharing the Gospel, always remember to do right, and risk the consequences.