A hermeneutic is a tool for interpreting the Bible that students use to better understand the Scriptures. Proper hermeneutics are invaluable. "Of all Bob Enyart's materials, the Hermeneutics Seminar is the best!" says Brian of Thornton, Colorado, a caller into the BEL radio program. Filmed at Denver's famous Brown Palace Hotel, Bob presents the most important hermeneutics, discusses their misuse, and gives examples of how to use them properly. This fascinating Bible study is available on MP3-CD or MP3 download. You can click to order online or call us at 1-800-8Enyart (836-9278) and either way you'll also get the extensive seminar handout and the slides that Bob presented to help folks remember each of the hermeneutics and how to use them.

At Bob Enyart's Hermeneutics Seminar the group studied not only the following list of hermeneutics but also the importance of the order in which they are presented and prioritized while interpreting Scripture. Here they are:

God: existence, eternity, and entity (i.e., the Godhead, as in Romans 1:20)
His Story: the plot, storyline, historical narrative (grasping the Bible's overview is the key to its details)
His Nature: living, personal, relational, good, and loving (includes J.O.N.A.H. & N.O.A.H.)

A BEL listener in Nashville tells people who ask if his son Jonah was named after the book in the Bible: "No, he's named after a hermeneutic!" These first three hermeneutics experience a "plot twist" of sorts in their ordering (see below).

Christological: Christ-centered, the text is His Word (the work of the righteous, and hatred of the wicked)
Context prioritized: God's Existence; Nature; Story; the dispensation; book; chapter; paragraph; sentence
Literalness: Scripture presents a literal message, and contains figures of speech, symbols, parables, and poetry
Historical/Grammatical: method emphasizes original languages, cultural and historical setting
Covenantal vs. Dispensational Principle: Paul instructs students to "rightly divide the Word" 2 Tim 2:15
Prophetic: Speaking God's Word; also, predictive prophecy; and non-prophecy (predictive only in hindsight)
Sufficiency Principle: Scripture presents ample revelation on everything vital to our spirituality (accountability)
Spiritually Discerned: God gave His Word to the world to lead men to Christ, but much is written to His own
Typology: people, events, objects, rituals, etc. serve as symbols of Christ, salvation, heaven, etc.
Inerrancy: Not translators and scribes but the original autographs (like DNA) were breathed by the Holy Spirit
Numerology: numbers at times are symbolic: 3 for God, 6 for man, 12 for Israel, 40 for judgment, etc.
First-Mention: knowledge of good and evil leads to death; seed of the woman; justification by faith
Hebrew Parallelisms: poetry; couplets; alternation; inversions; story symmetry

* Reordering the Second and Third Attributes: By special revelation God gave to mankind the Bible. Its story (its plot) reveals much more about the Nature of God than could otherwise be discerned from only the general revelation that comes to man through the creation. So because the Scripture reveals much about God's nature, as believers study the Bible, the previous two hermeneutics switch their rankings, and His Nature begins to take precedence over His Story in our efforts to understand the finer details (i.e., most of the doctrines) of Scripture. For of course the Nature of God, being eternal, precedes the revelation of the Bible to mankind. Because God's Nature is of course consistent with Scripture, His Nature therefore should take precedence and be foremost in the mind of the interpreter and constrain his understanding of every passage. For example, if the overview of the Bible showed God to be arbitrary and capricious, then regarding any given passage, an interpretation that claimed God was behaving in an arbitrary and capricious matter would be consistent with that nature. Whereas, if the story of the Bible reveals God to be fundamentally different than Zeus and not at all arbitrary and capricious, then that would constrain the interpretation of countless passages. We should therefore conform our interpretation to be consistent, not with any commitment to the philosophical system of Plato, but with the God of Scripture who does not show partiality. The Bible quotes the prophets and the apostles, but it also quotes the wicked. Any proper understanding of such texts, and even perhaps of why they were included in the Bible, will be consistent with the nature of God. So, as the Christian matures in His understanding of the Word, he increasingly constrains his understanding of everything in Scripture (and in life) to be consistent with his deepening understanding of the Nature of God. Thus, the order of the three greatest hermeneutics becomes: 1st) God; 2nd) His Nature; and 3rd) His Story. Applying this will help, for example, in the study of the book of Job with its passages that have challenged many students. A proper evaluation of the claims of Job's "counselors", including whether each piece of advice they offer is valid or not, will be constrained by the actual events, i.e., the story, of Job's life as revealed in the first two chapters. As our BEL verse-by-verse study of Job demonstrates, this simple hermeneutic has a significant impact on the understanding of the entire book 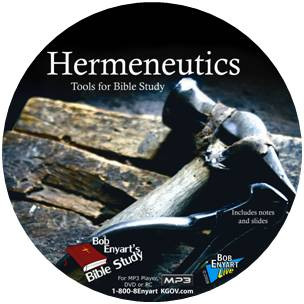 * Historical Narrative vs. Abstractions: Consider the difference between the mere statement that God hates sin, which is an abstraction, as compared to Him inspiring Moses to record the narrative about when God destroyed mankind in the global flood because of their wickedness. Likewise, the Ten Commandments are primarily abstractions. Contrariwise, many accounts of sinners violating God's law and the resulting consequences are narratives that occupy far more pages of Scripture. Many hundreds of chapters in the Bible, including almost all of the Gospels, Christ's birth, life, death, and resurrection, are presented not as abstraction but as narrative. These biblical narratives provide the best way to interpret, that is, to understand, the abstractions that do appear in Scripture. How so? If a Bible verse contradicts a doctrine, a theologian may attempt to dismiss the passage as a figure of speech. However, when God performs an action, an action cannot be a figure of speech. So when God repents that He made Saul king, and then He actually deposed Saul, and anointed David to replace Saul, those are not merely words. They are actions. Thus, while it is done commonly, no one should dismiss the literal meaning of a passage (relegating it to a figure of speech), when in fact it is an action that is being dismissed. See for example opentheism.org/verses#removing-saul.

* Other Even More Obvious Hermeneutics: The many other especially obvious hermeneutics include that absence of evidence is not evidence of absence. If the text says only, Do not covet your neighbor's wife (Ex. 20:17), that does not mean that it's okay to covet the husband. If the context of an instruction regards, say, unbelievers (1 Cor. 7:15), that does not necessarily mean that something said there (about a departing unbelieving spouse) is not true also for a believing spouse. If certain particulars are mentioned regarding some things (Lev. 23, special non-weekly sabbaths), that does not mean that those particulars cannot be true of other things (special non-weekly sabbaths for the feast of unleaven bread for example). Etc.

You can join Bob's Hermeneutics Seminar via CD! it's like you're there! Just click on the CD image label (or here) to enjoy our full-length Bible seminar including the same notes handed out to the attendees and see the slides Bob displayed during this great event at Denver's historic Brown Palace.