* More Facebook Anti-Conservative Christian Bias? In light of the news that Facebook slants trending news stories to the left, removing Ted Cruz reports, etc., Bob Enyart tells the audience that Facebook is rejecting his State of Colorado issued Driver's License as a valid form of identification. After Facebook erroneously took down conservative Christian Bob Enyart's personal FB page using the excuse that he was not Bob Enyart and that he was someone impersonating Bob Enyart, Bob appealed that decision. Facebook responded saying that Bob could show that he really was Bob Enyart by scanning and emailing to them a government-issued photo ID. See below Bob's driver's license that he sent to Facebook, and a FB representative, "Rice", responded that Enyart's Colorado Driver's License does not meet their standard as government issued identification. Right. Because. Enyart. Is. A. Conservative.

* See Facebook Refusing Conservative Pastor's Driver's License as a Valid Form of ID: Bob had not blanked out, as below, his photo and details on the repeated emails to Facebook of his Colorado Drivers License... 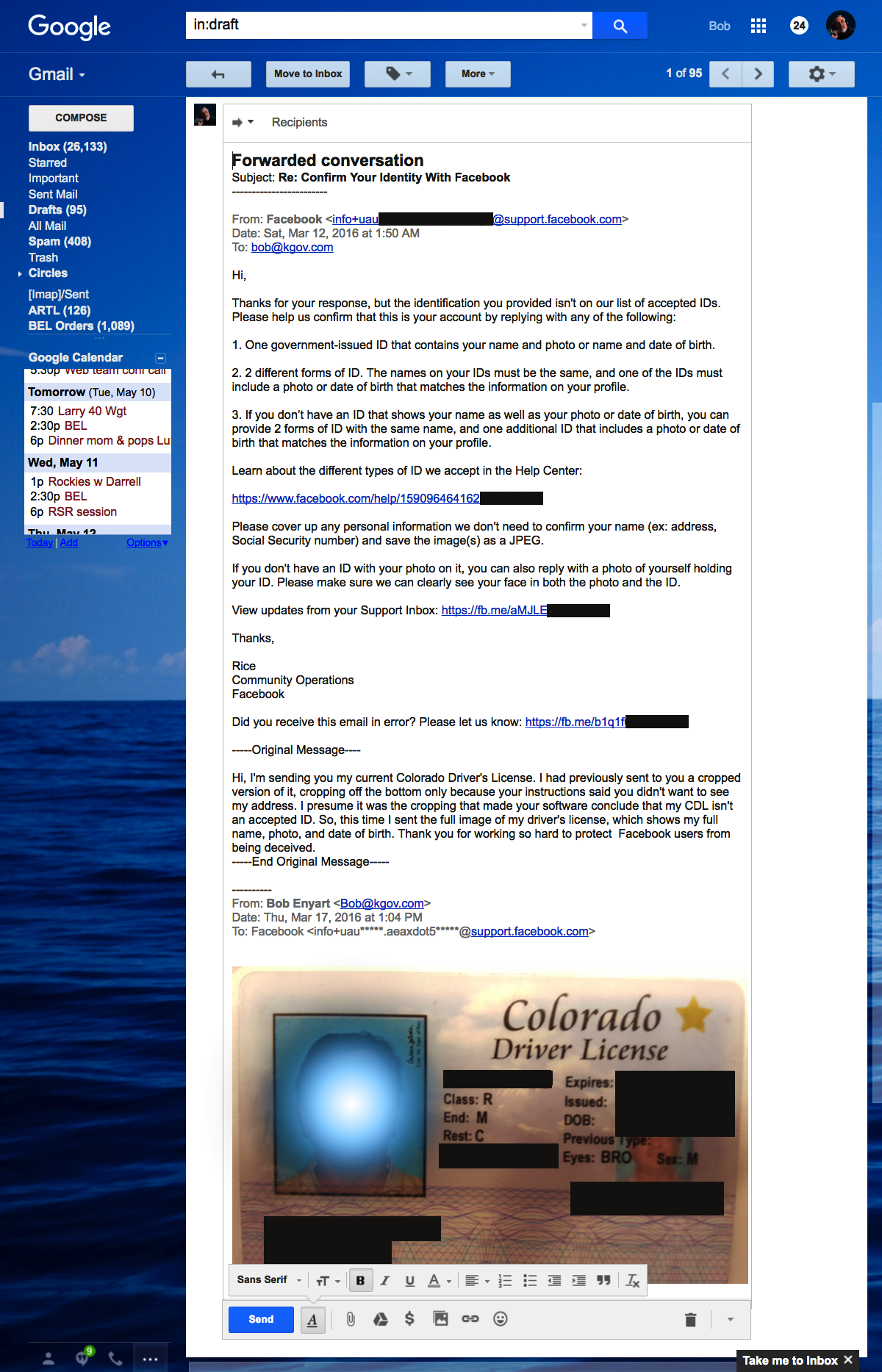 * The Mother of All Battles: appears to have taken place in Chicago over the Mother’s Day weekend. Listen in as Bob Enyart and co-host Doug McBurney provide coverage of the eight dead and forty wounded. See our List of Ways Christians Can Reduce the Crime Epidemic over at kgov.com/crime (and don't expect items like forgive, don't judge,  and all sins are equal, because they're not on the list).

* Caller to Kafer: Hear a caller quote the Matthew 20 Parable of the Workers in the Vineyard for the benefit of radio host Kelly Kafer, (and hear about the impact Bob’s ministry has had on this caller's life).

* 2021 Update Public Cmt to Facebook Oversight Board: The independent "Oversight Board" with authority to reverse Facebook decisions has taken up the platform's Trump ban and asked for public comment. Here's mine:

Details: Many conservative Christians are certain of Facebook's bias against them because of incidents like this: As a popular conservative Christian daily talk radio host for 30 years on Denver's 50,000-watt AM 670 KLTT radio station, Facebook employees deleted my popular page claiming that I was "impersonating" myself, Bob Enyart. That surprised my wife. The appeal process asked for a "government issued photo ID". As explained at https://kgov.com/facebook I uploaded my current Colorado drivers license. Being a conservative Christian (and pastor of Denver Bible Church) I was mocked by FB employees who told me that this did not qualify as a government issued photo ID. Right.

Secondly and lastly, millions of conservatives are certain of Facebook's bias against them and against their political leaders, their media outlets, etc., as they can cite from memory the public and aggressive comments by left-leaning political leaders
a) claiming that the 2016 election was illegitimate and
b) defending and encouraging the 2020 summer of violence.

You're all a bunch of hypocrites. Tens of millions of Americans know it. On America's most-powerful Christian radio station, I've strongly opposed Donald Trump consistently and frequently from the day he announced his candidacy until now. Yet Facebook's bias in favor of leftists who undermine law and order, and in favor of media outlets who report on "mostly peaceful" riots, and in favor of a vice president and congresswoman (Harris & AOC) who raise bail money to get violent rioters out of jail so the arsonists could burn down more buildings and continue to undermine the government, tells us with certainty that banning Trump's Facebook account has almost nothing to do with what's he's said but everything to do with what Facebook is. 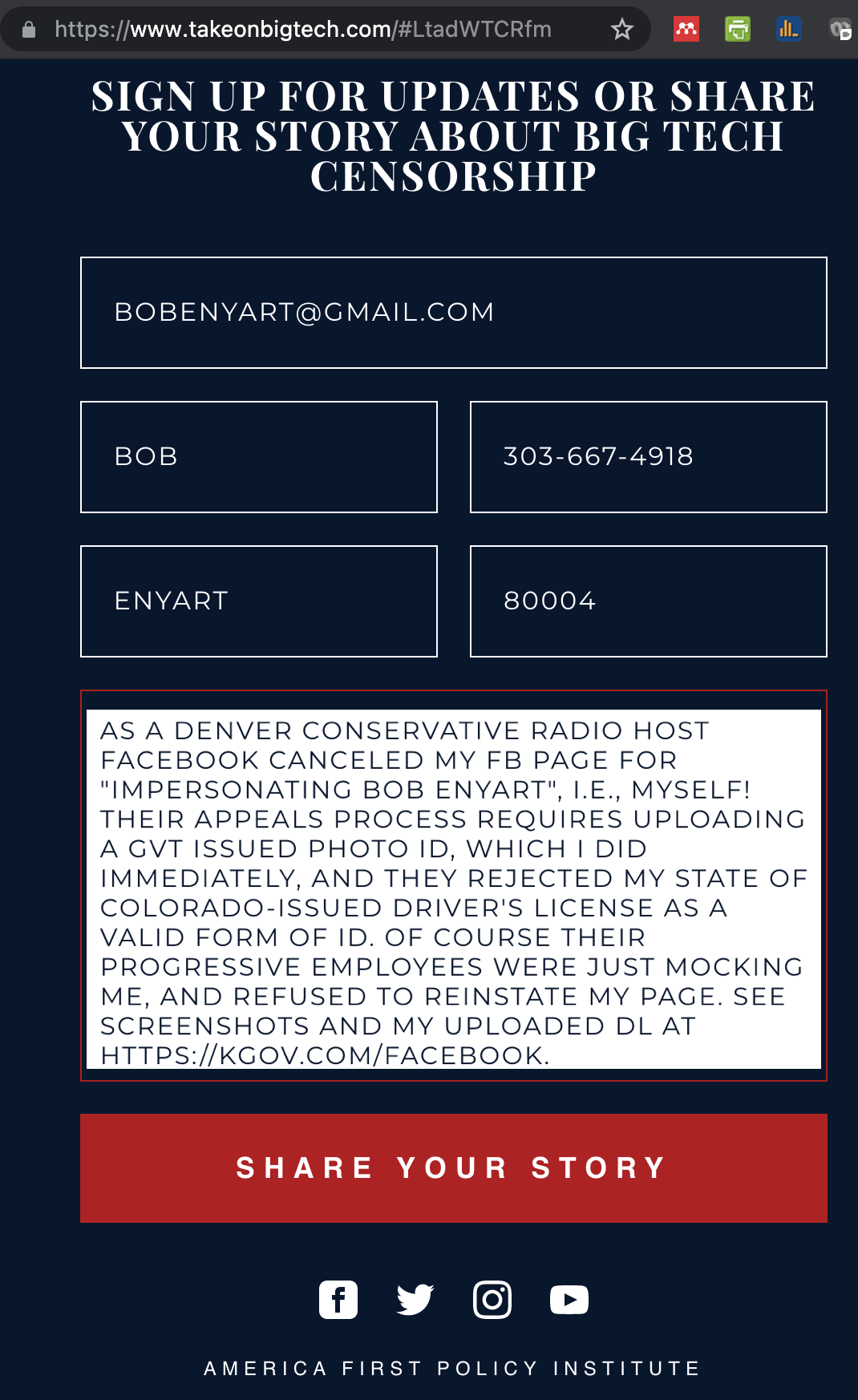