* Waiting for it to Drop: And it's a really big shoe! Is Evo Devo killing Natural Selection? Listen in as Real Science Radio co-hosts Bob Enyart and Fred Williams enjoy the September 2009 Creation magazine! The pro-evolution magazine New Scientist rejected one of Darwin's two major theories when they published their cover story: Darwin Was Wrong about the Tree of Life, which theory they indicated was as important as his theory of Natural Selection, because without Darwin's Tree of Life developmental pathway theory, his idea of Natural Selection would never have been accepted, they say. 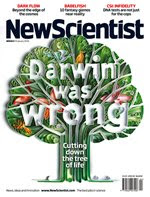 * Why have evolutionists turned against Darwin's Tree of Life? Because of the thousands of species genetically evaluated, more than half are clearly not the product of a developmental biological pathway represented by a tree (or a bush, or any other hierarchical scheme for that matter). Now the second shoe is dangling. Geneticists have found the basic blueprint for the overall animal kingdom in virtually every creature they've investigated! Now Darwin's second shoe is about to drop. For if evolution were true, then by the genetic mapping of the animal kingdom, it is becoming obvious that millions of years before creatures with structures like eyes, hearts and limbs had evolved, the sophisticated regulatory genes that develop those structures had already come into existence! Ironically, survival of the fittest will see the death of the unfit theory of Darwinism, because by the relentless march of scientific observation, countless evolutionists will be compelled to admit that it simply does not fit the evidence. And thus: Darwin Was Wrong about Natural Selection! For if evolution were true, then sophisticated regulatory genes appeared 50 million years before they were needed. So there would have been simply no role for a selection-for-survival mechanism. Normally, it's three strikes and you're out. But Darwin's dead, so he only gets two.

* Kangaroos: The director of Australia's Kangaroo Genomics Centre, Jenny Graves, says that, "There [are] great chunks of the human genome… sitting right there in the kangaroo genome." And the 20,000 genes in the kangaroo (roughly the same number as in humans) are "largely the same" as in people, and Graves adds, "a lot of them are in the same order!" CMI's Creation editors add that, "unlike chimps, kangaroos are not supposed to be our 'close relatives.'"

* Ira Flatow of NPR's Science Friday: is not much like a kangaroo, regardless of what he might think. But Ira can consider reporting on this kangaroo finding. He could tell his audience that:
- when he told them that humans are 98% similar to chimps (a now disproved, yet exaggerated claim even at the time) and
- when he used that as evidence that we were evolutionarily closely related to chimps,
Flatow should now acknowledge the error. Evolutionists should be able to admit that since "organisms as diverse as leeches and lawyers are 'built' using the same developmental genes," that:
- with the death of Darwin's Tree of Life, and
- with the regulatory gene blueprint throughout the animal kingdom (update: including in sponges), and
- with Kangaroo genes showing such extraordinary similarity to humans,
the bottom line is that Darwinists were wrong to use that kind of genetic similarity as evidence of a developmental pathway from apes to humans.

* RSR Flashback: Worms and humans having about the same number of genes. How can that be? According to Nature.com and ScienceDaily.com, human genes are heavily multitasking, which helps explain the many years of confusion among evolutionists who thought that humans and chimpanzees were 95% alike.

* ATP Energy Packs: Bob and Fred talk about Brian Thomas' fabulous Creation article on ATP synthase, the world's tiniest rotary motors, the majestic molecular machines made by the Mastermind, motors that constantly churn out trillions of energy packs needed to power living cells! [UPDATE: An evolutionist at TheologyOnline.com, Alate_One, says that our circular dependency argument, against the evolutionist claim that ATP synthase might have evolved from the mechanism that unwinds DNA since ATP is needed for that function, is invalid because ATP is available to the cell from sources other than ATP synthase.]

* David White's Evo Devo Article: Bob and Fred relate the stunning genetic blueprint information that David White (B.Sc., Genetics) included in his article, Climbing Mount Improbable "Evo Devo" Style! As it turns out, God laid out a basic genetic blueprint that He coded into virtually the entire animal kingdom, and from that big batch of basic raw materials, He masterfully chooses which genetic resources He'll use to implement a dolphin, a lion, and a squid, and a million other creatures! Way to go God!

Today’s Resource: Have you browsed through our Science Department in the KGOV Store? Check out especially Walt Brown’s In the Beginning and Bob’s interviews with this great scientist in Walt Brown Week! You’ll also love Dr. Guillermo Gonzalez' Privileged Planet (clip), and Illustra Media's Unlocking the Mystery of Life (clip)! You can consider our BEL Science Pack; Bob Enyart's Age of the Earth Debate; Bob's debate about Junk DNA with famous evolutionist Dr. Eugenie Scott; and the superb kids' radio programming, Jonathan Park: The Adventure Begins! And Bob strongly recommends that you subscribe to CMI’s tremendous Creation magazine!

* Help Colorado RTL Get Signatures: If you live in Colorado, could you help circulate the Personhood Colorado & CRTL 2010 petition? We need your help! If you live in any other state, can you help to advance personhood via the 2010 ballot or in one of three different ways?

* THANK YOU FROM BOB ENYART! Our 2009 KGOV Telethon raised $38,225 of our $40,000 goal for vitally needed funds to keep BEL reaching out over the Internet for another year! Thank you all so very much! And what's more, two businessmen who enjoy BEL (one owns a farmer and the other a high tech engineering firm) each said they would be sending a donation in for the telethon and so there's a real possibility that we'll meet or exceed our goal! Thank you Lord!