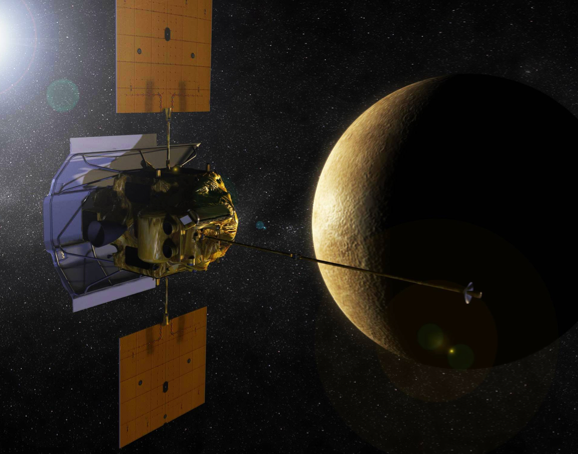 * Boy do the atheists have a problem: Real Science Radio co-host Bob Enyart interviews physicist Russell Humphreys on the Earth and Mercury's rapidly decaying magnetic fields, and on Dr. Humphrey's fulfilled predictions about the magnetism of the distant planets Uranus and Neptune. With Earth losing 10% of it's magnetic field in just the last 150 years, and Mercury's even faster drop, materialists have to appeal, once again, to claims of wildly coincidental occurrences to explain our observation of such rapid loss on planets that are allegedly billions of years old.

* South Atlantic Anomaly: The SAA hole in Earth's protective magnetic field is so severe that when passing through the Hubble takes no photographs and instruments on traversing satellites routinely experience minor malfunctions. Previously believed to be an extremely temporary phenomenon, in 2015 Nature Communications published archaeomagnetic evidence of "the antiquity of the South Atlantic Anomaly" going back a thousand years with a rapid decrease in field strength roughly around 450 AD, 750 AD, and 1300 A.D. The evidence points to "something unusual about the core-mantel boundary under Africa" yet that part of the Earth is allegedly over four billion years old. Especially knowing that 90% of Earth's radioactivity exists in the continental crust (and preferentially near granite), the inner Earth should have reached equilibrium billions of years ago. So if this anomaly exists at the core-mantel boundary, that's more evidence, along with dinosaur soft tissue and carbon-14 in diamonds, against vast ages.

And there's the concurrent record-breaking speed of the movement of the magnetic north pole now at 55 km per year and headed toward Siberia. (If you have a link to an authoritative report on this, please send it along to Bob@rsr.org. Thanks!)

* From the Popular RSR Site YoungEarth.com: A here's more on planetary magnetic decay...

* Earth's Magnetic Field Decay: As summarized by University of Maryland geophysicist Daniel Lathrop, “In particular, over the last 150 years or so, the Earth’s magnetic field has declined in strength about ten percent, and continues to decline in strength [as is evident] every time people go and make new measurements.” Creationists point out that this rapid decay is not expected in such a brief snapshot in time if our planet were 4.6 billion years old. On the other hand, these careful, long-term, and worldwide measurements that document the rapidly decreasing strength of Earth's magnetic field are consistent with a young Earth. Lathrop, not surprisingly, is an old-earth geophysicist who nonetheless acknowledged this data at the opening of and midway through the 2013 program Magnetic Shield, an episode of The Weather Channel's Secrets of the Earth with theoretical physicist (emphasis on the theoretical), Michio Kaku.

Creationist physicist Russell Humphreys of Sandia National Labs has updated his previous work by publishing Earth's Magnetic Field Is Decaying Steadily, which includes global data through 2010. Humphreys observes that, "in 1968 the International Association of Geomagnetism and Aeronomy (IAGA) began more systematically measuring, gathering, and analyzing geomagnetic data from all over the world. This group of geomagnetic professionals introduced a 'standard spherical harmonic representation' of the field called the International Geomagnetic Reference Field, or IGRF. Every five years starting in 1970, they have published both dipole and non-dipole components of the field. Using older data, the IAGA also extended the model back to the beginning of the twentieth century. With the issuance of the latest data set, IGRF-11, we have a standardized set of geomagnetic data from 1900 to 2010. You can download it free of charge as an ASCII file..." (Incidentally, Humphreys also published accurate predictions of the magnetic fields of Neptune and Uranus before NASA's Voyager mission confirmed his work.)

The steady and rapid decay of the energy of the Earth's magnetic field as documented by the most careful measurements over the forty-year period from 1970 to 2010 is also consistent with previous published results using data going back to 1835, and by inference from other observations, apparently, going back to the 1100s A.D. Further, as with forensic accounting and statistical analysis, numbers can often tell a lot about data, and in this case, analysis of the field strength measurements helps to confirm the validity of the data. Humphreys writes further that the decay patterns, "weigh heavily against the idea that there is currently a 'dynamo' process at work in the core that would ultimately restore the lost energy back to the field. Without such a restoration mechanism, the field can only have a limited lifetime, in the thousands of years." For example, if the energy of the field has been dissipating at the current rate, going back only a million years would produce such heat that the oceans would have burned off the Earth, which clearly they have not.

* Liquid Iron Properties Undermining Dynamo Theory: As highlighted by the world's greatest living scientist Dr. Walt Brown in the online updated edition of his book, In the Beginning, from 2012 in the journal Nature:

New calculations show that the electrical resistance of Earth's liquid-iron core is lower than had been thought. The results prompt a reassessment of how the planet's magnetic field has been generated and maintained over time. ...the thermal conductivity of liquid iron under the conditions in Earth’s core is several times higher than previous estimates. ... Such large thermal conductivities allow a substantial amount of heat to be carried by conduction, leaving less heat to drive convection. Convection may even cease in parts of the core. ... the properties of liquid iron make the operation of magnetic dynamos in terrestrial planets even more precarious than was previously believed. We are left with the challenge of understanding how Earth has succeeded in maintaining its magnetic field over most of geological time.
- Bruce Buffett, Geomagnetism under Scrutiny, Nature, May 2012

The science press in 2014 summed it up correctly:

But here is the fundamental problem with our understanding of the geodynamo: It can’t work in the way geophysicists have long believed.
- Tim Folger, Journeys to the Center of the Earth, Discover Magazine

* See Also the RSR Mercury Report: For about a ten percent decrease since the 1980s, see at rsr.org/mercury#magnetic-field the example of a second solar system planet experiencing a rapidly decaying magnetic field.

Here's the point: As with dozens of examples in our solar system identified at rsr.org/transients, a four-billion year old Earth would have reached stasis long ago whereby changes in something as globally significant as its magnetic field would occur only very slowly. And since the Earth could not sustain the necessary increased energy backward in time for even a million years, let alone billions, to explain its current strength and decay rate, this is significant, worldwide evidence that appears to undermine the alleged great age of the Earth.

* Exercise for the Student: The laboratory experiment represented in the above photo has, or has not, provided evidence in support of the old-earth "dynamo theory"? (Over at TheologyOnline.com, old-earther gcthomas responded to this exercise, as did atheist Jukia to this whole program. See their comments and Bob Enyart's replies on behalf of Real Science Radio.)

* The Hydroplate Theory Special: You may want to purchase this set of resources if...
1) You'd like to read the best creation book ever written and watch its accompanying videos
2) You like Real Science Radio and want to help it stay on the air
3) You'd like to give the gift of understanding creation and the flood to someone who could really benefit from it.