Doug Axe on RSR on his Historic Discovery of Protein Structure 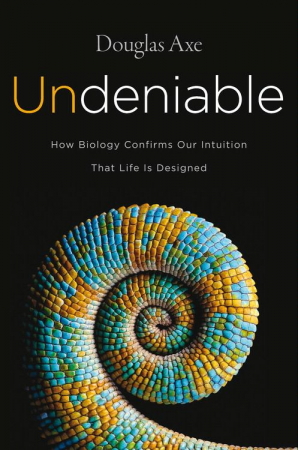 * A Place in the History of Molecular Biology: At Cambridge University, anti-Darwinist Douglas Axe worked for some of the world's leading molecular biologists in the laboratory established by four Nobel laureates including the guys who discovered DNA's double-helix. Decades after Watson and Crick broke the field of molecular biology wide open, evolutionists at Cambridge were still publishing the claim that the recipe for building proteins had just a couple of rudimentary requirements. Doug's groundbreaking research showed that the "simple model" of protein construction was false. Further, shocking to evolutionists, Axe showed that the very particular order of hundreds of various amino acids was a very specific sequence needed for standard protein function (with a specific, different sequence needed for each kind of protein). Real Science Radio host Bob Enyart is honored to interview Dr. Axe!

* To Get the Book: You can purchase Doug's fabulous book wherever great boooks are sold including at Amazon.com or elsewhere as listed at the book's website, UndeniableDesign.com!

* The Richard Dawkins 3-to-1 Evolution Challenge: Research for a debate on the Bible led Bob Enyart and his associate Will Duffy to Oxford University. While there, thinking about the popularity of RSR's graphical evolution challenges, such as the Evolution Vision Challenge and about the success of our PZ Myers Trochlea Challenge (click for that evolutionist's reply), the guys decided to hand deliver to the Oxford office of professor emeritus Richard Dawkins a printed copy of RSR's Dawkins 3-to-1 Challenge. (Dawkins still lectures there for a course titled, Science Literacy: Evolution for Non-Scientists.) Intelligent Design arguments based on complexity, like the flagellum argument offered by Michael Behe, are powerful yet that very complexity provides opportunities for opponents to obfuscate. (For example, if a cellular component is assembled from twenty parts, an evolutionist can make somewhat irrelevant comments about two or three of those parts, and get millions of evolutionists to claim that he has refuted that design challenge.) Thus Real Science Radio has been testing arguments based on the simpler, rather than the more complex, aspects of organisms. It appears that these inherently simpler arguments may more effectively demonstrate the inability of the materialist worldview to explain biology. (Our Myers Trochlea Challenge is just such an argument, focusing on one of the simplest parts of the human vision system.) So the graphic that we delivered to New College asserts that neither Richard Dawkins, nor any materialist, will ever be able to answer this simple Dawkins 3-to-1 Evolution Challenge:

Today’s Resource: We invite you to browse the Science Department of our online store!