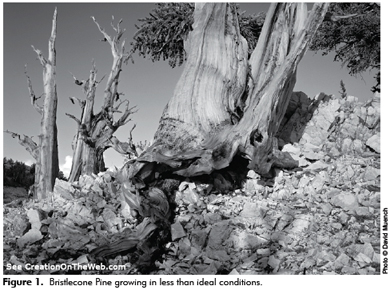 * Bristlecone Pine Tree Rings: do NOT provide evidence as claimed by evolutionists of an age for the Earth greater than the Bible's record. The refereed scientific Journal of Creation presents the overwhelming evidence that these trees growing in the arid White Mountains of California, one of the driest places on earth, grow multiple rings per year. Thus once again scientifically careful research, this time in dendrochronology, is consistent with biblical chronology!

* The Hobbit: Journal of Creation lists strong evidence that the pygmy-like skeleton from Indonesia is not a monkey but from a human being. For example, Robert Eckhardt, a professor of development genetics at Penn State, reports 140 cranial features that place the Hobbit "within modern human ranges of variation, resembling Australomelanesian [human] populations."

* Bob's Debate with Reasons to Believe: Fred and Bob discuss the moderated Age of the Earth Debate between Bob Enyart and a high school science teacher, against a geophysicist and a university mathematician! You can listen to the debate, and by popping the CD into a PC, you can also view the spectacular science slides to help you better understand the discussion!

* You Can't Put New Wine: in old wineskins, as the Lord said. And we see an application of that as Christian hospitals eventually begin doing abortions, publishers go secular, universities eventually go atheistic, and denominations eventually turn against God. In fact, the Denver Bible Church constitution calls for the ministry, after its third generation of leaders, to be closed down and any assets liquidated and funds transfered to a vibrant, young ministry. Consider that at death, our physical bodies yield to the relentless pull of gravity on our flesh, pulling us down toward the center of the world. The question is, how will that trend effect young-earth creation ministries? They are in no way above the sinful pride, etc., that threatens all ministries. Since creation ministries focus on foundational issues, will that keep them faithfully serving the Lord through more generations than other non-foundational ministries such as Christian hospitals, publishers, and universities? If the Lord tarries, then time will tell.

Today's Resource: At store.kgov.com we recommend the BEL Science Pack or a subscription to the BEL Televised Classics, Monthly Bible Studies, Bob's Sermons, or BEL Topical Videos! Or you can call us at 800-8Enyart!