Deep Wells--Deep Time? 14c There Too!

* Three Related Lines of Evidence Shoring Up the Young Earth Interpretation: The interaction between dinosaur soft tissue, unracemized left-handed amino acids, and Carbon 14 must all be explained to understand the true age of the geologic column. (1) Significant amounts of short-lived 14c is measured in diamonds, dinosaur fossils, natural gas, and coal. (2) There's mostly left-handed amino acids (not yet decayed to a 50/50 right-to-left ratio) in chert and dinosaur eggshells. (3) There's flexible and even transparent blood vessels, cells, and even T. rex and hadrosaur DNA (with a half-life of ~521 years) in dinosaur soft tissue fossils. Many such lines of evidence (multiplying as at youngearth.com) undermine the claim by old-earth geologists that the plentiful 14c in "ancient" specimens must come from contamination or neutron capture (see below), and this evidence helps to confirm the young earth interpretation of the data below. 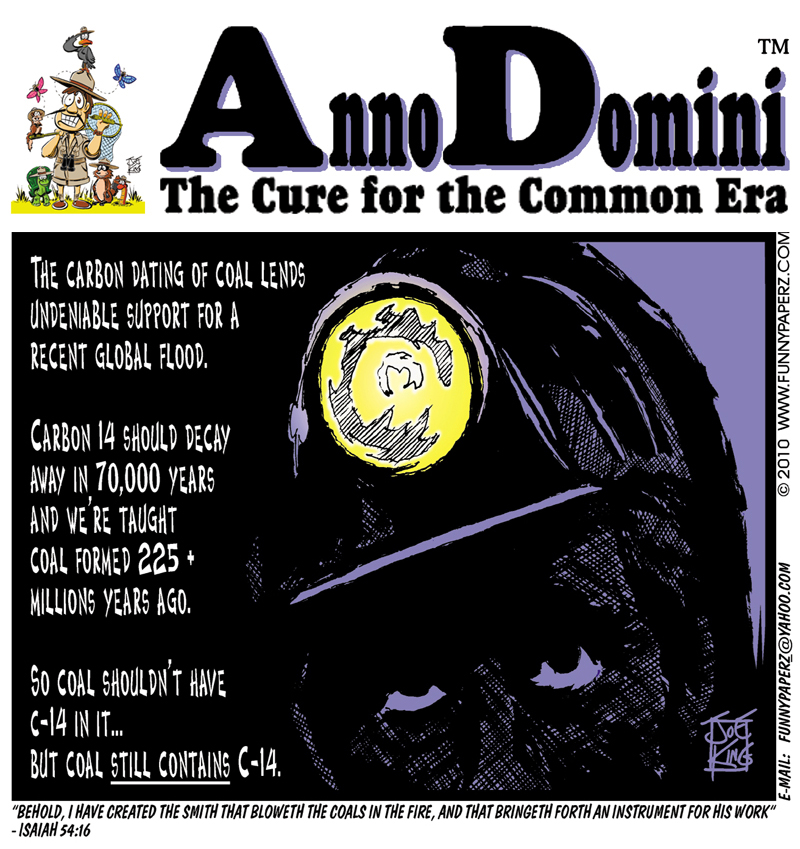 * A Less Familiar Source of 14C: Though it may be an extremely negligible source, of the various emissions from radioactive decay (alpha particles, beta particles, etc.), from a particular decay chain, it is possible that an entire 14c atom (6P, 8N, 6E) can be emitted as a unit in a single step. If you know of a web page where this is described, please email that link to Bob@kgov.com. Thanks!

* 14C in Dinosaur-layer Bones: RSR offered famed paleontologists Jack Horner and Dr. Mary Schweitzer a grant of $23,000 to carbon date their biological dinosaur tissue (YouTube video below), which money RSR saved thanks to Hugh Miller (above) and the rare studies that are just beginning to be reported finding significant quantities of modern carbon in allegedly ancient fossils that still contain original soft tissue! A Mosasaur shown by researchers to have original biological material and not  contamination, also contained five percent modern carbon! See more at Round Four of our RSR debate with atheist AronRa. We have a young earth!

* Earth's Decaying Magnetic Field Affects 14C Dating: Long-term, authoritative, and worldwide measurements show that the Earth's magnetic field is decaying rapidly (as NASA's data shows is also true of Mercury). Our planet's more powerful magnetic field in the past better shielded Earth from cosmic rays, resulting in less Carbon-14 production. This means that carbon ages of specimens from past millennia and even from only centuries ago need to be adjusted downward. So apart from adjustment for the exponentially decaying magnetic field, specimens are therefore younger than their radiocarbon age indicates. For, living with a stronger field, plants and animals absorbed less radiocarbon. So, in addition to the evidence for rapid radioactive decay at the time of the global flood, the Earth's decaying magnetic field means that specimens are generally younger than claimed by Carbon-14 dating. This effect may be significant going back even only to the time of Christ, and might also be a factor in why 14c dating of the artifacts of the Pharaohs were not as helpful as had been hoped for in resolving debates in chronology among Egyptologists.

* Left-handed Amino Acids: Scientists have been surprised to find primarily left-handed (i.e., unracemized) amino acids in specimens allegedly hundreds of millions of years old. Once an organism dies, its amino acids begin to return to their inanimate, 50/50 ratio of right- and left-handedness. Duane Gish, highly qualified to address the topic, points out that factors affecting a specimen, including variation in temperature and especially pH (acidity vs. alkalinity), can dramatically speed up the rate of racemization. Merely giving the old-age assumption the benefit of the doubt, however, by assuming the lowest reasonable alkalinity and temperatures for the life of the specimen, retains amino acid racemization as a powerful tool for falsifying million and billion year dates, especially when combined with extant soft tissue and plentiful radiocarbon. See more at RSR's List of Dinosaur Soft Tissue Papers. 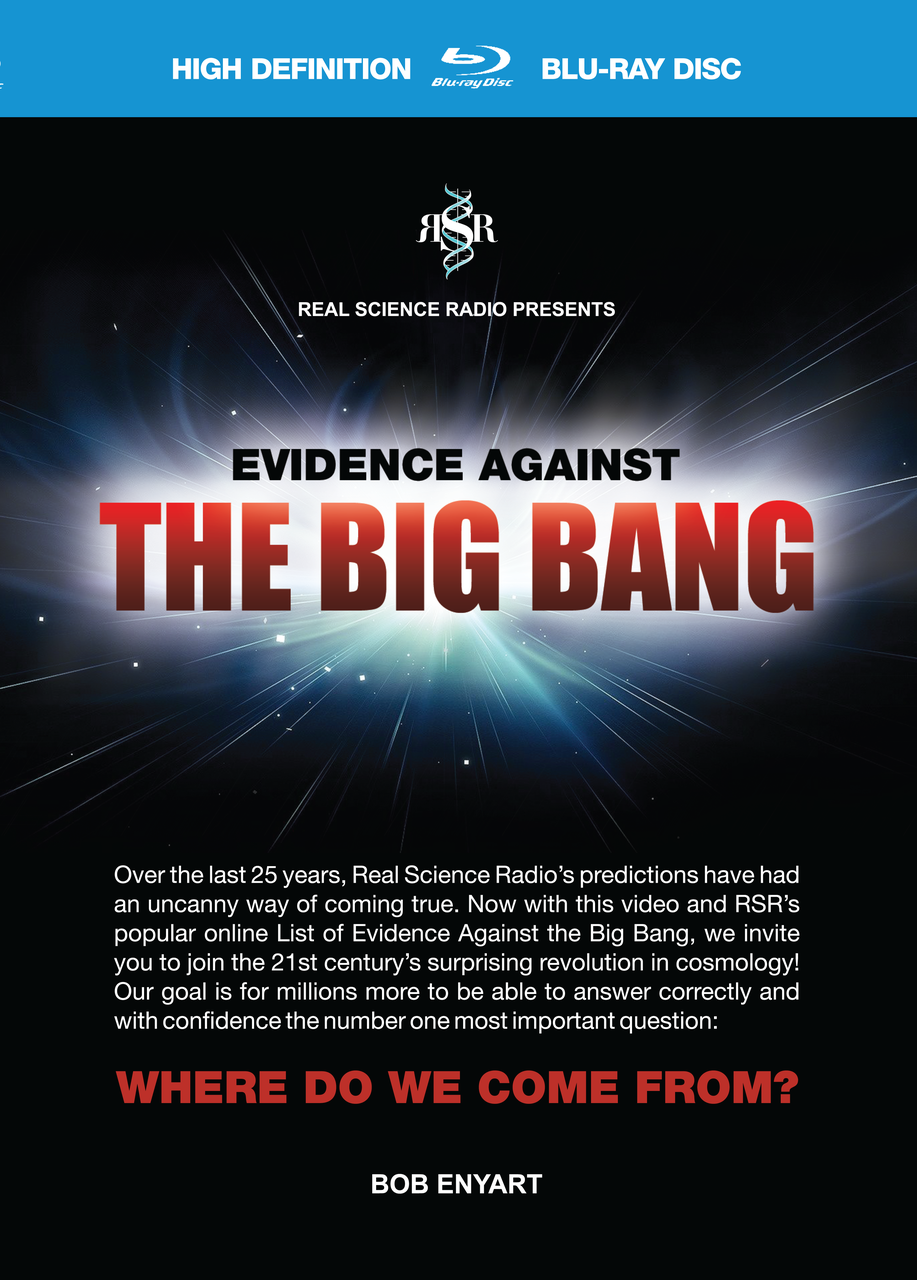 Today’s Resources: Get the Spike Psarris DVD What You Aren't Being Told About Astronomy and Vol. II, Our Created Stars and Galaxies! Have you browsed through our Science Department in the KGOV Store? Check out especially Walt Brown’s In the Beginning and Bob’s interviews with this great scientist in Walt Brown Week! You also might enjoy Bob Enyart’s Age of the Earth Debate against a well-known geophysicist and a University of Colorado mathematician who are members of the Denver chapter of Reasons to Believe. And Bob strongly recommends that you subscribe to CMI’s tremendous Creation magazine!

* YouTube Video of the RSR Offer to Jack Horner: Steven Spielberg had famed paleontologist Jack Horner on the set as a technical advisor during the filming of all three Jurassic Park blockbuster movies. This YouTube video presents the Real Science Radio phone call by which we offered Jack Horner a grant of $23,000 to carbon date either their Wankel T. rex or their pregnant (at the time of its death) B. rex. 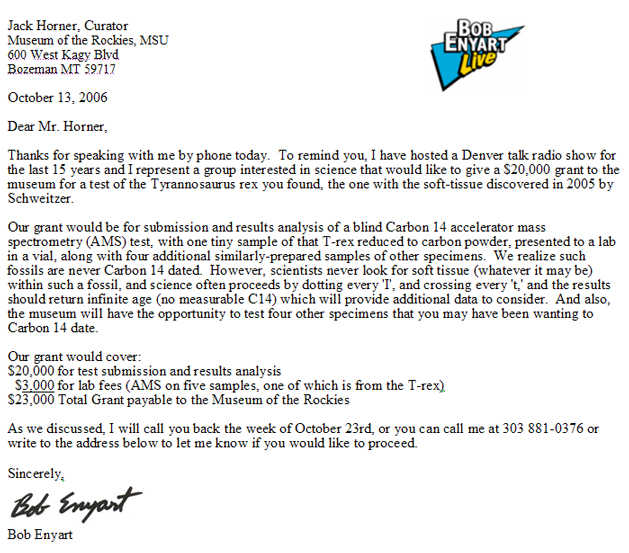