Co-hosts Fred Williams and Bob Enyart talk about last week's stunning peer-reviewed report of yet another soft-tissue discovery (after such finds from a T. rex, a hadrosaur, and archeopteryx). This time scientists from secular universities in Europe and America use sophisticated  techniques to rule out modern contamination, and conclude that original biological material exists from a relatively small bone from an allegedly 70-million year old extinct marine reptile called a Mosasaur. The electron microscope was invented in 1931 and even from 1903 the ultramicroscope could study objects smaller than the wavelength of light. Thus more than a century of lost opportunity has passed with perhaps millions of fossils improperly handled because evolutionary bias has been so stifling that countless scientists likely never even considered looking for original biological material. 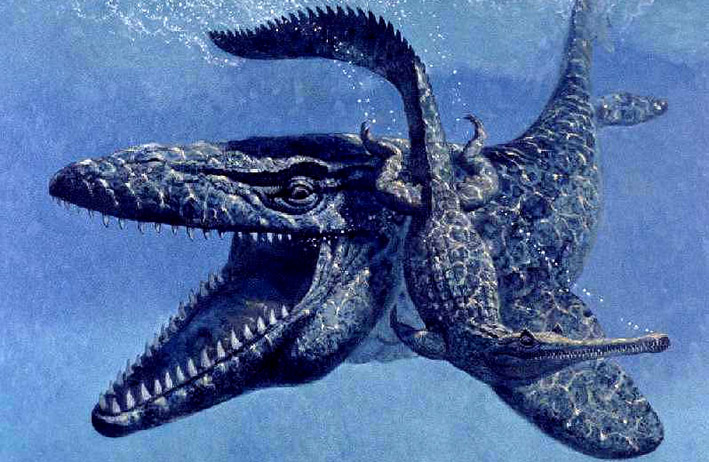 * Mosasaur Meets Real Science Radio: Bob asked long-time friend of BEL, Dave Willis from Indiana, to join the conversation about this latest news, reported also in Science Digest, May 2, 2011, for Dave has interacted at length with various scientists involved in the extraordinary discovery of proteins from what they call the Mesozoic Era. (As established by many proofs, see RSF's List of Not So Old Things, the Mesozoic Era was not an era but a rapidly-deposited sedimentary layer.)

* Complete Collagen Decay Expected in Thousands of Years: Dave Willis and Fred Williams talk about the calculated maximum survival time of collagen, not in millions but in thousands of years, according to a 2008 report in Science Magazine as it relates to the discoveries of soft dinosaur tissue. Further, consider this from a 2011 peer-reviewed paper published by a respected scientific journal, "...at a constant 10°C (the approximate mean annual air temperature in Britain today) it will take between 0.2 and 0.7 Ma [that's 200,000 to 700,000 years] for levels of collagen to fall to 1% of their original concentration in an optimal burial environment."

* And Now, Amino Acids Line Up to show a Young Earth: Amino acids, like hockey sticks, and like our own right and left hands, are symmetrical in that different ones exist in mirror images of themselves. When synthesized in the laboratory, they appear in equal proportions in their right- and left-handed forms. Likewise, when organisms decompose, their amino acids gradually racemize into equal portions of right- and left-handed forms. Yet, living cells build proteins with only left-handed amino acids. It is only after death that the inexorable process of decay begins to racemize (randomize) the handedness. Thus, with the report from the Royal Society of London a decade ago mentioning the unfinished racemization of amino acids in dinosaur eggs, creationists have been eager to show, as an additional confirmation that dinosaurs did not live millions but only thousands of years ago, that the amino acids in soft-tissue fossils will not have reached their natural 50/50 ratio!

* Abiogenesis and Left-handed Acids: Consider that, if the big bang theory were true, then the universe would have equal amounts of matter and antimatter, yet it does not. Biology has a parallel to this. For like matter and anti-matter, the amino acid building blocks of proteins exist in right- and left-handed forms. (Of the 20 different protein-building amino acids, only glycine does not have symmetrical forms.) So if the materialist claim of abiogenesis were true, then proteins would be formed of equal amounts of right- and left-handed amino acids, yet they do not. So these two fundamental predictions of the materialist theory of origins have been falsified. Further, the mathematical probability that a non-directed origin of life would build proteins with only left-handed acids, rather than with an even combination of the two, adds astronomical impossibiiity to astronomical impossibility. And even if a materialist cause could overcome the virtually infinite odds against stringing together a left-handed chain, it must still get the twenty different amino acids in a correct functional order, and then somehow fold them correctly, and if all that happened, still, it would result in only a single dead protein.

* Rutgers Biology Prof. Keosian Vindicates RSR Assessment: According to John Keosian, former Professor of Biology at Rutgers University, for any materialist believing that abiogenesis happened by "the accidental formation of a highly complex molecule through the random collisions of atoms and inorganic molecules. Such an event, as the basis for the origin of life, is an event of zero probability." Fourteen years earlier Keosian had been the optimistic naturalist who wrote 1964's The Origin of Life but by 1978 he authored, The Crisis in the Problem of the Origin of Life published in the proceedings of the Second International Society for the Study of the Origin of Life. Like Duane Gish before him, blogger Stephen Jones describes that paper as a "devastating critique of all fully naturalistic origin of life theories! It is significant that there appears to be nothing on Keosian that I can link to. It seems he has been expunged from the record because of his paper!" Enyart's assessment that a naturally occurring string of amino acides "would result in only a single dead protein" echoes Keosian's criticism years earlier of those who would disagree, that such a molecule would be "alive only by the author's proclamation". So an atheist like theoretical physicist Lawrence Krauss (emphasis on the theoretical) believes, without any evidence and against all calculations of mathematical probability, that abiogenesis happened. Atheists also claimed that an initial protein or enzyme that might form by chance chemical reactions would therefore be "alive." But for the sake of argument Keosian countenances the existence of such a naturally-forming, zero-probability molecule and points out that even then, it would not be alive in any sense other than that the abiogenesis proponent wants it to think of it as alive and thus declares that it living. Thus by the insights of this Rutgers biologogy professor, RSR's longtime description has been valid. The naturalist would still have nothing more than "a single dead protein."

Today’s Resource:  You'll just love the science DVDs, books, and written, audio or video debates we offer through our Real Science Radio broadcasts! So have you browsed through our Science Department in the KGOV Store? Check out Bob most highly-recommended astronomy DVD, What You Aren't Being Told About Astronomy! And see Walt Brown’s great hardcover book, In the Beginning! You’ll also love Dr. Guillermo Gonzalez’ Privileged Planet (clip), and Illustra Media’s Unlocking the Mystery of Life (clip)! You can consider our BEL Science Pack; Bob Enyart’s Age of the Earth Debate; Bob's debate about Junk DNA with the infamous anti-creationist Dr. Eugenie Scott. And if you have young kids or grand kids, you owe it to them and to yourself to give them as a gift the SUPERB kids' radio programming on audio CD, Jonathan Park: The Adventure Begins! And Bob strongly recommends that you subscribe to CMI’s great Creation magazine and if you're up to reading more technical scientific articles, you'll also want to subscribe to CRSQ! And to order any of our BEL science products by phone, just call us at 1-800-8Enyart (836-9278).

* Post-show Update: As an example of how difficult it is to determine the form of a creature from its skeleton, not until Nature Communications published a paper in September 2013 did paleontologists have an anatomically correct outline of the mosasaur. See the implications of this at rsr.org/dragons.