Bob Enyart interviews Darrin, professional airline pilot, who today took great drone footage of Colorado Right To Life's billboard downtown Denver. The guys mostly discussed the opportunities a pilot has to see firsthand the results of the global flood especially over the U.S. southwest and the Grand Canyon region. Darrin, saving the world one pilot at a time, shares the insights from Dr. Walt Brown's hydroplate theory with other pilots and enjoys being able to to answer questions from evolutionists and others about God, origins, and the Scriptures. The guys also discuss both attending Chuck Smith's Calvary Chapel Costa Mesa, their interest in Keith Green's music, and Darrin helping Bob train for the Mt. Ararat expedition that was canceled because of Turkey's coup. Finally, Bob mentions his call today to troubleshooter Tom Martino on a competing radio station.

* On Colorado's Western Slope: CRTL also put up a billboard just south of Pueblo, Colorado off of Interstate 25 and here's the same billboard message in Fruita near the Utah border on Interstate 70: 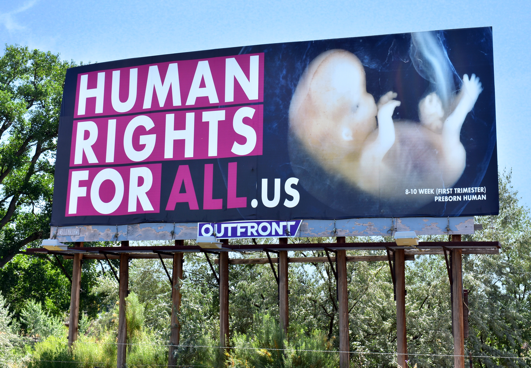 * CRTL's Billboard Two Blocks from Denver's Abortion Mill: Notice the Renaissance Hotel behind our billboard. Colorado's largest Planned Parenthood child killing center is adjacent to that hotel, just to the right of it in the photo (across the stree to the west)...