Cory Gardner: Save Self, Sacrifice Child

After exploiting the unborn child by getting the support of ardent right-to-lifers, Cory Gardner has now reversed course, just as many seasoned activists expected him to do once he viewed the baby's right to life as a political liability. Colorado politician Cory Gardner now says, “I was not right. I can’t support personhood now. I can’t support personhood going forward. To do it again would be a mistake.” For his justification he quoted from Planned Parenthood's own press release regarding personhood. Ultimately, he merely told us how he would vote regarding the Jews if he had lived in 1930s Germany, and if in Palestine, how he would vote before Pontius Pilate. 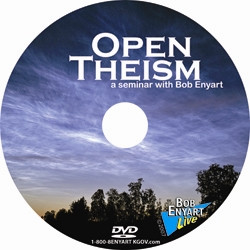 Today's Resource: Check out the format and perspective that's most helpful to your desire to evaluate these issues. At our KGOV Store: we have presentations on DVD called Chosen: It's Not What You Think, on Open Theism, on Predestination & Free Will  and a moderated P&FW Debate! You can also call 1-800-8Enyart (836-9278) to order or to talk with us about which of our DVDs, books, or CD audio teachings may interest you!

- OpenTheism.org
- Bob's classic Open Theism Debate with D. James Kennedy's professor of New Testament Dr. Samuel Lamerson.
- Our heavily Bible-based article, Is God In Or Outside of Time.
- A brief and fast-moving written Q&A between Will, a former BEL producer, and "Jaltus" in an Open Theism Debate with Will & Jaltus.
- Bob Enyart's debates with Dr. Larry Bray: The president of The North American Reformed Seminary (TNARS), Dr. Bray, twice debates Bob Enyart, the pastor of Denver Bible Church. The topics are: Is Calvinism Biblical? and Is the Future Settled or Open? (The host for these events, reformed believer David New, removed both of these debates from his site.