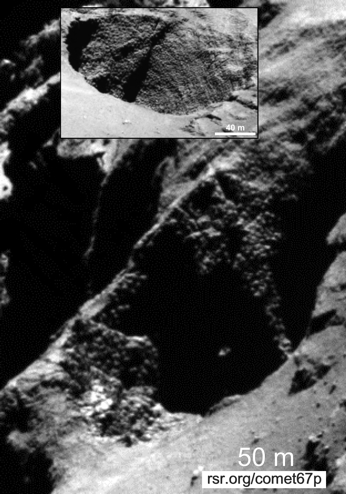 * Another Confirmed Prediction from Creationist Walt Brown: Regarding the confirmation of yet another astounding science prediction, Bob Enyart interviews Dr. Walt Brown, author of the hydroplate theory explanation of the global flood and the many resulting broken features of our Earth and solar system. The European Space Agency has just released high-resolution images of Comet 67P along with the assessment of their scientists that they may have found unexpectedly large rounded boulders (up to 10-feet in diameter) that may be the comet's building blocks! This interview presents this latest discovery which, though it has shocked so many secular astronomers, has confirmed Walt Brown's specific prediction, published 13 years ago in the 7th Edition of his book In the Beginning, about the composition of comets. See more at rsr.org/comets, rsr.org/predictions, rsr.org/solar-system, and you may want to investigate also the Itokawa asteroid.

* Landslide Filmed on Comet 67P: In a related story and now added to our RSR's List of the Solar System's Transient Events, the European Space Agency has filmed an actual landslide on Comet 67P. Just like every planet and all the other kinds of bodies in the solar system, this allegedly four billion year-old flying pile of rounded boulders produces transient events, that is, passing phenomena, like 67P's landslide and outgassing oxygen, that would be unexpected to see on billion-year-old objects. As for this landslide, of course stable cliffs are not easily built with rounded boulders, so happening to film a landslide as it happens is not shocking, as it is to old-earthers, but expected, as it is to students of the hydroplate theory! 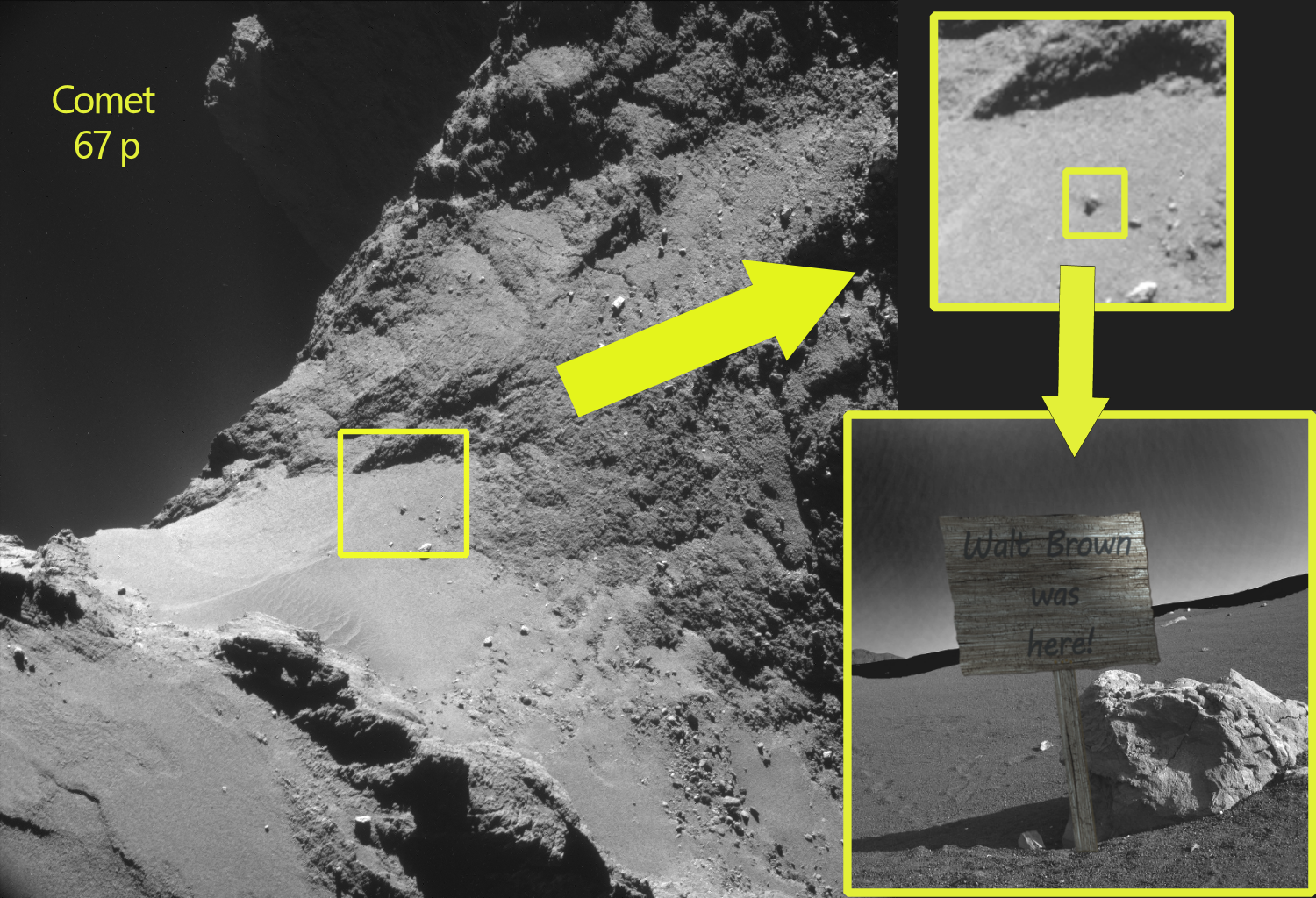 * Typical of the More than 1,000 Scientific References in Walt Brown's In the Beginning: From the references for his Comets chapter:

11. “But it was the components of the cliffs and pits that caught Sierks’ eye. Embedded along their edges are strange spheres, most between 1 and 3 meters in diameter.” Andrew Grant, “Comet May Expose Its Building Blocks,” Science News, Vol. 187, 10 January 2015, p. 8.

- “The researchers described three-meter-wide pebble-like features that are found all over the comet, which they nicknamed ‘goosebumps’.” Elizabeth Gibney, “Philae Hunt Hangs in the Balance,” Nature, Vol. 517, 29 January 2015, p. 536.

- “In the walls of other pits, OSIRIS [Rosetta’s powerful camera] has spotted what could be features dating back to the comet’s formation: what the team calls “goosebumps” or “dinosaur eggs,” nodules about 3 meters across that could represent the fundamental chunks of material that coalesced into 67P.” Eric Hand, “Comet Close-up Reveals a World of Surprises,” Science, Vol. 347, 23 January 2015, p. 358.

* RSR Volunteer Needed: RSR needs a transcript of the JPG image of John Buchanan's 1905 Letter to the Editor that's over at rsr.org/john-buchanan. If you will do this for us, please then email your transcript to Bob@rsr.org. Thank you! -The RSR Crew. DONE. Thank you RSR listeners!

* Today's Resources: Check out RSR's Global Flood & Hydroplate Theory video (on DVD, Blu-ray, or download). And you can enjoy the 6-disc standard audio CD set The Hydroplate Theory & Dr. Walt Brown on the Air or get the entire set on a single MP3 CD, both of which contain eleven radio programs. Bob Enyart also highly recommends Dr. Walt Brown's fabulous book, In the Beginning! Order by clicking the link, or calling us at 800-8Enyart (800 836-9278)!

And come on out to the RSR Big Bang Seminar in Indy on March 7th!

This is a Benefit Event to Raise Funds to keep BEL on the air
organized by our Indianapolis listeners!
Registration $100; children free.
If you can't afford the registration, instead of clicking,
please call 1-800-8Enyart and ask for our Workin' Man's discount! :)

Examples of the Evidence: From rsr.org/big-bang, Bob will use these astronomy observations:
- Mature galaxies exist where the BB predicts only infant galaxies
- An entire universe-worth of missing antimatter contradicts most fundamental BB prediction
- Observations show that spiral galaxies are missing millions of years of BB predicted collisions
- Clusters of galaxies exist at great distances where the BB predicts they should not exist
- A trillion stars are missing an unimaginably massive quantity of heavy elements, a total of nine billion years worth
- Galaxy superclusters exist yet the BB predicts that gravity couldn't form them even in the alleged age of the cosmos
- A missing generation of the alleged billions of first stars that the failed search has implied simply never existed
- Missing uniform distribution of earth's radioactivity
- Solar system formation theory wrong too
- It is "philosophy", not science, that makes the big-bang claim that the universe has no center
- Amassing evidence suggests the universe has a center
- Sun is missing nearly 100% of the spin that natural formation would impart
- The beloved supernova chemical evolution story for the formation of heavy elements is now widely rejected
- Missing uniform distribution of solar system isotopes
- Missing billions of years of additional clustering of nearby galaxies
- Surface brightness of the furthest galaxies, against a fundamental BB claim, is identical to that of the nearest galaxies
- Missing shadow of the big bang with the long-predicted "quieter" echo behind nearby galaxy clusters now disproved
- The mythical CMB prediction and other alleged confirmed big bang predictions that were never made
- Fine tuning and dozens of other MAJOR scientific observations and 1,000+ scientists doubting the big bang.