[Update: As of Jan. 30, 2020, CT continues to misrepresent genetic science and the Scriptures.]

* Christianity Today Denies that God Made Adam from the Dust of the Earth: Real Science Radio hosts Fred Williams and Bob Enyart rebut the cover story, The Search for the Historical Adam, revealing the science and Scripture that Christianity Today choose not to include. CT omitted the many discoveries published by evolutionists in refereed scientific journals that support the Genesis account of the special creation of Adam and Eve in the recent past. Rather than their "Search for" title, Christianity Today would have been more forthright to run their cover story as, "We Deny the Existence of Adam." The magazine, founded by Billy Graham, also failed to warn readers that the liberal churches that affirm abortion and homosexuality, and that even deny the resurrection of Jesus Christ, all began their moral and spiritual downward slide by denying the historicity of the foundational book of Genesis. Christianity Today is following in their footsteps with their claim that God put a human soul into animals that had evolved from ape-like creatures.

* Christianity Today's Missing Science: Highlighted out of RSR's List of Evidence for the Global Flood and our List of Genomes that Just Don't Fit, Bob and Fred present discoveries that Christianity Today happened to leave out of their article including:
- a 6,000-year old Mitochondrial Eve calculated using exclusively human genetic data
- a Y-chromosomal Adam is the recent man whom every man alive descended from
- Haldane's Dilemma on the far-too-slow rate at which tens of millions of hominid mutations can propagate species-wide
- the enormous dissimilarity of chimps and humans
- now sponges genes are 70% the same as human genes
- and the newly-compared and 30% "horrendously" different chimp Y-chromosome
Actual measured mutation rates, in fact, as reported by Ann Gibbons in Science magazine indicate that, if these rates have been constant, "mitochondrial Eve… would be a mere 6000 years old." See additional scientific observations on the genetic information about mankind descending from Adam and Eve and with the bottleneck in Noah's family in Bob's article, Why Was Canaan Cursed? 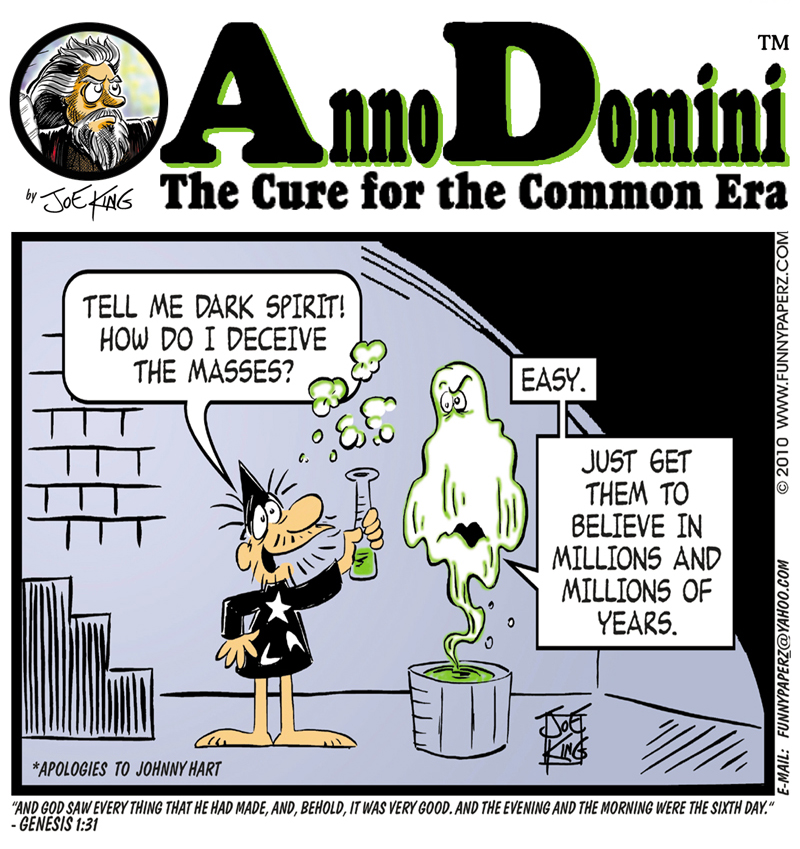 * Christianity Today's Missing Scripture: As for the Scriptural implications of Christianity Today's old-earth allegation and denial of Adam's existence, Bob and Fred point out that Moses, Paul, and Jesus all referred to Adam as a literal person (which CT now denies) and the creation account is presented as historical, with Jesus reminding people that "from the beginning of the creation [not after billions of years], God made them male and female," (Mark 10:6). Today Real Science Radio explains something that CT left out of their article. Those who reject a young earth, also:
- reject the biblical teaching of no death before Adam
- reject the six literal days of creation
- reject that no thorns existed before the Fall
- reject the long lifespans of mankind's patriarchs

- reject the global flood (and the evidence for it)
- reject the origin of languages at Babel
- reject that the Earth was divided in the days of Peleg
- reject that there would have been painless childbirth
- reject that God made man from the dust of the ground
- reject the "order" of the days of creation (stars before Day 4; birds after land animals of Day 6; ), and
- by those who also claiming that "Adam" may have been an incorporation of thousands of individuals even undermine the New Testament genealogy of Jesus Christ.

ADDITIONALLY: Although more difficult to establish, old-earth professors at Christian colleges also reject many other biblical teachings, including the following list. 2014 Update: A Denver Bible Church college student (let's call him Josh) just graduated from a well-respected Christian college said that his "conservative" alma mater, like most religious colleges and like Christianity Today, believes in an old earth. Josh said that regarding the typical Christian college professor of Old Testament or science, because they reject the young earth teaching of Genesis, there are many historical events reported in the Bible that they never affirm in their publications nor in their classrooms. For example, typical old-earth Christian college professors also:
- reject the Exodus (rsr.org/exodus#chris-heard)
- reject the fall of Jericho (even against powerful archaeological confirmation as at rsr.org/jericho)
- reject the historicity even of Joshua's battles
- reject the ancestry of Abraham through Shem and Noah, to Adam
- reject the book of Jonah, and
- reject many other events that the Bible presents not as parables or symbols but as actual history. And as the foundation goes, so goes the temple of the house of God, and eventually "Christian" graduates and future ministers begin to see even the resurrection of Christ as a metaphor.

* New Testament Flood References: Consider also that the New Testament presents Noah's Flood as an historical event.
- Jesus, Peter, and Hebrews all mention Noah by name with Peter reminding us that only "eight people" survived the flood
- God "did not spare the ancient world, but saved Noah, one of eight people, a preacher of righteousness, bringing in the flood on the world of the ungodly" (2 Peter 2:5)
- "the Divine longsuffering waited in the days of Noah, while the ark was being prepared, in which a few, that is, eight souls, were saved through water" (1 Peter 3:20)
- [Ahead of the uniformitarianism of Charles Lyell & Charles Darwin] Peter warned about the claim that "all things continue as they were from the beginning of creation. For this they willfully forget... the world that then existed perished, being flooded with water" (2 Peter 3:4-6)
- "Noah, being divinely warned of things not yet seen, moved with godly fear, prepared an ark for the saving of his household," (Hebrews 11:7)
- Jesus Himself described the world "before the flood," with the majority ignoring God, "until the day that Noah entered the ark, and... the flood came and took them all away" (Mat. 24:38-39)
- Luke also records Jesus stating that "Noah entered the ark... the flood came and destroyed them all" (Luke 17:27)

Genesis Flood References: The first book of Moses explicitly describes a global flood which drowned all but eight humans, covered the tops of the mountains, required the building of a massive ark to save a breeding pair of all birds (unnecessary in a local flood) and every kind of land animal; Moses uses the word "all" many times for all the mountains under heaven covered, all flesh died, all living things were destroyed from the earth, etc. with the Genesis 6 - 8 flood account providing dozens of instances emphasizing the flood's global and comprehensive extent. Further, God promised to never flood the world again (Gen. 9:15), a broken promise if Noah's flood was local.

* New Testament References to Genesis: As pointed out by Henry Morris in The Remarkable Birth of Planet Earth, every New Testament author refers to at least one of the first eleven chapters and Jesus Christ Himself referred to each of the first seven chapters of the book of Genesis. We expect to list those here sometime in 2021.

* Additional Old Testament Flood References: A complete list of Old Tetament flood references is planned for 2021, as an addendum to our List of All Bible Verses Mentioning Creation. Creation, by the way, is mentioned in twenty six books of the Bible, in 66 chapters and 208 verses, and as discussed at rsr.org/passages#flood-allusions, interestingly, ten creation passges make allusions to the global flood!

* God Exists; Secular Theories of Origins Do Not: As filmed on the Pepperdine Campus...

* On the Day-Age and Gap Theories: See rsr.org/gap-theory.

Today’s Resource:  You'll just love the science DVDs, books, and written, audio and video debates offered by Real Science Radio! So you're invited to browse through our Science Department in the KGOV Store or to call us at 1-800-8Enyart (836-9278).