* Real Science Radio Sorts Out the Fossils: RSR co-hosts Fred Williams, with Creation Research Society, and Bob Enyart, have a fun time on this episode of Real Science Radio presenting more articles from the Summer 2010 issue of Creation magazine including about:
- Fossils squeezing evolutionary history with vertebrates now showing up in the Cambrian explosion!
- Sharks and land plants are pushed back 25 million years; arthropods 40 million, and winged insects 80 million years back!
- Cells with a nucleus now show up a billion years early than previously believed. 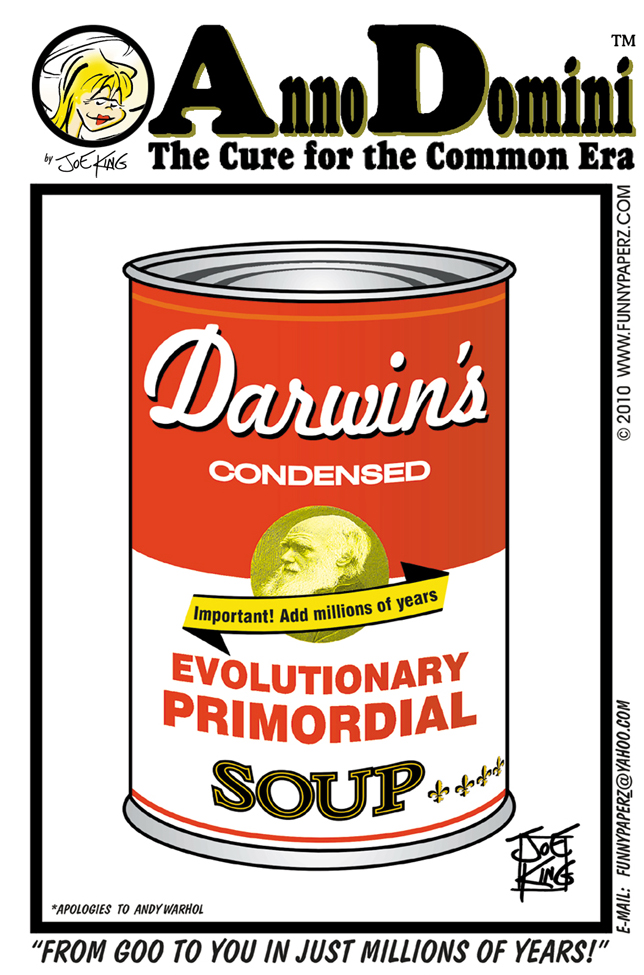 * Post-show update: The earlier evolutionists claim that life began on Earth, the more trouble they have with astrophysicists. Why? They claim that a few billion years ago the Sun would have been far more unstable and cooler. It would shoot out radioactive waves many of which being violent enough to blow out Earth's atmosphere into space, leaving Earth dead and dry like Mars without an atmosphere. And ignoring the fact that powerful computer simulators cannot validate the nebula theory of star formation, if the Sun had formed from a condensing gas cloud, a billion years later it still would have been emitting far less energy, even 30% less, than it does today. Forget about the claimed one-degree increase in the planet's temperature from man-made global warming, back when Darwin imagined life arose, by his just-so story of life spontaneously generating in a warm pond somewhere, the Earth would have been an ice ball, with an average temperature of four degrees Fahrenheit below freezing! See also The Young Sun DVD.

* More Fun RSR Topics on Today's Show:
- Lobster eyes inspire U.S. engineers who invented a security camera that sees through concrete walls!
- Scientists add bacteria to sand to get marble-like rock, not in eons but in days (see our List of Not So Old Things)!
- Tiktaalik, the fish formerly known as the ancestor of four-legged land animals, has been detroned by Poland's tetrapod footprints, which trackways are dated (in the evolutionary timeframe) as 18M years before said fish!
- Olympic swimsuits mimic shark skin scales since all those tiny surfaces reduce drag far more than smooth skin would.
- Big Bang scientists admit sun is spinning too slowly, it's equator and planets' orbits are not lined up, planets, moons, and comets rotate or even orbit backwards, computer simulations don't show rocky planets forming by rocks smashing into each other nor can they explain how the gas giants formed far from the sun. Other than that, the nebular hypothesis theory has some real problems.

* Wet Sand Hardens into Stone in Hours: According to scientists at Murdoch University, experiments prove that rocks don't need eons to harden but by adding soil bacteria to "soft sand," in a couple of hours they end up with "something resembling marble more than sandstone." See below, Science Alert, and Creation Magazine, September 2010.

From a Murdoch University thesis on the topic:

"It was shown that high cementation strength was produced at low urea hydrolysis rates and that the development of cementation strength was not linear over the course of the reaction but mostly occurred in the first few hours of the reaction. In addition, the whole cell bacterial enzyme had capacity to be immobilised in the cementation material and re-used to subsequent applications... An industry-sponsored trial was undertaken to investigate the effectiveness of Biocement for increasing in-situ strength and stiffness of two different sandy soils; (a) Koolschijn sand and (b) 90% Koolschijn sand mixed with 10% peat (Holland Veen). After biocementation treatment, Koolschijn sand indicated a shear strength of 1.8 MPa and a stiffness of 250 MPa, which represents an 8-fold and 3-fold respective improvement in strength compared to unconsolidated sand."

From Murdoch University's School of Biological Sciences and Biotechnology...

* Biocement: In collaboration with Calcite Pty Ltd, Dr Cord Ruwisch has developed a novel method of forming calcium carbonate (calcite) using soil based bacteria. This technology, known as “biocement” can "set" sand into a solid rock-type material without the need to remove the sand from its location. It is expected that this process will be of interest to the mining industry, restoration of buildings and monuments. The process is similar to naturally occurring formation of calcite (limestone), however with the use of selected microbes, media and growth conditions the process can be controlled to achieve desired strengths...

* KGOV's Annual September Telethon: We NEED YOU to help us stay online for another year! Our goal is 200 people to pledge $20 a month (or current friends of BEL to increase their giving by $20)! Please HELP! Call 800-8Enyart or you can give online! So far: 11 of 200. Thank you guys! And for the rest of you, really, please help!

* Join a Weekly Literature Drop! with Bob Enyart or with another pro-life leader, or arrange a weekly lit drop in your own town ! See the details!

* Special Editions of Real Science Radio:
- BEL's famous List of Not-So-Old Things
- Bob's debate with Christian Darwinist British author James Hannam
- PZ Myers blogs against Real Science Radio so Bob hits back with the Trochlea Challenge
- Waiting for Darwin's Other Shoe: Evolution mag's cover story Darwin Was Wrong on the Tree of Life
- Microbiologist in Studio: Bob talks with the Creation Research Society Quarterly editor about new genetic findings
- Caterpillar Kills Atheism: describe how a bug could evolve to liquefy itself and then build itself into a flying creature
- And see RSR Offer of $2,000 to get 16 letters of the alphabet in their correct places; $500 pd in 1998; $1,500 in 2010!

* For our RSR Friends: in case you miss other BEL programs, here are some of the atheists Bob Enyart has debated:
- ABC's Reginald Finley, called The Infidel Guy, from ABC's Wife Swap program; 3-26-07;
- TheologyOnline's psychologist Zakath in a 10-round moderated written online debate, also available in soft cover;
- TOL's member who calls himself Fool; 3-28-06;
- John Henderson who wrote the book God.com 6-15-2006;
- Carlos Morales, Fox News, Huffington Post, etc. reports on U of Texas atheists Bible-turn in program, president of Atheist Agenda 7-14-10
- Freedom from Religion Foundation's Dan Barker (put the atheist sign near the Nativity at the capitol in Seattle) who was involved with the ministry of Kathryn Kuhlman, one of a group of so-called faith healers. (See a BEL listener who initially compared Bob to Benny Hinn until...) The BEL show was on 12-11-08;
- Michael Shermer, an editor with Scientific American and the Skeptic Society who in in this famous 73-second excerpt on BEL denied that the sun is a light, illustrating that it's tough debating atheists when they're hesitant to admit to even the most obvious common ground. 8-28-03

* Today’s Resource: Have you browsed through our Science Department in the KGOV Store? Check out especially Walt Brown’s In the Beginning and Bob’s interviews with this great scientist in Walt Brown Week! You’ll also love Dr. Guillermo Gonzalez’ Privileged Planet (clip), and Illustra Media’s Unlocking the Mystery of Life (clip)! You can consider our BEL Science Pack; Bob Enyart’s Age of the Earth Debate; Bob's debate about Junk DNA with famous evolutionist Dr. Eugenie Scott; and the superb kids' radio programming, Jonathan Park: The Adventure Begins! And Bob strongly recommends that you subscribe to CMI’s tremendous Creation magazine!

* Visit the Amendment 62 Booth at the Colorado State Fair: From Aug. 27th through Mon. Sept. 6th, in Pueblo at the Colorado State Fair, you'll be able to help out Dee Waite and the Colorado RTL and Personhood Colorado volunteers at the campaign's booth on the first floor of the Agriculture Palace. Of course you can just drop by and say hello, or drop by and help out in the booth, but even better, please let Donna at the CRTL office know that you're going to visit and perhaps she can help schedule you for a shift, anytime from 10 a.m. to 11 p.m. throughout the eleven days of the fair!