Between the Covers: What's Inside a Children's Book with Deborah DeGroff 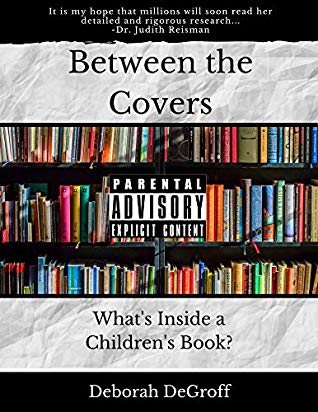 A longtime BEL hero, research professor Dr. Judith Reisman, highly recommends the work of fellow researcher Debbie DeGroff. Bob Enyart, of Denver Bible Church, interviews DeGroff on her stunning work, Between the Covers: What's Inside a Children's Book. (Get the Kindle version at Amazon or the print version at whatsinsidechildrensbooks.com.) More than a decade ago during a marriage counseling session a husband told Pastor Bob that his wife did not share the intensity of his vigilance to protect their children from pornography. So, for the only time in his life ever doing something like this, Bob asked this woman to leave the office, then on her phone search for "porn", and then return two minutes later. She reappeared, white like a ghost, horrified, and since then their children have grown and the husband had an equal partner in vigilance protecting their kids from exposure to pornography. DeGroff's book is like that. You might know of the harm in children's books but you might not have been jolted sufficiently for an entire lifetime of not lowering your guard so that you can help to protect the children and grandchildren in your sphere of influence. Please consider getting Debbie's book and perhaps lend it to a friend or two. To generalize across the board from the mainstream titles and publishers, kids books are severely dumbed down from a century ago, they mock Christians and praise Muslims, they are filled with profanity, are sexually explicit, and the "teens books" (written at third to fifth grade levels and read by very young children) present sexual violence and perversion as graphic as any hard core "adult" material. And the children's book imprints of the Simon and Schusters of the world are only more than happy to get these into your kids bedrooms or onto their phones. Beware!

Today's Resource: Between the Covers- What's Inside a Children's Book?

The subject of Children’s Literature affects everyone. It includes the issue of literacy. Once one is truly literate, what one reads makes a huge difference. We are told that reading books about being kind or about not being a bully will help us to be kind and not be a bully. However, the numerous books condoning every vice known to man are supposed to leave the children unscathed.
No one would argue that the ideals that made this country great have been eroded. Individualism and patriotism have become the unpardonable sins.
If God is mentioned at all in these books, He has become a she who is inside everyone and everything, connecting the divinity in us all.
These ideas came from somewhere. Perhaps we need to start looking BETWEEN THE COVERS.