*Tippecanoe and Tejas Too: Host Fred  Williams and special guest Doug McBurney review the latest Hydroplate Theory “Hit Piece” from Edward Isaacs titled "Pre-Tejas volcanism in North America: challenge to Hydroplate Theory" via the Journal of Creation (#36). Find out where the author's assertions regarding volcanism in geologic mega sequences hit, where they miss, and why Fred says the Journal might even consider retracting it!

Isaacs primarily relies on work by Dr Tim Clarey, a geologist with ICR and fervent supporter of CPT. Clarey has focused his work developing what are called Sedimentary Megasequences. These sequences are massive groupings of sedimentary layers that were laid down at a specific interval and delineated by erosional boundaries. That is, they can be recognized by their bounding erosional surfaces and also sudden change in the rock type. Because these megasequences are not reliant on fossils and their supposed dates, they have become the preferred method for studying the sedimentary deposits of the flood.

Perhaps the biggest problem with Isaacs paper is his obvious assumption that megasequences are pristine and unyielding. Isaacs claims that since the Hydroplate theory postulates that volcanism began with the sliding of the plates that culminated with the compression event, it therefore cannot allow for volcanics in the pre-Tejas sequences, they must be quote "non-existent". However, other creation scientists caution against such strict adherence to megasequences. John K. Reed, a PhD geologist with CRS, wrote “Since depositional environments would have been determined in part by water depth and geologic energy, topographic variation would have created differences in geological conditions (e.g. depositional, erosional, or static), based on floodwater position, not time.” [Toppling the Timescale, Part II: Unearthing the cornerstone, Creation Research Society Quarterly 44:256–263, 2008].

Dr Laurence Sloss, the secular science guy who came up with megasequences said this, “Sequences should be considered as rock units, assemblages of formations and groups. They are simply the strata which are included between objective, recognizable horizons, and are without specific time significance since their limits do not coincide with time lines and may include rocks of different ages in various areas.”.

Isaac's logic has further problems. In Dr Clarey’s book ‘Carved In Stone’, he associates the Zuni megasequence, the one just before and below the Tejas, with CPT’s continental drift phase (pg 187). Clarey mentions CPT’s continental drift possibly starting as early as day 100 and up to day 150. HPT postulates the slide day 150! Apparently volcanism when CPT’s continental drift or all out runaway subduction phase starts is ok, but it’s not ok when the hydroplates begin to slide? When you look at the amount of volcanics associated with these last two sedimentary sequences, they fit nicely with HPT if you remove logical fallacies. See the charts of below to get an idea of volcanics for the last two sequences (via 2018 ICC paper). 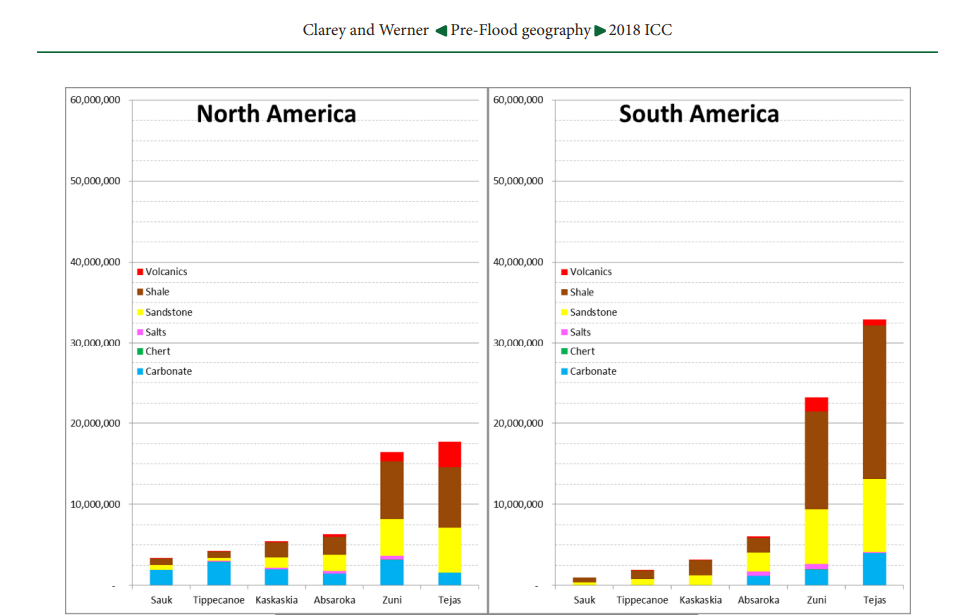