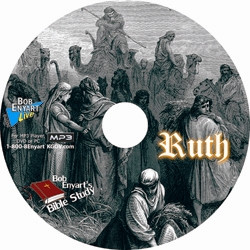 * Ruth: "Now it came to pass, in the days when the judges ruled," that the world gained its oldest book of romance. Ruth's love story tells the world's love story. Ruth became King David's great-grandmother. And since Ruth is not a Jewish woman, but a Moabitess, her inclusion in Christ's genealogy (Mat. 1:5) raises interesting questions. Further, Ruth's mother-in-law, Rahab, had been a Canaanite prostitute. Skeptics dismiss the Bible as exclusionary and unforgiving. But students know the truth. The marriage proposal in this book, from a well-established Jewish man to a widowed Moabite woman, symbolizes God reaching out to fallen man. Boaz, a type of Christ, symbolizes Christ's role as man's redeemer. The Kinsman Redeemer perpetuates the name of the dead, raising up life where there was only death, an inheritance where there was none.
Available on MP3-CD or download.

* Denver Post's Shelley Bradbury: In her report, Can a baby be abused in the womb?, a question not unlike, Can a Hispanic be a racist?, which shouldn't have to be asked, Bradbury quotes a CRTL spokesman...

Coincidentally, Reuters news agency on Jan. 30, 2020 reported, "Morphine is routinely stocked at neonatal departments to treat the withdrawal symptoms of babies born to mothers who are addicted."