How To Turn Perfectly Good Scripture into Bad Predictions

For the 70th anniversary of the modern State of Israel, Bob Enyart reviews what we've covered this week.
- The prophecy (about Jerusalem and Israel)
- 4,000 years of Jewish ethnic identity (preserved by circumcision and the Mosaic ordinances)
- Christian anti-Semitism (as explained at kgov.com/luther)
- Christians who love the Jews to hell (by saying they can be saved by Moses apart from trusting Christ)
- America's embassy move to Jerusalem (to save the Palestinians from their delusion that Israel isn't a legitimate state
- The leading End Times preachers all dying of old age (something they would never have expected)
- Christ’s Second Coming has always been imminent (as even the Apostles believed)
- God is free (so Peter said we can "hasten" the coming of the Lord and Jesus said those days could be "shortened".

* Calculating of Dates: Here's an example of the never-ending, and so far, universally incorrect, calculating of end times dates by a Christian author, and then another example by the leader of the Jehovah's Witnesses... 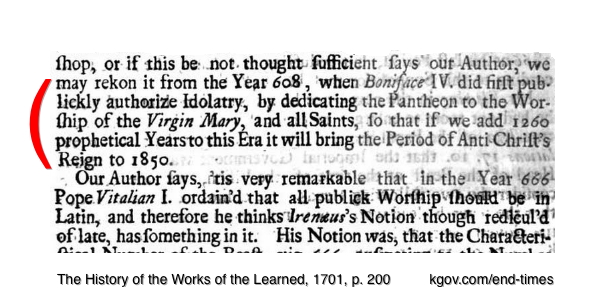 * Remember When: Christians were told that the following dates were significant because they represented end-times markers. Of course the Lord will return one day, and hopefully, soon. But confused teachers using events and dates like these confused others.

- 1850 for the ascent of the Anti-Christ (calculated by London's protestant scholar Robert Fleming, V.D.M in 1701 by adding to 608 A.D. the "1260 days" of Revelation, converting each day to a year
- 1948 the nation of Israel is reconstituted in the Middle East
- 1957 European Common Market (ECM) established with six nations
- 1973 The ECM added three more nations, prophecy teachers added this up to Daniel's "ten toes"
- 1980 In the decade of the 80s, three more nations joined the ECM, still adding up to Daniel's ten toes
- 1993 The European Union (EU) was formed with 12 nations
- 1995 Ten Nation European Alliance (WEU) formed, claimed to be Daniel's 10-toed prophecy
- 2001 Islamic terrorist attack on America, claimed to represent the end times
- 2010 Ten Nation European WEU decides to disband claimed as major fulfillment of prophecy
- 2011 Ten Nation WEU officially disbands and absorbed into the EU
- 2016 The now 28-nation EU begins to unravel with the UK's Brexit and Italy's no-confidence vote

* Last Days vs. Last Minutes: When the events listed above occurred, popular prophecy teachers claimed they represented end times prophecies. Well, it's been a long time since these events occurred. The "end times" is a lot longer than any of them would have predicted. As we say at Denver Bible Chruch to those misinterpreting last-days prophecies, "From now only, will you only tell us about last-minute prophecies?" Afterall, the most famous end-times teachers are all dying of old age and these last-days interpretations have been hanging around for more than half a century.

What We Believe and Why We Believe It: Do you know anyone who does not believe in Christs resurrection? What a fantastic witnessing tool we have in this Mount Moriah video! Bob brings secular resources to bear on the question of the resurrection of Jesus. Non-Christians can write a letter requesting a free copy of this video (non-Christians only: mail your request to Bob Enyart, PO Box 583, Arvada CO 80001). If you are already a Christian, youll be thrilled when you learn about all the evidence that exists which supports the resurrection, from prophecies to history, to archaeology, to details of the city, the geography, the skull, the garden, and the tomb.

This entertaining video will show you:

Now available in streaming video rental for $5 for a month.