Bob walks down memory lane and then over some serious obstacles talking about his own past, National Geographic’s decades of open racism, sexism, and bigotry, and then to the life-destroying consequences of their godlessness and sexual immorality, as that crumbled foundation continues to bring down the house. Bob also talks about a few events from his pre-conversion Catholic past and his early years as a born-again Christian, about his attending the Jesus Rallies of the 1970s and his interactions with Promise Keepers.

Example of Nat'l Geo Bigotry: The example that Bob alluded to on today's program, of of National Geographic’s anti-Christian bigotry, is documented over at rsr.org/camels, where you'll see...

* National Geographic, not Bible, Wrong on Camels: :) You just can't make this stuff up... 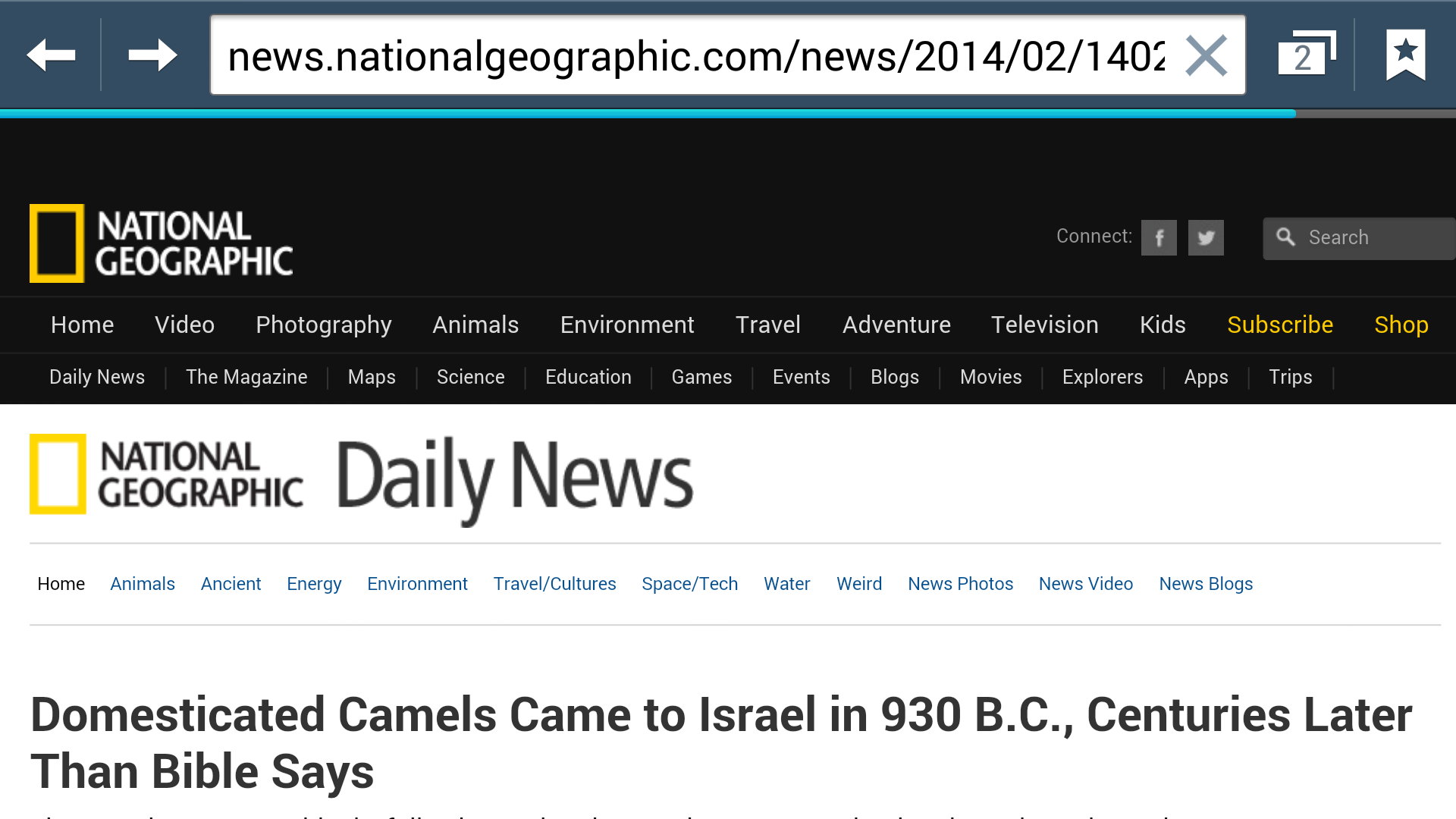 * Extensive Evidence of Camels in Abraham's Day: Genesis is proved right again. Too bad National Geographic didn't first talk to archaeologist Dr. Titus Kennedy (who we learned about through the Associates for Biblical Research). If the Nat'l Geographic editors had, they would not have published their overtly false article last month claiming that Abraham could not have had domesticated animals as recorded in Genesis. Ha! There's loads of documentation of camel domestication from the ancient world, even many centuries prior to the time of Abraham!

* An Excerpt from Dr. Kennedy's Paper: The godless are willing to twist every fact in their attempt to discredit the Bible. To make their indefensible claim that the Bible is wrong to describe the domestication of camels in the time of the patriarchs, Dr. Kennedy points out that:

...archaeological and textual evidence must be either ignored or explained away. Bones, hairs, wall paintings, models, inscriptions, seals, documents, statues, and stelae from numerous archaeological sites all suggest the camel in use as a domestic animal in the ancient Near East as early as the 3rd millennium BC, and certainly by the Middle Bronze Age.

* Monica Lewinsky/Madonna Wannabe Nina Burleigh: Post-show Update. Pervert, liberal journalist, and child-dismemberment celebrator Nina Burleigh interviewed Bob Enyart regarding abortion for a Newsweek cover story. ("Any politician willing to kill a single person is disqualified.") During their discussion Bob told Nina about the National Geographic camel fiasco. Then Enyart pointed out to Burleigh, who has written about bias in biblical archaeology, that she was so right to point out that opposition to the Bible could blind archaeologists to the evidence. Of course she emphasizes the contrary point, but did admit its reciprocal.

Phew. Fred and Bob were worn out just reading about Dr. Kennedy's accomplishments!

* Related: See Dr. Clyde Billington's article on The Nazareth Inscription from the time of Roman Emperor Claudius' reign (41-54 A.D) warns anyone who "has in any manner extracted those who have been buried, or... moved sepulcher-sealing stones" that he may "suffer capital punishment under the title of tomb-breaker."

* The Bible Gets Easier to Understand:  Apparent contradictions plague many Bible students. Therefore in his life's work, The Plot, Bob Enyart set out to demonstrate how hundreds of such contradictions disappear when the reader applies the big picture of the Bible to its details. Tunnel vision focuses so narrowly on a problem that the solution often lies just out of view. As the pastor of Denver Bible Church, Bob Enyart teaches Christians how to use the whole counsel of God to understand the plot of the Bible and solve biblical mysteries. As with all of our BEL resources, The Plot comes with a 30-day money-back guarantee! And as we become proficient in the big picture, that is, the overview of the story of the Bible, then countless details, including as one small example, about the cities of refuge, become increasingly clear!

Today's Resource: Get both volumes, I & II, of  Bob Enyart's verse-by-verse study of The Book of Joshua, for a discounted price. And you can enjoy these or any of Bob's studies, made available by book title or by topic, or you can subscribe or donate online or by calling 1-800-8Enyart (303-463-7789).

Now you can hear Real Science Radio on your
phone or iPad with the SoundCloud app!