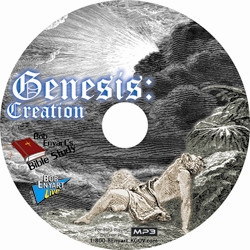 * Genesis Creation: A rock cannot make itself and a fire cannot burn forever. Matter cannot come from non-matter by itself and a perpetual motion machine cannot exist. Therefore, the universe could not have made itself from nothing, nor could it have always been moving, churning, working, and burning. Another way to state these first two laws of thermodynamics is that the physical universe must have had a supernatural Creator sometime in the recent past. This study presents the scientifically compelling Genesis story. Of all men, Christians more than any are able to weave the latest findings into our understanding of the fabric of the universe. Since God created the physical universe, good science reveals God. And while some say that you cannot prove the existence of God, the Bible tells us that the clear evidence of His personal, powerful, and eternal existence is manifest through the creation!  Enjoy these studies!

* Friday Note -- If You're in Denver: Come out and meet Dr. Jerry Bergman tomorrow night, August 11th, at the Rocky Mountain Creation Fellowship at 7 p.m. at Calvary Apostolic Church, 5900 E. Yale Ave, Denver, just a few blocks east of I-25 and Yale.

* Now Journal Nature Agrees with Genesis 1:2: A paper in May 2017 in the journal Nature Geoscience argues, as New Scientist put it, the "Early Earth was covered in a global ocean and had no mountains". Even a broken clock is right twice a day. They're trying, ya gotta give 'em that. These atheistic publications got the conclusion correct but by the wrong means. Yes, until Day Two, the Earth was covered by water, until God made the raqia, that is, the firmament (terra firma) which is the Earth's crust.