The "Link" to Terror is the "Justification"

No Link? ... No Link?? Do They Even Know What a Link Is? When governments and the media wrongly claim that a particular Muslim mass murderer has no "link" to Islamic terror, realize that the only relevant "tie" to terrorism is the alleged "justification" used to commit an atrocity. A Muslim murderer shouting "Allahu Akbar" is by definition connected to Islamic terror. Also on today’s show, Bob discusses the DNC email hack meltdown, which couldn’t have happened to a nicer group of people. And finally there’s the most important thing that happened at last week’s RNC, that many conservatives are apparently blind to. 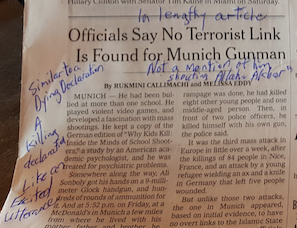 * The Media Says that Islam is Tolerant: "If Islam is a religion of tolerance, then how many synagogues are in Mecca, a 500-square-mile city of a million people? None. And how many churches are in the entire country of Saudi Arabia? None. Islam is the religion of intolerance. (Meanwhile, there is the Great Synagogue of Rome and the Mosque of Rome.)" -Bob Enyart, kgov.com/terrorism

* Obama Says Islam is a Peaceful Religion: "Iran and Saudi Arabia, two countries with Islamic governments, call for the death penalty for a Muslim who converts to Christianity or just renounces Islam. When someone says Islam is a religion of peace, just ask, 'Where?'" -Bob Enyart, kgov.com/terrorism

* The Primary Victims of Islamic Terrorism: "As for the many followers of the Koran being slaughtered daily by Islamic terrorists, the world will have to wait until Barack Obama is out of office before America's full might will be used to save these Muslims." -Bob Enyart, kgov.com/terrorism  [about 30,000 lethal jihad attacks since 9/11] 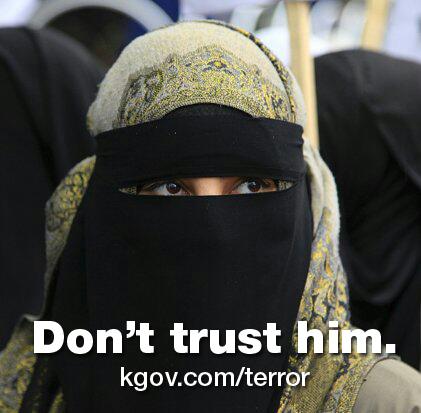 * Saudi Arabia, the Hajj, and Terrorism: "If Islam opposes terrorism, then Saudi Arabia should announce that no one supportive of ISIS, Al Qaeda, or any terrorist group or action, is welcome in Mecca to make Hajj." -Bob Enyart, kgov.com/hajj

* The "Link" to Terror is the "Justification": When governments and the media wrongly claim that a particular Muslim mass murderer has no "link" to Islamic terror (see below the Ali Sonbali example at kgov.com/terror#allahu-akbar), realize that the only relevant "connection" to terrorism is the alleged "justification" used to commit an atrocity. A Muslim murderer shouting "Allahu Akbar" is by definition connected to Islamic terror.

* Terrorism is crime committed by an individual or group to influence public policy. Other perfectly good words exist to describe heinous acts, like murder, arson, genocide, unjust war, mass murder, war crimes, etc. Terrorism is not workplace violence, unjust domestic or foreign war waged by nations, a family murder-suicide, nor revenge against a boss or a school, regardless of the weapons used, the amount of terror inflicted, or the number of victims. Such unjust and criminal behavior terrorizes people, but only with the aim of influencing public policy does such behavior qualify as terrorism.

Today's Resource: Have you seen the Government Department at our KGOV Store? Check out especially Bob's classic God's Criminal Justice System seminar, and our popular DVDs  God and the Death Penalty,  and Live from Las Vegas. We are also featuring our groundbreaking powerhouse Focus on the Strategy DVD documentary exposing the 30-year failure of the pro-life movement and laying out a strategy for actually ending the war against children.