Right and Wrong: This week Bob presents a message from chapter two of his study of 1 Peter. How do we keep ourselves in spiritual shape to clearly understand what is right and what is wrong? 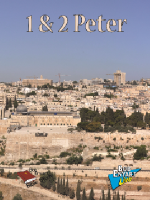 Meet the Apostle Peter in this important Bible study. Have you considered why Peter addresses his letters to no well-known recipients? Rather, similarly to James, John, and Jude, he sends them generically to the circumcision believers scattered abroad. Why? Meanwhile, Peter mentions the Apostle Paul, who addresses his epistles to many well-known leaders and specific regional churches. Teacher Bob Enyart demonstrates that understanding the big picture of the Bible, its plot, helps to see even such small books as First Peter and Second Peter in their proper perspectives. Such biblical observations go a long way toward explaining the differences between Peter and Paul. For as Peter himself wrote of, "our beloved brother Paul" who "has written to you as also in all his epistles? in which are some things hard to understand?"

Available in DVD or MP3