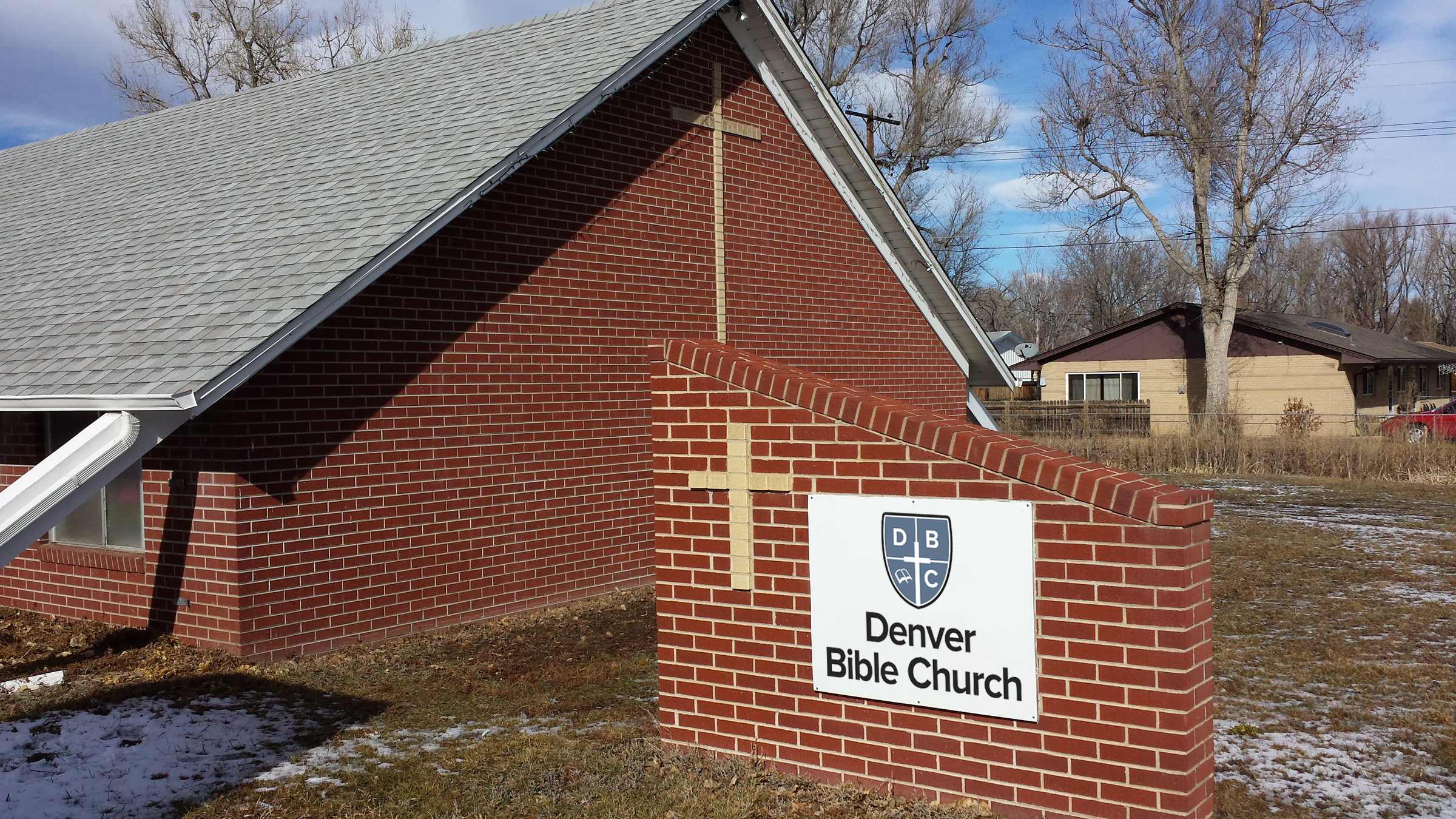 * Homosexual Marriage Update: DBC Announcement: Dear loved ones, with the horrific supreme court ruling attempting to force homosexual marriage on the entire country (the way they forced child killing on the country with Roe v. Wade), we will have an emergency showing on Sunday morning at 9:30 a.m. at Denver Bible Church of Ray Comfort's film Audacity. Part documentary, part movie, Audacity will teach millions what the Bible actually says about homosexuality. And for the worship service, which begins at 10:50 a.m., the sermon of course, and tragically, will be on how to protect our families from the wickedness flooding our land. And if you can, please publish this notice on your social media.

Denver Bible Church rejects the court’s immoral and perverse opinion on homosexual marriage. The creator Jesus Christ said that God made us “male and female at the beginning of creation” and God instituted marriage between a man and a woman. All governing officials at every level of government should reject and ignore any and every attempt, whether legislative, by popular vote, or judicial, to redefine marriage. Likewise, all governing officials should reject Roe v. Wade and any and all other attempts to repeal God’s enduring command, Thou shall not murder.

Grieving, yes, but with ultimate victory in Jesus Christ!

We Just Want To Be Left Alone: Right. "In the public square, Christianity and homosexuality are mutually exclusive. One or the other will be in the closet", said Bob Enyart. A homosexual replies: "No really, we just want to be left alone. Oh yeah, and you better bake us a cake. Or else. Or a pizza pie. And cookies. And send us flowers. And you better give me a haircut while I'm waiting. And take some photos. Or else. And forget your heterosexual student clubs and dating services, and as for your teachings on morality, we've decided to ban them. Oh yeah, and did we tell you? You're going to print us some t-shirts and then host our wedding! Yup. Even on your church property. And we want a parade, and you're going to provide security too." See more. Unfortunately.


Now, for the conclusion of Whale Month on RSR 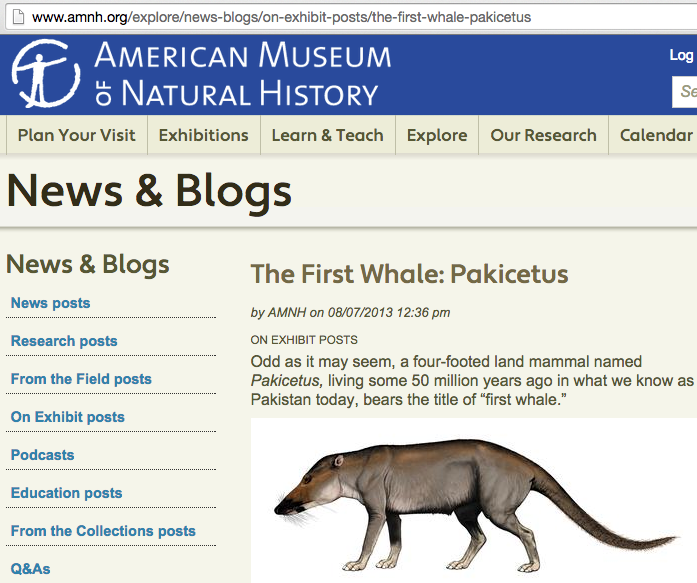 * The Canonical Whale Evolution Story Falling Apart: Real Science Radio host Bob Enyart concludes this comprehensive series of interviews with filmmaker Carl Werner whose videotaped interviews with the discoverers of the "walking whales" have caused museums around the world to change their fossil exhibits. Dr. Werner reports on one of the most fascinating chapters in the history of science. For the imagined whale-like features of creatures like Pakicetus, Ambulocetus, and Rodhocetus, one by one, are being falsified and their "whale features" are being withdrawn by "whale evolution experts" and even by the discoverers themselves, the teacher Philip Gingerich and his former student Hans Thewissen.

* Sending Werner's Work to the Experts: RSR would like to mail a copy of Dr. Werner's Evolution book and the companion video to Dr. Gingerich and Dr. Thewissen (and perhaps to the other whale experts referenced therein). If you would like to underwrite that task for $100 per expert (to pay for the materials, shipping, our researcher's time, follow-up, etc.), please call 800-8Enyart or consider donating online! Thank you!

* Filmmaker's Bombshell Report -- Forged Whale Fossils: Dr. Werner interviewed the scientists who supplied the primary whale evolution "fossils" to the world's leading museums including the Smithsonian, Carnegie, American Museum of Natural History, NHM of London, NMNS of Tokyo, Melbourne Museum, Canadian Museum of Nature, and the NHM of Paris. Gingerich now admits that Rodhocetus had no flippers and no fluked tail (and certainly no blowhole), so what millions of evolutionists believe regarding whale fossils is based on fabricated, and fully falsified, misinformation. Hear it, read the full press release, and see it for yourself below (rather than accepting the widespread Darwinist misinformation like about Rodhocetus from princeton.edu).

* Today’s Resource: You'll just love Carl Werner's  Evolution: The Grand Experiment DVD and his Living Fossils DVD! Want something else? Just browse the Science Department in the KGOV store for the best of the best in creation books, debates, and videos, or just call us at 1-800-8Enyart (836-9278).

* RSR's List of Whale Evolution Problems: In the tradition of the beloved RSR List Shows, we hope the following information will be helpful to you. Throughout the month of June, we will be adding items to this list and Bob Enyart asks you to help us turn this into a comprehensive and succinct resource, so please don't hesitate to email Bob@rsr.org your suggestions for what should be included here:
- Ten thousand paleontologists over 150 years have failed to discover whale transitions
- Two guys in a few decades discovered Ambulocetus, Rodhocetus, Pakicetus, Sinonyx and more  (see below)
- The teacher Dr. Philip Gingerich became famous for discovering Rodhocetus, Pakicetus, and other whale transitions
- The student Dr. Hans Thewissen became famous for discovering Ambulocetus
- Without limb or tail bones to justify his imagination, Gingerich drew flippers and a fluked tail onto Rodhocetus
- Gingerich admits on film to Dr. Carl Werner that additional fossils show Rodhocetus had four legs
- Gingerich admits that there is no evidence that Rodhocetus, a good runner, had a fluked tail
- Major museums begin to pull the famed Rodhocetus from their whale evolution displays
- Werner-aware articles like at Wikipedia either omit Rodhocetus or downgrade it to just one of the Protocetids
- Smaller-staffed sites like Francis Collins's BioLogos continue to showcase the completely misconstrued Rodhocetus
- Gingerich reconstructed a Pakicetus skull from fragments but now admits there was no indication of a blowhole
- After more bones were excavated, Pakicetus became a land animal but still kept its place as a whale transitional form
- Listing nine whale features, Thewissen, et al. conclude in Nature, "Pakicetids display none of these [whale] features"
- Since Gingerich and Thewissen, whales are now widely claimed to be the best fossil evidence for Darwinian evolution
- Real Science Radio often hears evolutionists use Rodhocetus and Pakicetus as evidence for evolution, as did AronRa
- Berkeley's Whale Evolution article says: "These first whales, such as Pakicetus, were typical land animals."
- Leading evolutionists focusing on teeth, ear bones, ankles, mouth, or genes thus argue for a different land ancestor
- Since 1998, leading institutions argue whether whales evolved from animals like hyenas, cats, deer, wolves, or hippos
- Darwin focused on the wide-open mouth and predator behavior to claim that whales evolved from bears
- Dr. Gingerich explains that what "is similar between hoofed hyenas and the archaic whales are the teeth."
- Tokyo Institute of Sciences focused on genome similarity and concludes that whales evolved from a hippo-like species
- The whale evolution saga pits geneticists against anatomists against paleontologists
- Neo-Darwinism claims that evolution happens in the genes, yet unlike whales, hippos have plant-eating teeth
- Geneticist claims whales evolved from hippos but paleontologists say hippos evolved tens of millions of years too late
- The water-deposited geologic column's flood sorted fossils contain no hippo bones lower than whale bones
- If today's neo-Darwinian paradigm were true, then hippo gene similarity leaves zero fossil evidence for whale evolution
- Gingerich's "problem" with hippos is that "they are all plant eaters; [but] whales today are all carvinovres."
- Science: "the teeth of... mesonychids, such resemblance is sometimes overstated and... represents ... convergence"
- Though whales are among the "best" fossil evidence for evolution, experts disagree even on their land ancestor
- Thewissen reconstructed Ambulocetus' skull with a blowhole where no skull fragments existed to justify it
- The world's leading museums display a full Ambulocetus skull as though it had been found, including with a blowhole
- Smithsonian and other Darwinist artists added tiny ears reminiscent of whales without fossil evidence to support them
- Whale eyes typically line up with the upper teeth so Gingerich doubts Ambulocetus because its eyes are atop its head
- Thewissen admits in Werner's film that a major claim for Ambulocetus, a "sigmoid process" ear bone, is questionable
- Whale evolution believer and expert Dr. Berta nonetheless refers to Thewissen's "purported whale characters"
- The "sigmoid process" is "questionable" and only "purported" because it doesn't look like that diagnostic whale trait
- The other "purported" Ambulocetus "whale" features are consistent with land animals but not with whale features
- Gingerich found Rodhocetus, Pakicetus, Synonyx and also Maiacetus ("mother whale") and Artiocetus!
- So the dynamic duo found Rodhocetus, Ambulocetus, Pakicetus, Synonyx, Maiacetus, Artiocetus, and  __________?
- The whale evolution cottage industry is run like a family business with proprietors who cannot be trusted
- (Feel free to send suggestions for additions to this RSR List to Bob@rsr.org) 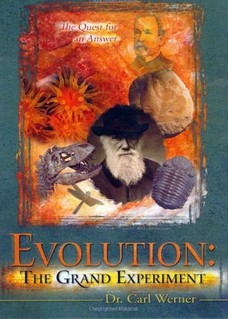 While maintaining his evolutionary political correctness, Wayne Carley, the president of the Nat'l Association of Biology Teachers nonetheless observed, "The very day I viewed the segment “Great Transformations," wherein P. D. Gingerich firmly stated that whales evolved from wolf-like carnivores, he and several colleagues published a paper in Science (293: 2239) showing that, in fact, whales evolved from ancestral artiodactyls." P.C. aside though, 100,000 U.S. professors think intelligent design is a significant scientific alternative to Darwinism, half-a-million U.S. medical doctors say that God brought about humans, and 30,000 U.S. public high school biology teachers do not endorse Darwinism in class.

Credit: Just as we credit RSR's List of Fresh Fossils and our rsr.org/dinosaur-soft-tissue#supplement to Brian Thomas over at the Institute for Creation Research, so too we credit Dr. Carl Werner for his startling exposé of the fraudulent whale transitional fossils that enabled us to produce this latest RSR List. Thank you Brian and thank you Carl!" - Bob Enyart & Fred Williams

* Calling on a Young Evolutionist at DU to Retract Whale Claim: At the University of Denver recent biology graduate Travis Barlock debated Worldview Academy founder Bill Jack. After the debate Bob asked Travis about his favorite transitional fossils example: whale evolution, whether he was aware that the discoverer of Rodhocetus has now recanted that the creature had flippers and a fluked tail? Barlock said he was unaware of that development and that if and when he confirmed this, he would of course stop using Rodhocetus as a favorite example of evidence for evolution. We are now calling on Barlock to retract his Rodhoectus claim.