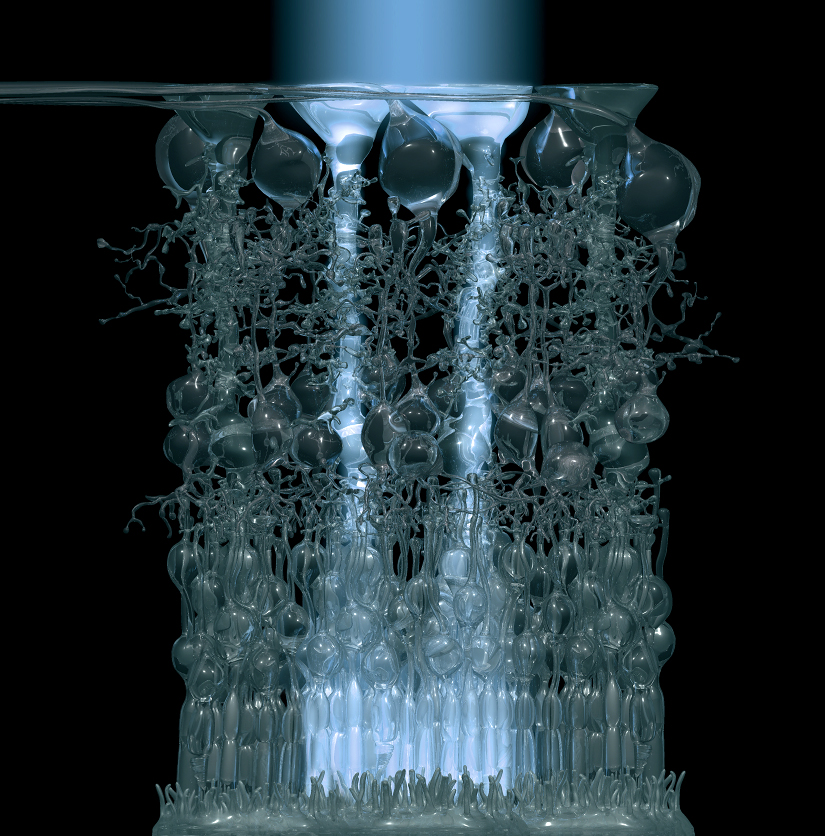 * RSR Interviews a UC San Francisco Professor of Ophthalmology: Real Science Radio hosts Bob Enyart and Fred Williams have fun analyzing Bob's informal debate with clinical professor of ophthalmology Dr. Gary Aguilar on the evolution of the eye. Learn about the latest science on the eye's anatomy from biblical creationists and about 150-year old outdated misinformation from the evolutionist. But make sure to hear Part 1 first and the conclusion is at Part 3.

* Ivan Schwab's Evolution's Witness -- How Eyes Evolved: Gary recommended that Bob read a new book by Dr. Schwab, a  colleague of Aguilar's at UC Irvine, about which Russell Fernald says that Evolution's Witness is "likely to be consulted by everyone interested in evolution and eyes." Within minutes of getting delivery of this book, on March 31, 2012, Bob wrote on the title page, with a number of folks around him signing as witnesses: "Prediction: Very little of this book will be about how eyes evolve." Dr. Aguilar described this textbook as a "tour de force" showing clearly how eyes evolved. During today's interview, Bob asserts that his prediction was valid, and that 99% of this book has nothing to do with how eyes evolve. It's a great anatomy book though!

* Missing Opsin Chapter: Opsin is the protein in photoreceptor cells that can detect a single photon and then signal that a photon has struck it. One might expect from a book on eye evolution that after the introduction, the author might include a chapter on an explanation, conceptually, of how opsin might evolve. Evolution's Witness is missing such a chapter. In vertebrates and invertebrates, opsin requires a chain of 150 to 250 amino acids which then must be folded correctly into a very specialized nano-machine which can pass along an output signal whenever the protein gets hit with a photon. But as creationists expect, no such chapter exists in the book. And actually, all the difficult problems that one would have to address if he were actually writing a book on How Eyes Evolved are missing from Ivan Schwab's book.

* The Missing Dichromatic Challenge Chapter: Another chapter missing from Ivan Schwab's book, Evolution's Witness, is the one that should describe how the visual cortex can begin to merge two layers of inforrmation into awareness of a single image. RSR is calling this our Richard Dawkins Dichromatic Challenge. Consider an organism which can see in black and white, and then estimate the necessary steps required to modify it to see color also, sufficiently well to give it a survival advantage. Of course, until the dichromatic vision provides a survival advantage, natural selection cannot guide its development. RSR's atheist interviewee, UCSF professor of ophthalmology Gary Aguilar never got around to acknowledging this problem, let alone answering it, and neither did his colleague Ivan Schwab. In the forward to Schwab's book, Evolution's Witness: How Eyes Evolved, eye evolution expert Dr. Russell Fernald echoes Dawkins' "Climbing Mount Improbable", writing that a "complex eye could be formed by natural selection," quoting Charles Darwin only by "numerous gradations" in which "the eye does vary ever so slightly..." If however there are no logical or physiological small steps that are even theoretically possible between a black-and-white type monochromatic system as compared to a color vision system then that would present a hurdle that Darwinism could not cross. For the obvious survival advantage that would come from seeing in both black and white and in dichromatic color requires detection of multiple wave-length input, the transmission to the brain over an optic nerve of an increased data stream, and the integration of the ever-changing monochromatic information with the color information, a non-trivial data processing feat. Of course, and this is virtually a tautology that cannot be rationally rejected, if there is no logical or physiological step in between "black and white" vision and a rudimentary color vision, then this challenge alone refutes Darwinism. RSR asserts that this is the case and that this alone falsifies evolution.

* Evolution Misled Eye Expert About the Eye: Gary Aguilar repeatedly claimed that the plica semilunaris (in the corner of your eye) is a functionless leftover of evolution. For example, at 3:15 into our interview, he said, "There are aspects of the human eye, for example, the nictitating membrane [which in some creatures is an additional, transparent eyelid] in lower animals is present in the plica semilunaris which has no function in humans; none whatsoever." Then to Bob's question, "Dr. Aguilar, can you repeat that, what is it that has no function whatsoever?" Gary answered, "The plica p-l-i-c-a semilunaris." However, according to the authoritative Duane's Foundations of Clinical Ophthalmology (Vol. 2, Ch. 2: Plica Semilunaris), the plica functions during movement of the eye, to help maintain tear drainage, and to permit greater rotation of the eyeball, for without the plica, the membrane called the conjunctiva would attach directly to the eyeball, restricting movement. Gary here illustrated something we describe about evolutionists, that rather than being informed with the latest knowledge from his own area of expertise, Aguilar claimed decades out of date "evidence", in his case, on the anatomy of both the wiring of the retina, and on the plica, claiming it is a functionless leftover. Rather than researching his Darwinian claims in the most relevant scientific literature, Aguilar, following Dawkins, ultimately got his outdated claims from a 150-year old book by Charles Darwin. Aguilar also repeats Dawkins' long-refuted claim, based on scientific ignorance and evolutionary bias, that the human eye is wired backward. For an explanation of why our eye is wired the reverse of an octopus, and optimally for human vision, listen to the Enyart-Aguilar-Eye-Excerpts, and see Dr. Carl Wieland's article, and a paper by Peter Gurney, a fellow of the Royal Colleges of Ophthalmologists in a peer-reviewed creation journal, as well as Gurney's popular article that deals with both the plica and the wiring. And read and hear Dr. Jerry Bergman explain that the function of the plica semilunaris has been documented since the 1930s. 2013 UPDATE: Dr. Aguilar wrote to Bob Enyart, "...let me acknowledge that the plica semilunaris is considered to have some function..." though he denied the plica aids in globe movement, thereby apparently disagreeing with the statement in Duane's Ophthalmology that, "if the conjunctiva were to directly join the eyelids to the globe, the globe and eyelids would both be restricted in movement." Perhaps Gary could share his disagreement with DO's Darlene Dartt and help everyone get to the bottom of that one particular detail.

* In Contrast to Our Serious Discussion, See Dawkins Describe Eye Evolution: Watch about one minute, beginning at 2:09 in to this friendly interview of Richard Dawkins on the evolution of the eye. His encapsulation of wild required complexity into absurd superficiality is common among evolutionists. Consulting Fernald, Aguilar, and Schwab makes it clear that Dawkins is being superficial, not because he's pressed for time in a popular interview, for Schwab takes 300 pages in a college-level "tour de force" textbook allegedly dealing with "how eyes evolved," and never gets beyond Dawkins' sheet-cupping superficiality.

* Playing the Parts: Make sure to hear Part 1 first and the conclusion is at Part 3.

* RSR Friend Andy McIntosh's Math Webinar: On Monday, Oct. 13th at 1 p.m. Eastern Time (11 a.m. MT) with many in the UK and the US, Bob Enyart will be watching Science, Mathematics and Beauty.

This talk will deal with a number of examples of the intriguing beauty and power of mathematics. Mathematics is more than a language and a tool of logic. When used to describe the physics of one system it is surprising how many other disciplines reflect the same principles so that the form of the equations can be similar. But we need to get underneath this and start with an even more fundamental concept concerning number itself. Dr. Jason Lisle has said,

"Numbers are concepts. Thus they are abstract in nature. They exist in the world of thought and are not material or physical. You cannot literally touch a number, or even see one, because they are not made of matter."