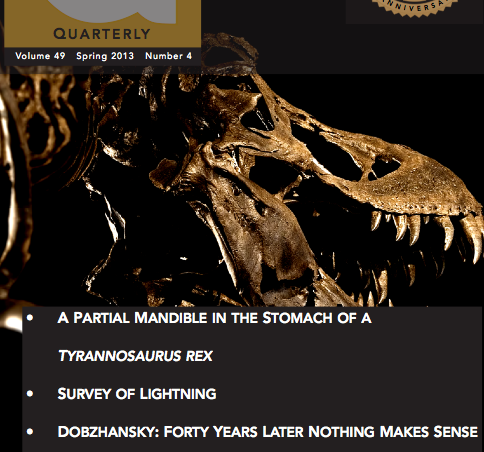 * Evolutionist: Nothing in Biology Makes Sense: Real Science Radio hosts Bob Enyart and Fred Williams continue their discussion about a paper in the latest journal edition of the Creation Research Society Quarterly. Forty years ago the scientist credited with developing the reigning paradigm of neo-Darwinism, Theodosius Dobzhansky, published his iconic article with the famed title, Nothing in Biology Makes Sense Except in the Light of Evolution. The decades since have seen his three predictions falsified; regarding genetics, the role evolution would play in biological science, and, of all things, a prediction about one particular Arab sheik whom Dobzhansky identified by name!

* To Get Bob's Paper, Just Click over to the CRSQ: The Creation Research Society just published Bob Enyart's paper,  Dobzhansky -- Forty Years Later Nothing Makes Sense (or in pdf), on the 40th anniversary of the most popular evolution article ever written. And if serious science writing doesn't scare you away, then Fred and bob highly recommend that you become a member of the CRS or just subscribe to the Quarterly! You'll get triple-bang for your buck! It would be a few minutes and dollars wisely invested, and in doing so, you will encourage their ongoing creation research efforts, enjoy creation-based peer-reviewed journal papers (like Bob's), and you'll help Real Science Radio accomplish one of our goals, which is to be a blessing to creationists everywhere!

Today’s Resources: Have you browsed through the Science Department in our KGOV Store? You may just love the superb resources there! Also, you can order any of our BEL and 3rd-party resources by calling us at 1-800-8Enyart.

* RSR's Popular "List" Shows 2013 Schedule:
January: List of Not So Old Things
March: List of Evidence Against the Big Bang
May: List of Peer-reviewed Dino Soft Tissue Papers
July: List of Answers to Hydroplate Objections
Aug: List of Scholars Doubting Darwin and the Big Bang
Sept: List of the Fine Tuning of Creation
Oct: List of Carbon 14 Where it Shouldn't Be
Nov: List of Genomes that Just Don't Fit
Another? If you have a suggestion for another RSR LIST show, please forward it to Bob@RealScienceRadio.com.