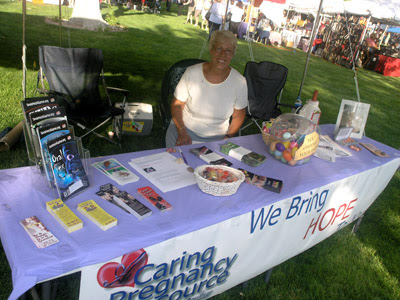 * Bob to Speak at CPC Banquet: If you'll be in Colorado on this day, please join Bob Enyart in Ft. Morgan on Jan. 26th at 6:00 p.m. (doors opens at 5:30) where he will speak for A Caring Pregnancy Center of northeast Colorado! You must pre-register for this $25-a-plate 2012 CPC Banquet by calling 970-842-4324. On today's program after reviewing the latest Tim Tebow news, Bob interviews personhood advocate and the center's executive director Jan Loesch. Founded in 1999 this missions-based ministries operates three centers covering six counties and 9,000 square miles. With this wide open territory, Jan has found a way to reach women in need. "We go to them!"

* Reminder: 75% of Iowans at the Caucus Voted for the Five of Six: Five of the top six Iowa Caucus candidates who signed the Personhood pledge combined received 75 percent of the vote! And because those five split the pro-life vote, it's not surprising that Rick Santorum only tied with Mitt Romney rather than trouncing him. And the 75% corroborates the observation by the People for the American Way that, "It is remarkable to realize how, in just a few years… the 'personhood' movement has gone from a fringe effort that had no support to a central part of the Republican presidential primary."

Post-Show Note: Read the extraordinary book, We Won't Get Fooled Again, by Steve Deace and Gregg Jackson! Where the Christian Right went wrong, and how to make America right again.