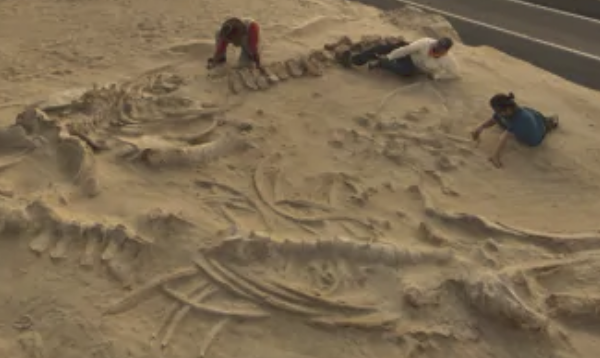 * Fossils, Bacteria, & Life Based on Information: Real Science Radio co-hosts Fred Williams and Bob Enyart discuss whale fossils in Chile, jellyfish fossils in Minnesota and dinosaurs in Mongolia and how they were deposited by a water catastrophe.  Bacteria have amazing abilities to work together to find food.  Scientists invent the lightest material on earth. A listener asks Bob to explain more on how life is information based as opposed to carbon based as was discussed in the AronRa debate.

* Fossil Graveyards: A new find of whale fossils in Chile leads scientists to theorize that they may have been buried in their mass grave by an earthquake or a storm.  Is this a viable theory or is there an alternate theory of this mass burial?  Consider jellyfish fossils in Minnesota, dinosaurs in Mongolia, petrified forests and the evidence for a water catastrophe.

* Bacteria's Amazing Abilities: Professor Eshel Ben-Jacob of Tel Aviv University in his Microbes Mind Forum found that bacteria are amazingly efficient at finding the best path towards food,  work together to avoid harm and swarm together like fish.

* Life is Information Based: Is what you are reading on this page determined by the structure of the pixels and the electronics or is it the information imbedded within?  Just as the ink on a written page has no information to determine a design, carbon doesn't determine the design of life.  It is the information inherent in the genetic code which defines the life of an organism.

* Bob & Fred Recommend Browing in the RSR Science Department: If you enjoy the science you hear about on our fast-paced RSR radio shows, you'll really love our online store with its books, audio, and DVD science materials, and debates, in our store's Science Department! Please help keep RSR on the air and online for another year by shopping in this KGOV Store, or by getting a monthly subscription to our resources, or by making a one-time donation or even a monthly pledge to RSR and Bob Enyart Live!

Today’s Resource: Have you browsed through our Science Department in our online store? Check out especially Walt Brown’s In the Beginning and Bob’s interviews with this great scientist in Walt Brown Week! You’ll also love Dr. Guillermo Gonzalez’ Privileged Planet (clip), and Illustra Media’s Unlocking the Mystery of Life (clip)! You can consider our BEL Science Pack; Bob Enyart’s Age of the Earth Debate; Bob's creation/evolution debate that hits on Junk DNA with famous evolutionist Dr. Eugenie Scott (see description below); and the superb kids' radio program Jonathan Park: The Adventure Begins!

Eugenie Flubs Genetics Prediction, Bob Hits the Bull's-Eye: Asked to present her best evidence for evolution, Eugenie Scott offered the "evidence" of Junk DNA. This scientist, from her Darwinist worldview, made a philosophical argument that a Creator would not fill our DNA with mostly junk. (Unlike the relatively few gene segments that code for the 20,000 proteins in the human body, the widespread evolutionary claim of the 1990s was that the rest of the genome had no function and so was called Junk DNA.) Bob, the Christian fundamentalist, answered from his biblical worldview, that our knowledge of genetics was in its infancy, and that it was too early to make the determination that all those non-coding segments of DNA had no function. The next decade of explosive genetic discoveries overwhelmingly validated this creationist perspective, so much so that aside from coding for 20,000 proteins, it is estimated that the remainder of the genome has approximately one million other functional regulatory segments of DNA. So much for junk. Fulfilled predictions, as the world saw with Einstein, go toward scientific credibility. However, Dr. Scott strongly rejected this creationist prediction making an extraordinary claim, (which Bob immediately suggested she retract), that scientists currently knew everything they would ever need to know about genetics to conclusively state that all those regions were useless junk. Bob would love a rematch. But Eugenie Scott, (Ph.D. in Physical Anthropology, leading anti-creationist, and director of the National Center for Science Education), who had just debated evolution on a nationwide PBS television program, ended this one-hour program with Bob stating, "Well, I don’t debate."