* A Nucleus Phenomenon and a Ph.D. in Nuclear Physics: Real Science Friday co-hosts Fred Williams and Bob Enyart discuss an interview with Dr. Jim Mason, who has a B.Sc. in engineering physics and a Ph.D. in experimental nuclear physics and has had a 37-year engineering and management career in defense electronics including the positions of Engineering and Chief Technology Officer for one of Canada’s leading defence electronics companies. Dr. Jonathan Sarfati interviewed Dr. Mason about physics, Carbon 14, coal, and diamonds in the Summer 2011 issue of Creation magazine. Evolutionists routinely claim that Bob and Fred mislead those who have no science background with our argument that C-14, which can only last for thousands of years, not millions, in coal and diamonds (not to mention in amber, dinosaur fossils, oil, petrified wood, natural gas, and everywhere it shouldn't be), is powerful evidence against million-year-old dates. Now, a prominent Canadian engineer with a Ph.D. in nuclear physics, Dr. Jim Mason, makes the same argument, and Bob and Fred doubt that they're able to mislead a scientist all the way up in Ontario!

* Do You Know About the Coordination that Takes Place to Replicate Nuclear DNA? We think you're going to LOVE THIS! God is SO COOL! Listen to the beginning of today's show, or check out Meta-Information at creation.com!

* Bob & Fred Suggest the BEL Science Store: If you enjoy the science you hear about on our fast-paced RSR radio shows, you'll really love the books, audio, and DVD science materials in our online store's Science Department! The KGOV September Telethon is 9% toward its goal of $20,000 in donations and purchases from our store, and $20 per month pledges! So, please help keep RSR airing and online for another year by shopping in the KGOV Store, getting a BEL monthly subscription, making a one-time donation or a monthly pledge to RSR and Bob Enyart Live!

* Post-Show Updates:
- Lunar Prediction: Data obtained by NASA's launch tomorrow of two GRAIL ships headed for the moon to explore its interior will show evidence that impactors have hit the near side of the Moon far more severely than the far side. (Just fyi, the web's archive.org captured this prediction on Oct. 11, 2011, just 32 days after we posted it here.)

- The Media is Catching Up with Creationists: With Dr. Walt Brown, creationists have long explained that the gold in the crust of the Earth could not have remained through a molten period of hundreds of millions of years because being so heavy it would have sunk to the Earth's core. Finally, that difficulty is being publicly acknowledged. And of course, to maintain their godless origins belief, evolutionists are compelled to make a secondary assumption to accommodate this: that an extensive stream of meteorites brought the gold to the Earth after it solidified. :) But there's a lot more nickle in meteorites than gold. Yet, this secondary assumption is also used to explain where the water on Earth has come from. So, if all the gold and water came from meteorites, there's about four billion years of missing nickel on the Earth. 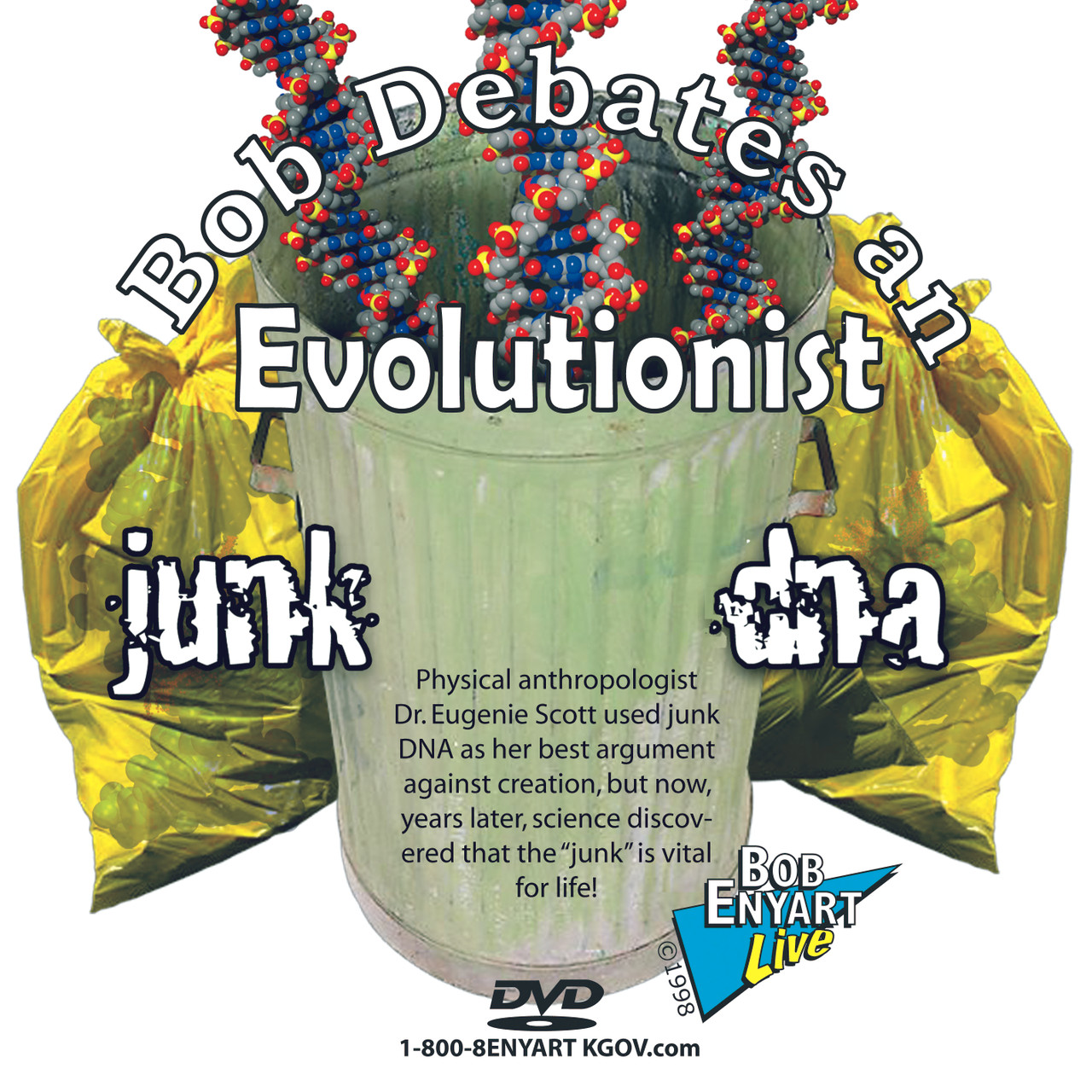 Today’s Resource: Have you browsed through our Science Department in our online store? Check out especially Walt Brown’s In the Beginning and Bob Debates an Evolutionist on Junk DNA.

Eugenie Flubs Genetics Prediction, Bob Hits the Bull's-Eye: Eugenie Scott offered the "evidence" for evolution of Junk DNA. This scientist, from her Darwinist worldview, made a philosophical argument that a Creator would not fill our DNA with mostly junk. (Unlike the relatively few gene segments that code for the 20,000 proteins in the human body, the widespread evolutionary claim of the 1990s was that the rest of the genome had no function and so was called Junk DNA.) Bob, the Christian fundamentalist, answered from his biblical worldview, that our knowledge of genetics was in its infancy, and that it was too early to make the determination that all those non-coding segments of DNA had no function. The next decade of explosive genetic discoveries overwhelmingly validated this creationist perspective, so much so that aside from coding for 20,000 proteins, it is estimated that the remainder of the genome has approximately one million other functional regulatory segments of DNA. So much for junk. Fulfilled predictions, as the world saw with Einstein, go toward scientific credibility. However, Dr. Scott strongly rejected this creationist prediction making an extraordinary claim, which Bob immediately offered her to retract, that scientists currently knew everything they would ever need to know about genetics to conclusively state that all those regions were useless junk. Bob would love a rematch. But Eugenie Scott, (Ph.D. in Physical Anthropology, leading anti-creationist, and director of the National Center for Science Education), who had just debated evolution on a nationwide PBS television program, ended this one-hour program with Bob stating, "Well, I don’t debate."