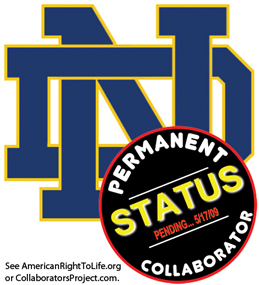 After yesterday's BEL program on the Collaborators Project warning, WorldNetDaily.com reported on the pending designation of Permanent Collaborator Status for the University of Notre Dame. Developing...

* Bob Now Apologizes to Jim On Air: Correction! Today Bob on air apologized to Jim from Denver for thinking that as a caller he had not read the word "whisper" when he was reading Romans 1:29. Bob was looking up the verse while Jim was reading it, and wasn't sure if he had heard Jim read the word whisper. Then when Jim wasn't sure either, Bob assumed the caller had missed the word. Bob's point was this: when the Bible lists whispering and debating in a group of sins (KJV: debate; NKJV strife), it does not mean that any whisper and any debate is a sin (Jesus, the prophets, and the apostles engaged in varying degrees of whispering and debating). The warning against whispers refers to quietly spreading harm as in backbiting, and the warning against debate refers to creating strife toward an unrighteous goal. Jesus Himself said that He did not come to bring peace but a sword, to divide. For the truth is unavoidably offensive, and the Lord taught that if people hated Him, they also would hate those who followed Him. Jim loves the Lord. We love the Lord. And we love Jim. We disagree with his claim that Hurricane Katrina was a judgment from God. Katrina was a terrible storm that killed about 2,000 people. When God actually does miracles, like the parting of the Red Sea, drowning Pharaoh's army, restoring sight to the blind, and the raising of Lazarus, countless unbelievers acknowledge the miracles. Today, alleged supernatural events are claimed by true believers only. Drunk drivers often survive while killing innocent young victims, and research would show that Christian passengers have no greater survival rate than atheists in plane crashes. Of course God can intervene supernaturally, but the flippant claims by so many discredit the Gospel of Jesus Christ. And what's worse, those who speak for God without authority and wrongly attribute murder, disaster, and judgments to God are ignoring the warnings against such in Scripture. Christians who attribute specific tragedies to judgment, without authority from God to do so, behave like Job's accusers Eliphaz, Bildad, and Zophar, and like the religiously superstitious men whom the Lord corrected in Luke 13:1-5. In the Bible (and out), God does not appreciate being misrepresented by those who attribute murder, mayhem, catastrophe, disease and confusion to God, as though they have free rein to speak for Him regarding particular events. After Job's calamity, God rebuked those who misinterpreted that man's misery as a punishment from God. (Bob is currently teaching through the book of Job on Sunday nights, and you can get a copy of those fascinating Job Bible studies in progress by calling 1-800-8Enyart.)

Today's Resource: Check out the great BEL subscription services like the Monthly Bible Study Album, Bob's Monthly Sermons, or the BEL Televised Classics which brings perhaps the highest rated nightly Christian show ever back via DVD to your home! To subscribe click on any of the links above or call right now, 1-800-8Enyart (836-9278)!