RSR Takes on the Smithonian's Hall of Origins

RSR host Fred Williams is joined by Brodie Leitch to manhandle the Smithonian and their deceptive ape-men articles. When you google the word 'evolution', you'll be inundated with the infamous 'march of progress' illustration in various forms. Polling shows that these illustrations convince more Americans of evolution than any other method. Fred and Brodie first discuss the myth and illusion behind the so-called 98.6% similarity between chimps and humans. Even if true, mathematics long ago showed that even a 1% difference is impossible to achieve through natural selection and random mutation. The evolutionist' sleight of hand is further exposed when considering that they are only comparing select parts of the genome, and when taking indels into account the difference drops to 87%. Two Smithsonian alleged ape-men, Toumai and Millennium Man, based on only a handful of fossil fragments, are easily shown to be merely apes that even plenty of secular scientists acknowledge are simians that have nothing to do with so-called human evolution.

“Sahelanthropus tchadensis” (pronounced: “sah-he-lan-thruh-puhs cha-den-sis”, nicknamed: “Toumaï” or “Hope of Life”) consists of only 9 skull fragments, was “discovered” in Chad, West-Central Africa in 2001 and is allegedly “one of the oldest known species in the human family tree.”

According to an article from the Smithsonian, Sahelanthropus “had a combination of ape-like and human-like features.” Despite the fact that the “first (and, so far, only) fossils of Sahelanthropus are nine cranial specimens” they claim that “the skull (specifically the foramen magnum) provides scientists with evidence that Sahelanthropus walked upright.”

According to their article: “The foramen magnum (the large opening where the spinal cord exits out of the cranium from the brain) is located further forward (on the underside of the cranium) than in apes or any other primate except humans. This feature indicates that the head of Sahelanthropus was held on an upright body, probably associated with walking on two legs.”

However, according to CARTA (The Center for Academic Research and Training in Anthropogeny) “posterior drift of the foramen magnum occurs in nonhuman primates through the resorption at the posterior end of the cranial base and deposition at the anterior end.”

In other words, when an ape is born, the large opening in the base of the cranium is at the center of the skull, but as the chimp grows, the opening naturally moves toward the back of the skull. CARTA concludes that:

Which explains why the Smithsonian was still asking (in the same article): “What was their primary form of locomotion?”

The position of the foramen magnum as well as the “small canine teeth,” “short middle part of the face,” “small brain, (even slightly smaller than a chimpanzee’s)” “sloping face,” “very prominent brow-ridges,” and “elongated skull,” indicate that the skulls are those of juvenile chimps, not ape-men. 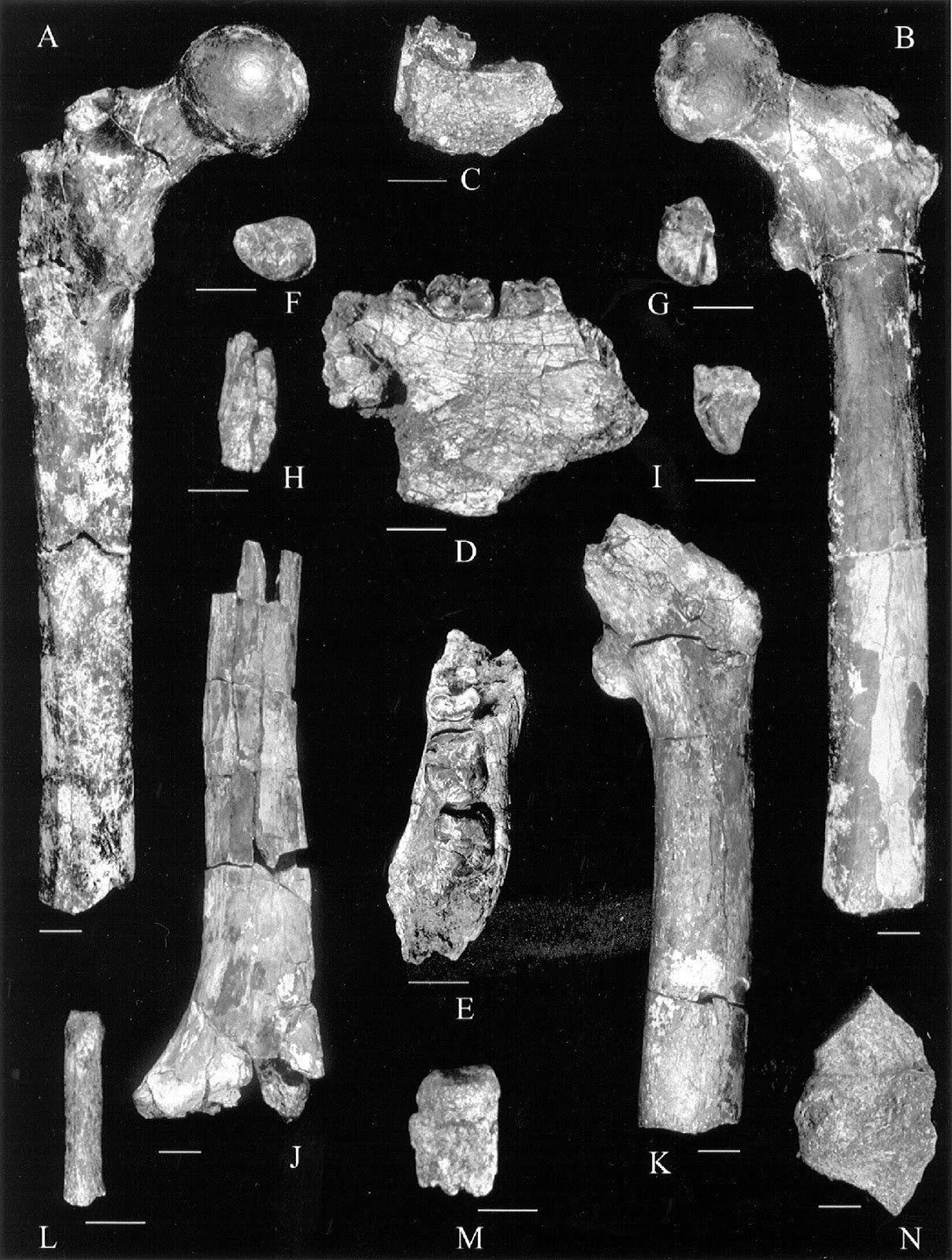 “Orrorin tugenensis”, (pronounced: “Oh-roar-in, too-ga-nen-sis”) which translates “original man” in the Tugen region, and was nicknamed “Millenium Man”, consists of only 14 fossil fragments (allegedly from at least 5 individuals) which were discovered at four different sites (Cheboit, Kapsomin, Kapcheberek, and Aragai) in the Tugen Hills region of central Kenya. The fossils include a few limb bones, jaw fragments and isolated teeth.

The Smithsonian claims that “Orrorin is at the base of the human family tree, and… walked upright on two legs.”

Keeping in mind that these bold claims are based on 14 bone fragments, the (alleged) evidence that these bones belonged to a bipedal (upright walking) creature, according to the same article, comes from the femur:

“The most important fossil of this species is an upper femur, showing evidence of bone buildup typical of a biped” and “the upper part of this femur (BAR 1002’00), is similar in size to those of other large apes. But the angled part more closely resembles that of modern humans. It formed a strong bridge with the hip to support the body’s weight, suggesting Orrorin tugenensis walked upright.”

They claim that the femur formed a strong bridge with the hip, but don’t have any of the pelvis. It’s also worth noting that one of the most unique parts of this femur is the greater trochanter, [pronounced: “trow-kan-tr”] but the greater trochanter, as reported by the journal “Nature”: “is broken away slightly above it’s root.”

So one of the most significant parts of this “ape-man” is not a part that they have, but a part that is absent. To make matters better (for creationists) this part of the femur is not absent due to anatomical structure, but due to damage and decay of the bone.

Along with the problems posed by creationists, many evolutionists have criticized this alleged “human ancestor”. Soon after the initial publication of the fossils, Dr. David Begun of the University of Toronto commentedthat the fossil fragments representing “Orrorin” could not reveal whether it was “on the line to humans, on the line to chimps, a common ancestor to both, or just an extinct side branch." Dr. Begun later stated that “the evidence for bipedalism in Orrorin is ambiguous.”

“Though they’ve been hailed as remnants of some of our earliest hominin ancestors, paleoanthropologists Bernard Wood of George Washington University and Terry Harrison of New York University say they're probably just non-hominin ape bones.”

Dr. Harrison, also stated (in a separate article) that: “It does not make sense to interpret the anatomical features of Orrorin tugenensis as a biped that could climb trees. I see it as a good arboreal, [tree dweller] quadruped [walks on 4 limbs] that has a package of features like [those found in] Australopithecus.”

The Australian Museum reports that: “some features of the leg bones are found in non-bipedal primates, suggesting that this species may not be bipedal. At the moment the evidence is inconclusive.”

In fact, this evidence is so inconclusive that the Smithsonian asks (in the same, previously-mentioned article): “Is Orrorin a direct human ancestor to Homo sapiens?” And “Did Orrorin routinely walk on two legs?”