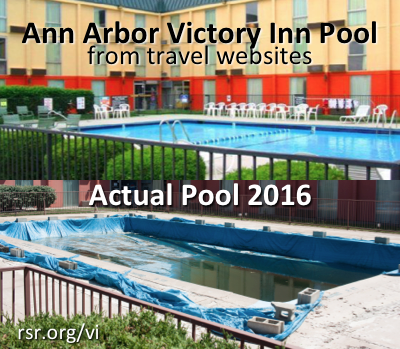 * The Dangers of Marijuana: New York City: Bob shared the Christian message with a network TV personality, Krishna Andavolu of Weediquette (and his crew) in New York City in an appearance for a TV program on pot.

* Flying & Flophouses for Fun & Profit: Hear tales of travel woe, and a hilarious review of what may be the grossest hotel in the Midwest, Ann Arbor's Victory Inn and Suites! And here's Bob's TripAdvisor.com review:

Don't stay in this hotel unless it's ever demolished and rebuilt. Right next to the front door is their scum-infested, off-limits, should-be-condemned broken down pool. And with it, VIS puts their best foot forward. You don't want to hear about the stench of mold that smacks you when you force open their stuck front doors; the oppressive odor of chemical pesticides (which is what that smell was, I can only hope); as you burrow further into your new home you notice that the aroma has its own unique taste which overwhelms the buds upon entering one's room; my room door did not work by the way, though I asked for it to be fixed, for the whole time I was there. The toilet never shut up; the shower well watered the moldy ceiling and toilet area; the phone looked usable until one lifted the receiver.

Overall, I'd say two things: SAVE YOURSELF! And, doesn't Ann Arbor have a health department?

* BEL Craigslist Ad Asked for a Pool Photo: Since Bob didn't think to take a photo of the pool while he was at the hotel, we placed a Craigslist ad in Ann Arbor, and a very helpful local snapped the above image. Then upon seeing the contrast, wrote:

WOW! That is how they were advertising it? I honestly thought it was abandoned when I got there. There were a ton of broken down cars in the front and I looked inside the lobby and it was dismal. I'm glad you survived the two nights!

Actually, photos like the top image above are listed on TripAdvisor and Travelocity as though they were taken by "Travelers". Yet these travel websites are not nearly as old as the hotel itself and that pool certainly hasn't looked that good during the lifetime of these sites. Demolition is too good for this hotel. Perhaps after being condemned, the U.S. military should use it for target practice. No?