After Arrest at Focus on the Family, Enyart Headed to Court

* Report from the Road: Bob Enyart gives a report from the road while headed to Colorado Springs for one of the court hearings resulting from a sit-in protest at Focus on the Family. Bob was one of the eight people arrested among those at an American Right To Life protest of Dr. James Dobson. What was it all about? First, see the pledge which Dr. Dobson has now violated:

American RTL Action, the political 527 group, is exposing Focus on the Family's Dr. James Dobson for violating his public pledge in which he invoked the name of God. ARTL members will protest Dr. Dobson at his headquarters in Colorado Springs on Thursday, September 4.

On April 28, 1990 at the Washington D.C. Rally for Life on video and to hundreds of thousands of Christians, Dr. Dobson stated, "I want to give a pledge to you on a political level... I have determined that for the rest of my life, however long God lets me live on this earth, I will never cast one vote for any man or woman who would kill one innocent baby." James Dobson has endorsed John McCain for president, a Republican who has recently voted to authorize funding to kill some children by surgical abortion [and who has become increasingly pro-choice even since National RTL concluded that: "John McCain is a Threat to the Pro-Life Movement"].     American RTL Action calls upon Jim Daly, the president of Focus, to take down the video of Dr. Dobson's pledge which still plays for visitors at their Welcome Center. "John McCain funds the killing of countless children," said the group's director of research Darrell Birkey.   ARTL Action unfurled the massive DNC Sheets Of Shame abortion protest sign on a mountain overlooking the DNC in Denver. "American RTL will expose both Republican and Democratic politicians who advocate the killing of unborn children," said the group's president, Steve Curtis, who is also a former chairman of the Colorado Republican Party.

Please read this letter from Focus on the Family which admits that Dr. Dobson has compromised on the pledge he made before God and then, sadly, tries to justify that blatant sin. And in yet another example of Focus personnel disseminating blatantly false information, vice president of public policy Tom Minnery claimed on TV-11 News, "I believe, that if he [John McCain] becomes president, we will see him turn around and agree with president Bush on a very strong, no exceptions prohibition to embryonic stem cell research." The absurdity and blatant falsehood here is that George W. Bush DOES NOT advocate a ban on killing ANY embryonic boys and girls; instead, he has authorized funding to dissect and kill these snowflake children. President Bush has NEVER advocated a ban on dissecting and killing the tiniest boys and girls by the grisly research done on embryos, but rather became the first president ever to fund such Mengele-esque lethal harvesting of human parts. Worse, his immoral legacy may have had the effect of jumpstarting research on these tiniest of kids. We will report it here if Focus on the Family ever publicly corrects this falsehood. And further, if McCain didn't change his support for killing the tiniest children to get the support of Christians during any of his presidential primaries, win or lose, it is absurd to deceive Christians into thinking that he will do so now that he has the support of the pro-life industry.

* See More: at kgov.com/james-dobson-breaks-his-pledge-to-god. including this: 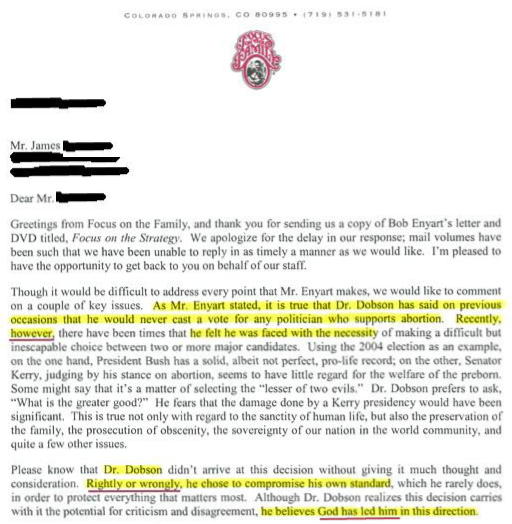 "Dr. Dobson is violating the pledge he took before God," said Birkey, "by voting for John McCain. Both the Sarah Palin distraction, and the candidate's rhetoric to Rick Warren claiming he believes that human rights begin at conception, are belied by John McCain's long tolerance of chemical abortifacients and funding of the dissection of the tiniest embryonic boys and girls."

"In violating his 1990 pledge in which he invoked the name of God, Dr. Dobson has lost the moral authority to speak for Christians," said Curtis. "He can speak for Republicans who do not fear God, but he cannot speak for the Body of Christ. Jim Daly, please remove that video of Dr. Dobson's broken pledge from the Focus on the Family Welcome Center; you dishonor the Lord as you portray Dr. Dobson as principled and as keeping his oath before God."

Today's Resource: You can view BOTH of our powerhouse Focus on the Strategy DVDs for only $22.99! Get them now while supplies last! (Or, get them later, because we can just make additional copies :) when we run out.)

* Post-show Note: Have you seen Bob's Entropy and evolution debate? Bob debated a trained evolutionist about an article from the American Journal of Physics, and the author of that article, Daniel F. Styer, has joined the debate! If you like science, and have interest in the creation/evolution debate, check out this debate!

* BEL Indiana Seminars: Bob Enyart is coming to Indiana, Goshen in the evening of Jan. 29 and Indianapolis on Saturday January 31, to present a brand new BEL Seminar titled Hermeneutics: Tools for Studying the Bible. Click for more info!