* Fred Interviews Bob on the 7th Int'l ICC: Along with a few hundred others, including many engineers and scientists from some of the world's most prestigious secular institutions, Bob Enyart attended the 7th International Conference on Creationism in Pittsburgh. Fred Williams interviews Bob about the happenings that may be of interest especially to the Real Science Radio audience.

Bob Enyart noticed that while other flood and creation models are knocking themselves out, in the process, though unintended and unstated, they seem to be highlighting the strengths of Dr. Walt Brown's Hydroplate Theory.

"If the government were actually reading my emails
I'd have hope for this country." -Bob Enyart, rsr.org Hear the Conclusion: See also our RSR report on the 7th ICC Pt 2.

* Overview of Baumgardner's Energy Source: Using sophisticated simulation software, Dr. John Baumgardner has considered various mechanisms to generate a powerful enough global water currents to accomplish the massive erosion and sediment distribution during the 150 days of the great flood of Noah's day. Niether his own CPT mechanism, nor concomitant earthquakes, volcanism, meteorite strikes, etc., provide sufficient energy to accomplish the task. Very cautiously, John proposed that perhaps six planetary flybys occurred, when one moon-sized planet was caught by Earth's gravity and made six highly elliptical orbits before being pulled away by some other body and then flying off into space.

* Excerpts from Dr. Baumgardner: From John Baumgardner's 2013 paper in the Proceedings of the 7th ICC, the most relevant descriptions of this in his paper are these:

Based on this result, it is proposed that six near encounters with a moon-sized body temporarily captured by the earth can plausibly account for the six mega-sequences that are so prominent in the Phanerozoic sediment record. (p. 1)

The only viable candidate mechanism I have thus far been able to identify is the tide caused by a near approach of a moon-sized or larger body. ... Therefore, as a working hypothesis, I assume it is the tide raised by the near approach of a moon-sized body that provides the forcing for the water motions and the resulting erosion, sediment transport and deposition processes which are modeled and described in this paper. (p. 2)

At the beginning of the calculation, it is assumed that a body with a mass at least 0.3% of that of the earth makes a near approach across a point at (90°E, 30°N) so as to raise a 2500 m high tide at that location and also 180° away on the opposite side of the earth. If the body has a mass exactly 1% of that of the earth, from (17 [the equation on p. 12]) the distance R at closest approach is 2.94a, or 18,740 km from the earth’s center. This distance is comfortably beyond the Roche limit. The earth’s gravity acting on the tidal displacements generates water flow with speeds exceeding 270 m/s. We note that by comparison the moon’s mass is 0.0123 times that of the earth. (p. 12)

I therefore cautiously propose a scenario of multiple close approaches by the same body in a highly eccentric orbit, with each close approach raising a tide on the order of 2500 m high. Based on the prominence of six mega-sequences in the Phanerozoic record, I explored the possibility that there might have been exactly six close approaches. To be able to raise a tide on the order of 2500 m and also to remain beyond the Roche limit at closest approach, the mass of body must exceed about a fourth the mass of the moon. Of course, the smaller the mass of the body, the easier it is for the earth temporarily to capture it. If the body made only six close approaches with the earth, then presumably an interaction with some other body caused it subsequently to break free of the earth’s gravitational dominance. What might the time interval have been between the tidal pulses? Rather arbitrarily I chose an interval of seven days, such that six tidal pulses fit within the first 40 days of the Flood cataclysm. I assumed that the geometry of the orbit of the body as well as its phase relative to the rotating earth were identical for all six tidal pulses. (p. 15)

Without debate, this is a speculative scenario. Nevertheless, the mega-sequences, so prominent in the sediment record, particularly the global erosional unconformities that divide one mega-sequence from the next, are features that cry out for explanation. I therefore meekly offer this scenario as a candidate attempt to account for these observations. (p. 16)

* RSR's Conclusion of the Matter: Dr. Baumgardner is a hero of the creation movement including for his work on the RATE project demonstrating accelerated radioactive decay. Also, he has spent many years working to understand the dynamics of the flood and of creation, including regarding the historical implications of the record of radioactive decay. It appears though that the leading proponent of Catastrophic Plate Tectonics (CPT) may himself have presented a catastrophic hurdle to the success of his own model. 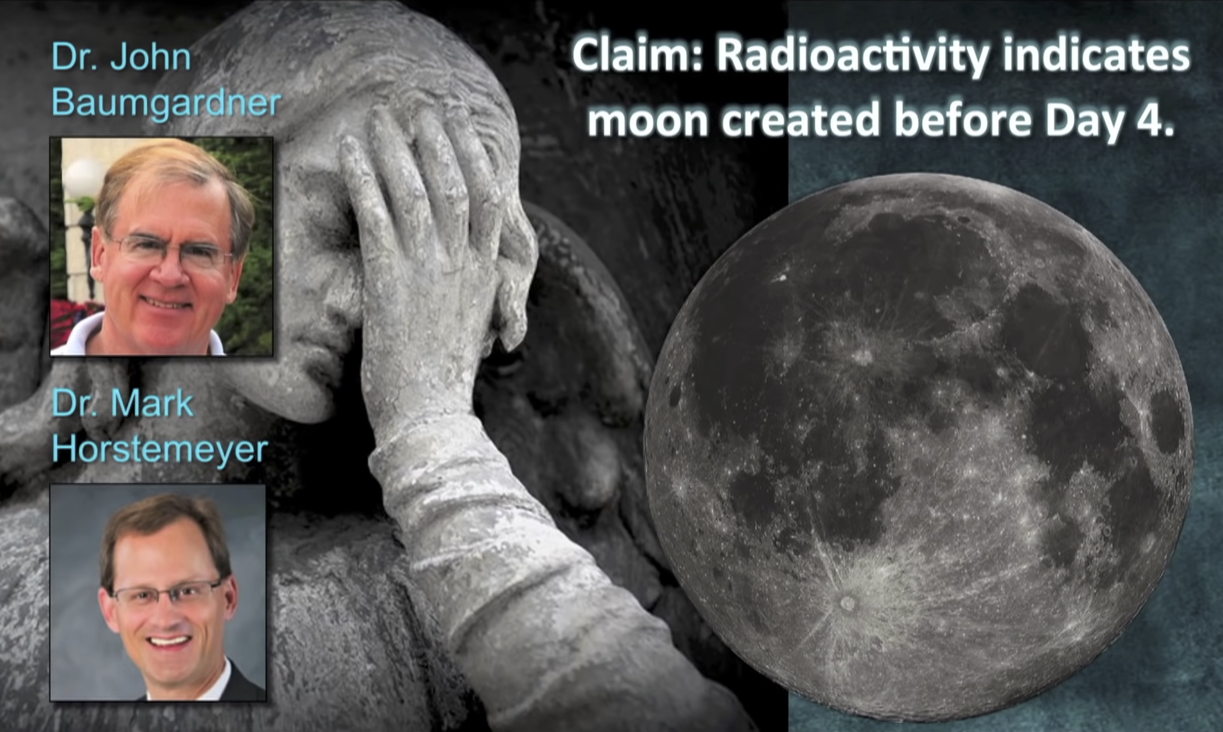 Further, Dr. Baumgardner suggested in a plenary session that lunar radioactivity has compelled him to suggest that the Moon must have been created before Day Four. Thankfully, Dr. Danny Faulkner immediately strongly admonished Dr. Baumgardner, reminding the audience that for many years biblical creationists have battled such claims coming from old-earth progressive creationists like Hugh Ross. Unlike the Hydroplate Theory, CPT does not explain what caused accelerated radioactie decay, and it also does not explain what originated our radioactivity since the resulting birth defects would not have been part of the paradise that God originally created. It seems that we should never put so much stock into our own models that we would suggest that the Moon was created before Day Four. This all screams out for a wider consideration among creationists for Dr. Walt Brown's theory on the Origin of Earth's Radioactivity.

See this two-minute segment. Clicking play begins the video at 2:46:15.

* Post-show Update/Correction: From the lead proponent of the Catastrophic Plate Tectonics model, Bob reported on Dr. John Baumgardner's oral presentation regarding a possible source of the energy for the Flood's worldwide erosion and dispersement of sedmient. From hearing the oral report, Bob thought that Dr. Baumgardner had suggested the near misses of six planets that would sufficient energy. But after reading Dr. Baumgarnder's paper (see excerpts below), Bob corrects that to a single planet about the size of our Moon being captured by the Earth, making six highly eliptical orbits, and then being graviationally drawn away and thrown out into space. We are glad to make this correction, but we note that either way, this serves primarily to illustrate that the CPT model is not the correct solution to the Flood geology questions.

Post-show note: We have asked the creationist animator interviewed by RSR last year to consider demonstrating this visually, which animation may help people see whether this idea is truly explanatory or is a rescue device. Stay tuned!

Today’s Resource: Have you browsed through our Science Department in our online store? You just might love it! And, if you get one of our resources, you'll help keep Real Science Radio on the air!