* March 10, 2009 In-Studio Interview of the Truth Truck Driver: (2020 Update: Ron Brock has gone to be with the Lord! See In Memoriam, below.) Bob Enyart interviews close friend and fellow worker in the Gospel, Ronald Brock. Ron travels the country testifying for the Gospel of Jesus Christ and against the intentional killing of innocent children in the womb. Hear also Ron's interaction with one of the most extraordinary Christian families in the nation, the Weimers, Frank and Cindy and their children. See Ron's website for news reports of his outreach and photographs of his truth truck. Bob wants everyone to know that this was one of his most enjoyable interviews of the year! 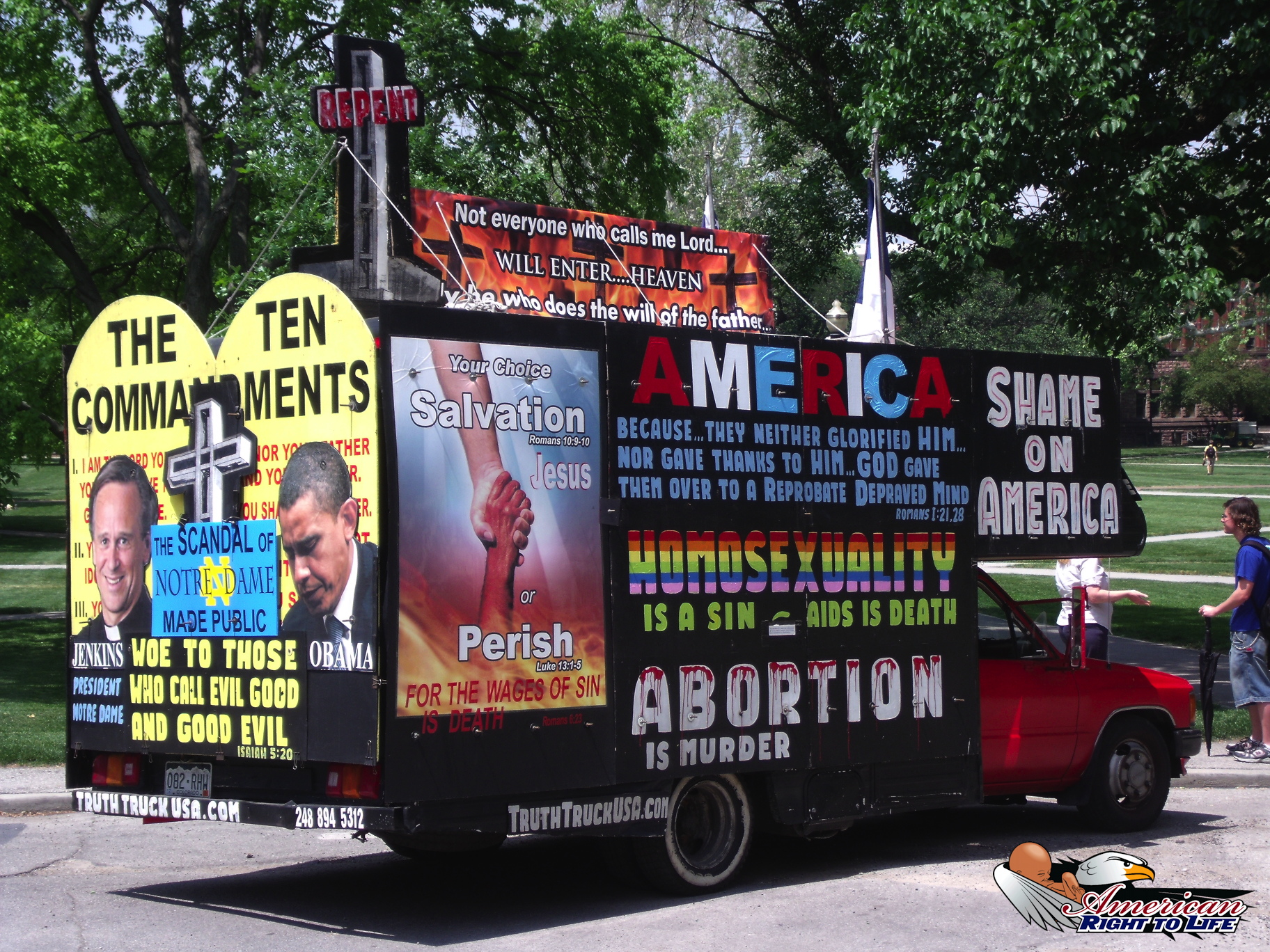 * 2016 Update: Ron quoted to Bob from memory the following:

If I profess with loudest voice and clearest exposition every portion of the truth of God except that little point which the world and the Devil are at that moment attacking, I am not confessing Christ, however boldly I may be professing Christ. Where the battle rages, there the loyalty of the soldier is proved, and to be steady on all the battlefield besides, is mere flight and disgrace if he flinches at that point.  -Great quote though not from Martin Luther

All who desire to live godly in Christ Jesus will suffer persecution. -The Apostle Paul, 2 Timothy 3:12

* 2019 Update: And three years later still, on August 21, 2019 at age 81 and back on the road a few weeks after a heart operation, talking with Enyart on the phone, Bob mentioned to Ron his quote of Timothy from a few years earlier, and Ron said, Let me add to that...

I thank Christ Jesus our Lord, who has given me strength, that he considered me trustworthy, appointing me to his service. - Paul, 1 Timothy 1:12

I have fought the good fight, I have finished the race, I have kept the faith. 8 Finally, there is laid up for me the crown of righteousness, which the Lord, the righteous Judge, will give to me on that Day, and not to me only but also to all who have loved His appearing. - 2 Timothy 4:7-8

Today’s Resource: At store.kgov.com, in preparation for the 2010 release of Focus III, you can get the Focus on the Strategy I & II two DVD combo (for yourself or give it as a gift!) containing the blockbuster analysis of pro-life and political strategy. Focus on the Strategy, advertised by other ministries as the DVD of the Century, is the blockbuster analysis of Christian political strategy, filmed before a live audience of 300 Christian activists in which Bob Enyart reveals the presentation he gave at Focus on the Family to Tom Minnery, VP of Public Policy for Dr. James Dobson. And the sequel, film festival finalist Focus on the Strategy II, with its dozens of video and audio clips which has extraordinary endorsements from many Christian leaders as the must see video for everyone who wants to end 'legalized' abortion. 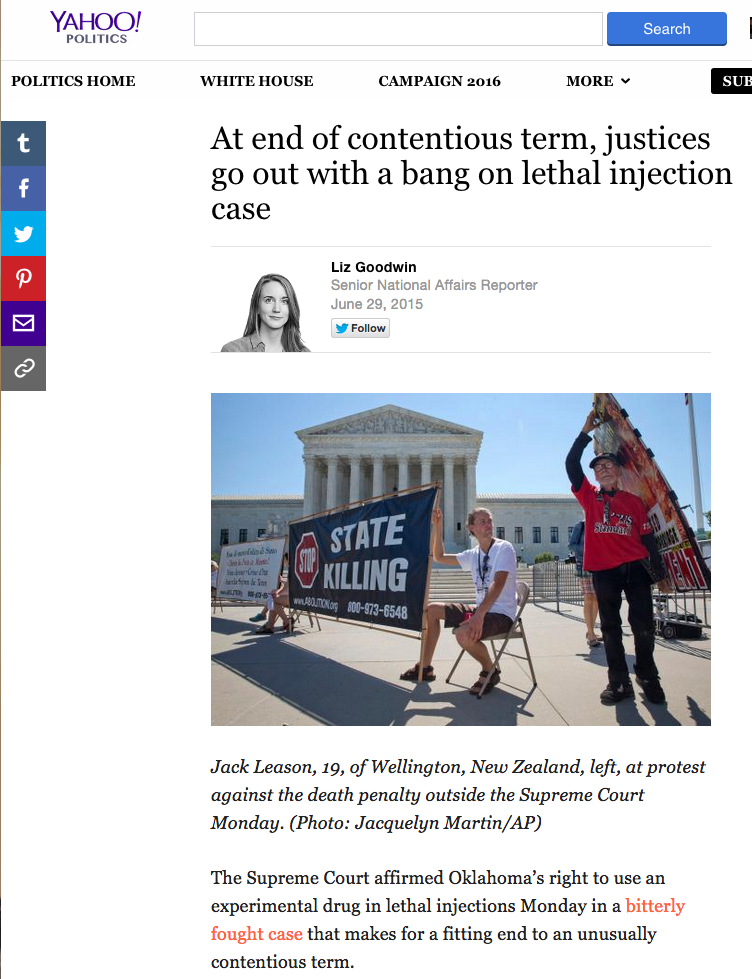 p.s. "Bob Enyart often refers to this as one of his all-time favorite and substantive interviews. We love you Ron!"
-The Staff at KGOV.com

March 2013 Update: This request is unsolicted by Ron. If you want to send a donation to Ron to help pay for new tires, gas, the occasional (or really, rather regular) mechanical upkeep, please send a check payable to Ron Brock and mail it to Denver Bible Church, PO Box 583, Arvada, CO 80001, or send the funds by PayPal to kenandjo.scott@gmail.com. Thanks! [This request is withdrawn. See In Memoriam below.]

Fighting for Terry: On the day that Florida's George Greer ruled to kill Terry Schiavo, Ron Brock was driving his truth truck in Pinellas Park. Click on the thumbnail image to see the fulll photo in the Tampa Bay Times. Their article that takes a (tragic) look back on the life-long Southern Baptist republican county judge George Greer who sentenced Terri Schiavo to be starved to death.

In Memoriam
Ron Brock went to be with the Lord September 28, 2020

* Facebook Auto-Generated this Video: Abolitionist Leslie Hanks had this video appear half-a-year after Ron went to be with the Lord. So because it features Ron in a few great photos, we tagged it kgov.com/bob-and-brock. Also appearing, Ken Scott and State Patrolmen, Connie Enyart, Scott and Debbie Evans and Secret Service (outside a Denver-area home while Mitt Romney spoke; also had a talk that day with former district attorney and Denver radio host Craig Silverman), Michael Enyart in Durango at a hospital that kills unborn children, Bob with former governor duty-to-die Dick Lamm (at a DU panel discussion), Dee Waite and Susan Sutherland, Will D., Zachary Enyart and Dominic Enyart, a whole slew of Colorado abolitionists in a Memorial Day parade with Cheryl Enyart driving a borrowed convertable sports car, John Hanks with Susan S, Larry & Ruth Carroll, Hudson Nyhart, Mike, Zach, Dom & Cheryl E. and Andy Tomko, then at Denver Bible Church Bob, Ron, Jo and Ken Scott, and CRTL president Biff Gore, then Bob & Ron. Who else in here should we list above? Just email the name to Bob@kgov.com. We all miss Ron! 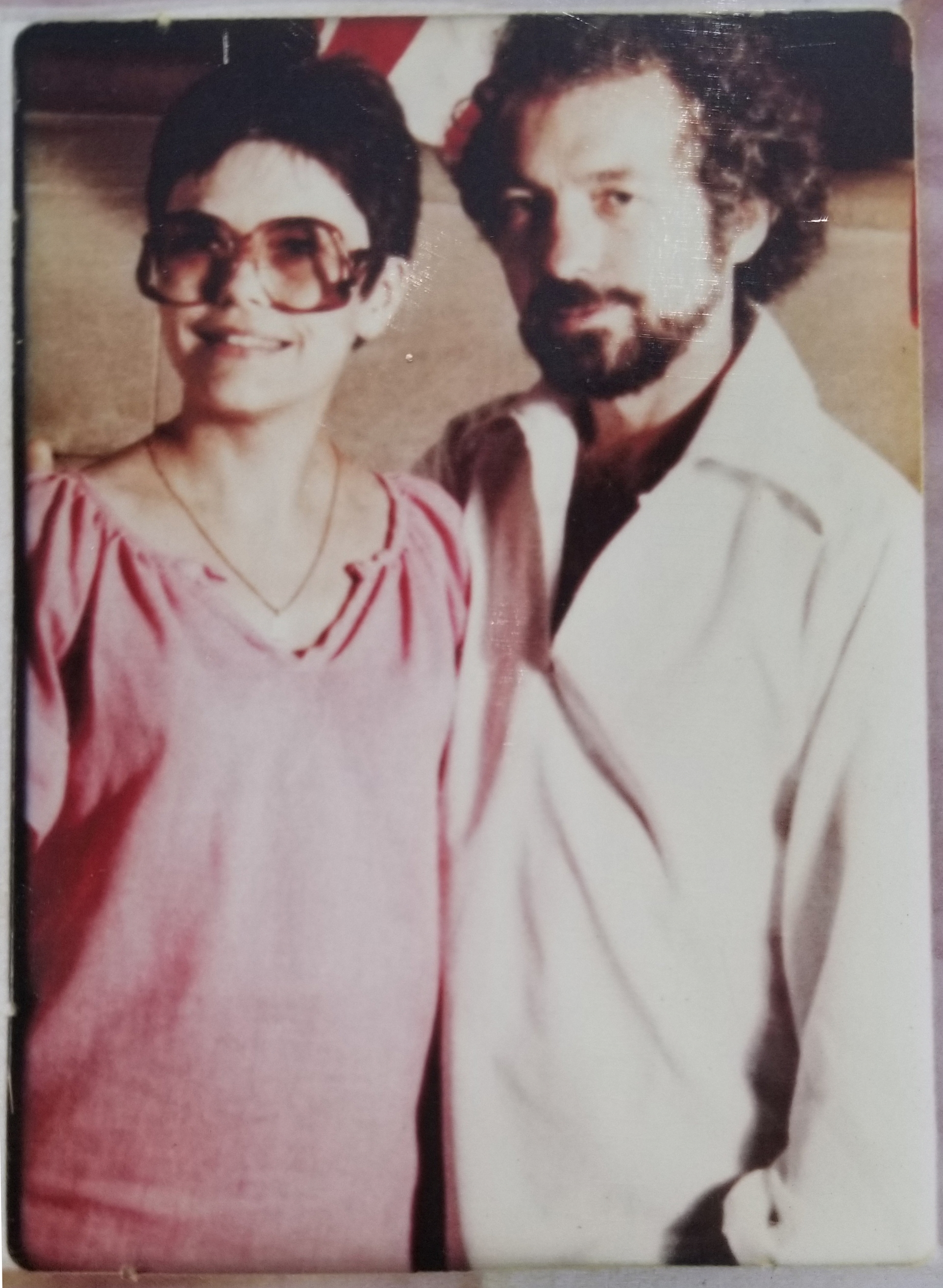 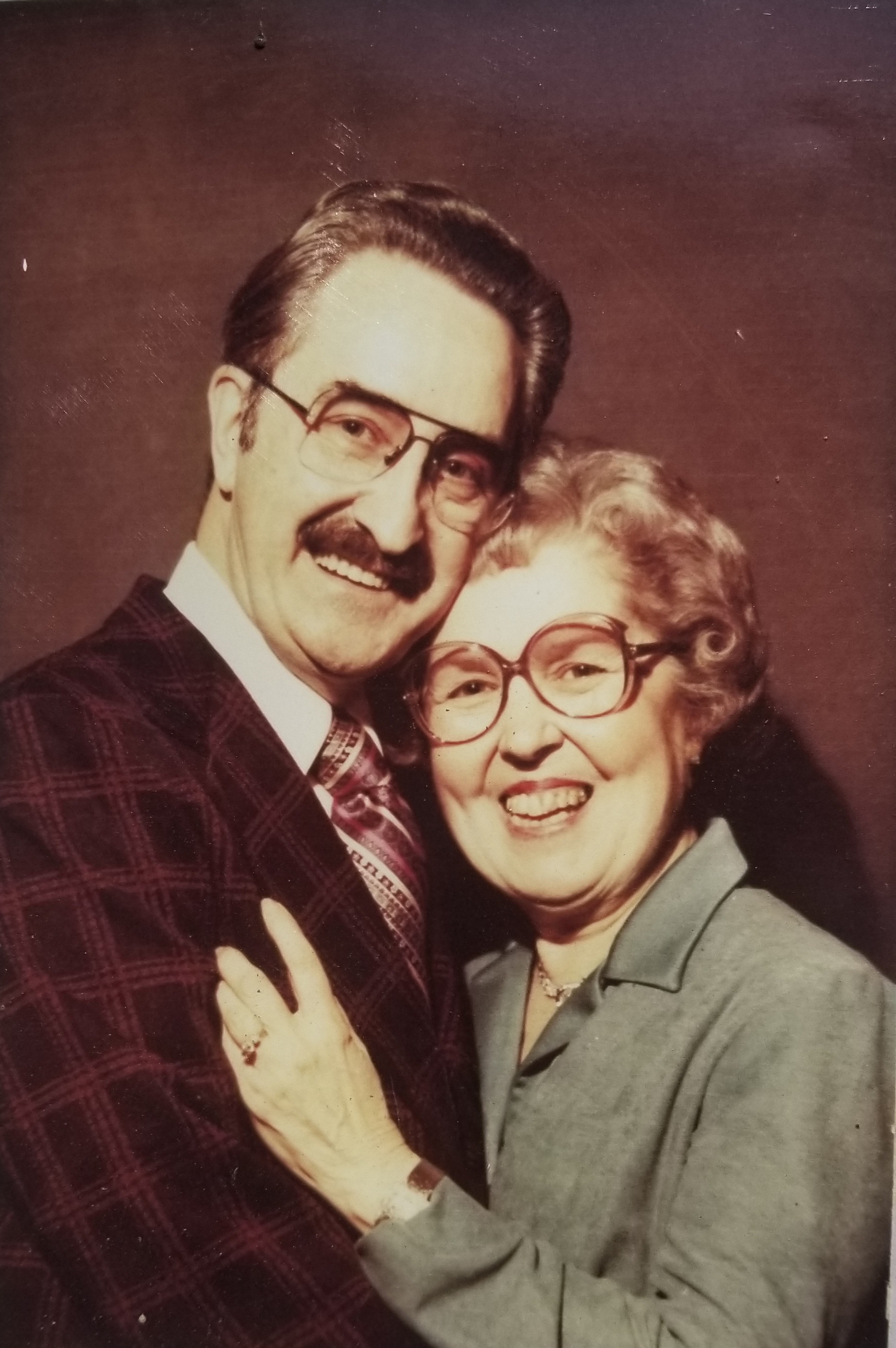 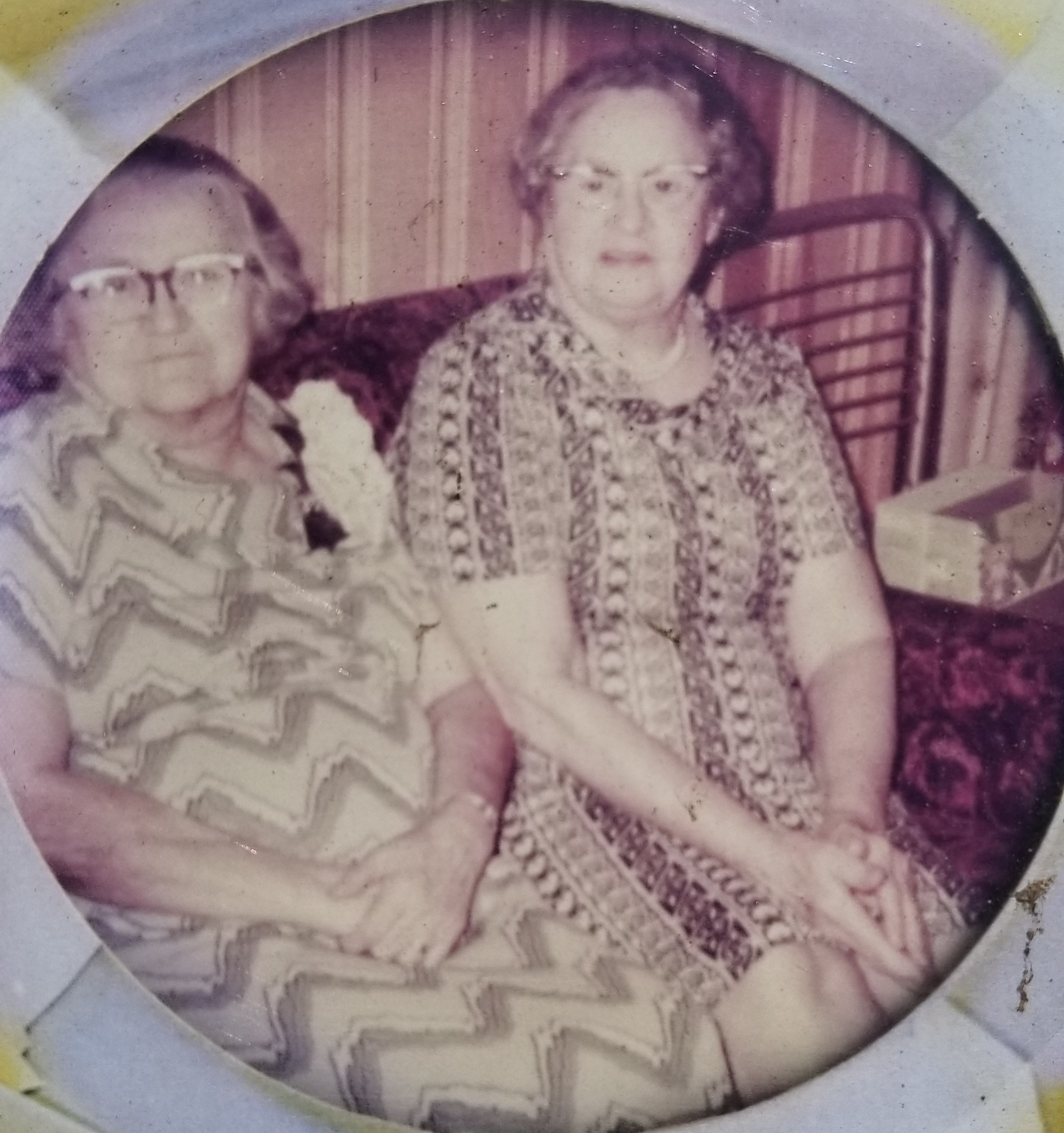