Tim Mahoney on BEL on the Origin of the Alphabet

Filmmaker Tim Mahoney of Patterns of Evidence fame on the Exodus returns to BEL to discuss his sequel, Patterns: The Moses Controvery, appearing in 900 theaters nationwide as a Fathom Event!  Get the DVDs for one or both films! For this same March 2019 weekend, Bob will be speaking in Decatur, Alabama on creation apologetics! See below for the details or at kgov.com/decatur.

Our friend rsr.org/tim-mahoney beat expectations (an incredible accomplishment!) giving the atheistic scholars their say, claiming that Moses couldn't have written Exodus (and the other books of the Pentateuch). Then he let the evidence speak! Did the alphabet begin with the Hebrews (and their aleph bet, that is, not coincidentally, the two first letters of the Hebrew alphabet)? Thanks to The Moses Controversy, the public can now see for themselves directly into what has previously been a scholars-only domain and Mahoney clearly exposes the biased-based case of the experts. From our own rsr.org/exodus-evidence. And from rsr.org/exodus-evidence:

- The Hebrews gave the word "Pharaoh" to the world: Recall first that our English word "alphabet" comes from the first two letters of the Hebrew alphabet, aleph and bet. Then think about the etymology of the word Pharaoh which looks back to the term for the palace of Egypt's king. Chilperic Edwards, one of the first scholars to translate the Code of Hammurabi, stated regarding the non-Egyptian origin of the title of their monarch: "Pharaoh was the name given by Hebrew writers to the king of Egypt." Most Egyptologists reject the historical basis for the Exodus, discounting any significant role for Abraham's descendants in Egypt. Yet language itself, one of the greatest of world treasures, is perhaps our most important historical monument. Thus, Israel's role in Egypt can be rediscovered by recognizing that the Jews gave to the world the Hebrew word Pharaoh, a word that eventually attained to common usage even by the ancient Egyptians themselves. Edwards adds, "It has been pretended that [the word Pharaoh] is a corruption of the Egyptian pa-oura... But ur, or oura, simply means a chief, or headman, and has not yet been found applied to any monarch. [N]o word, term, or title resembling Pharaoh has yet been found upon any Egyptian monument applied to any king." For more regarding the title Pharaoh being Jewish while the name Moses is Egyptian, see rsr.org/pharaoh. Also: 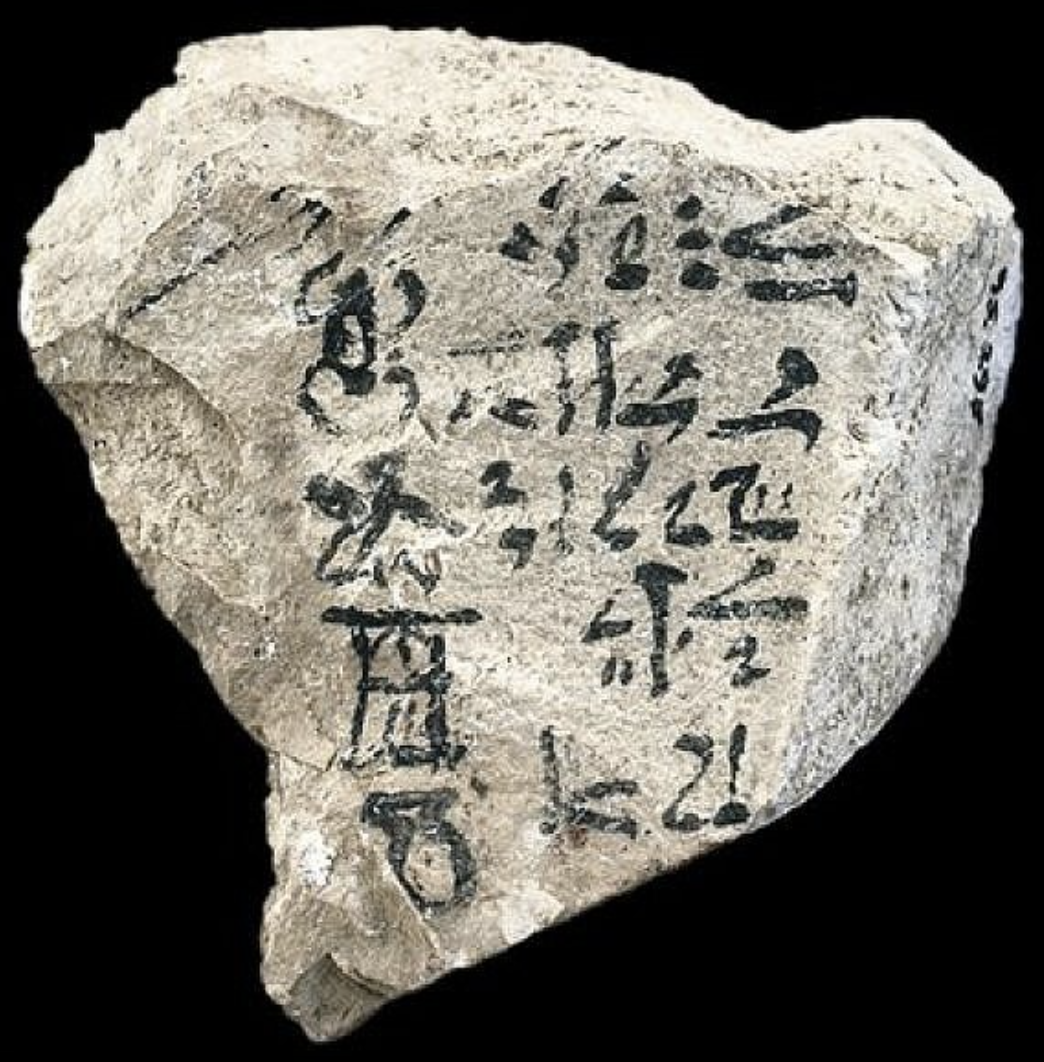 * Hebrew Alphabet Transliterated in 15th Century BC: The Cambridge Theban Tombs Project happened upon a limestone flake used as a cheet-sheet of sorts, apparently by an ancient Egyptian scribe, to remember the order of the letters of the world's first proto-consonantal alphabet.

* 600 B.C. military correspondence in Judah: As published by PNAS in 2016, researchers evaluated, "16 ink inscriptions found in the desert fortress of Arad, written ca. 600 BCE. By using novel image processing and machine learning algorithms we deduce the presence of at least six authors in this corpus. This indicates a high degree of literacy in the Judahite administrative apparatus..." Just fyi, we mention this in passing over at rsr.org/exodus#literacy. 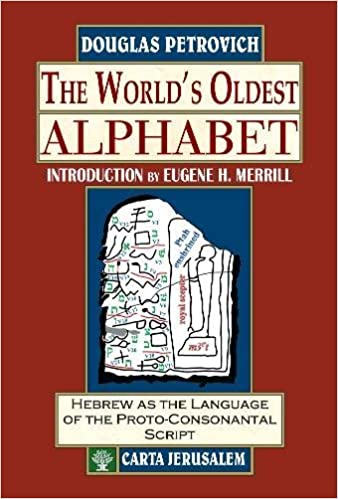 * RSR recommends this Petrovich Book: Amazon carries The World's Oldest Alphabet: Hebrew As the Language of the Proto-consonantal Script. From the books blurb, "For close to 150 years, scholars have attempted to identify the language of the world's oldest alphabetic script and to translate the inscriptions that use it, which were found in the Sinai Peninsula and date from 1842 to 1446 BCE. Until now, scholars have accomplished little more than identifying most of the pictographic letters and translating a few of the Semitic words. In The World's Oldest Alphabet, however, Douglas Petrovich presents a thorough, detailed defense of his bold new claims concerning these writings. Petrovich claims to have resolved all of the disputed letters and to have identified the language as Hebrew, which allows him to translate all of the inscriptions. Furthermore, he argues that they explicitly name three biblical figures and greatly illuminate the earliest Israelite history in a way that nothing else has, apart from the Bible."

* Shout-out to RSR for Curating List of Dinosaur Soft Tissue Papers: ICR's Acts & Facts gives a shout-out to RSR in their current March 2019 issue where Brian Thomas writes about our online spreadsheet, List of Biomaterial Fossil Papers (maintained), "Real Science Radio host Bob Enyart and I continue to curate that growing list online." Thank you Brian, Henry Morris III, and everyone at the Institute for Creation Research!

* Burning the Toast: Here's Brian Thomas' great article refuting the "Toast Model", the rescue device in the evolutionist's hopes of saving deep time from dinosaur soft tissue, published in the March 2019 issue of ICR's Acts & Facts, with RSR photoshopping Brian and an excerpt onto the truncated cover... 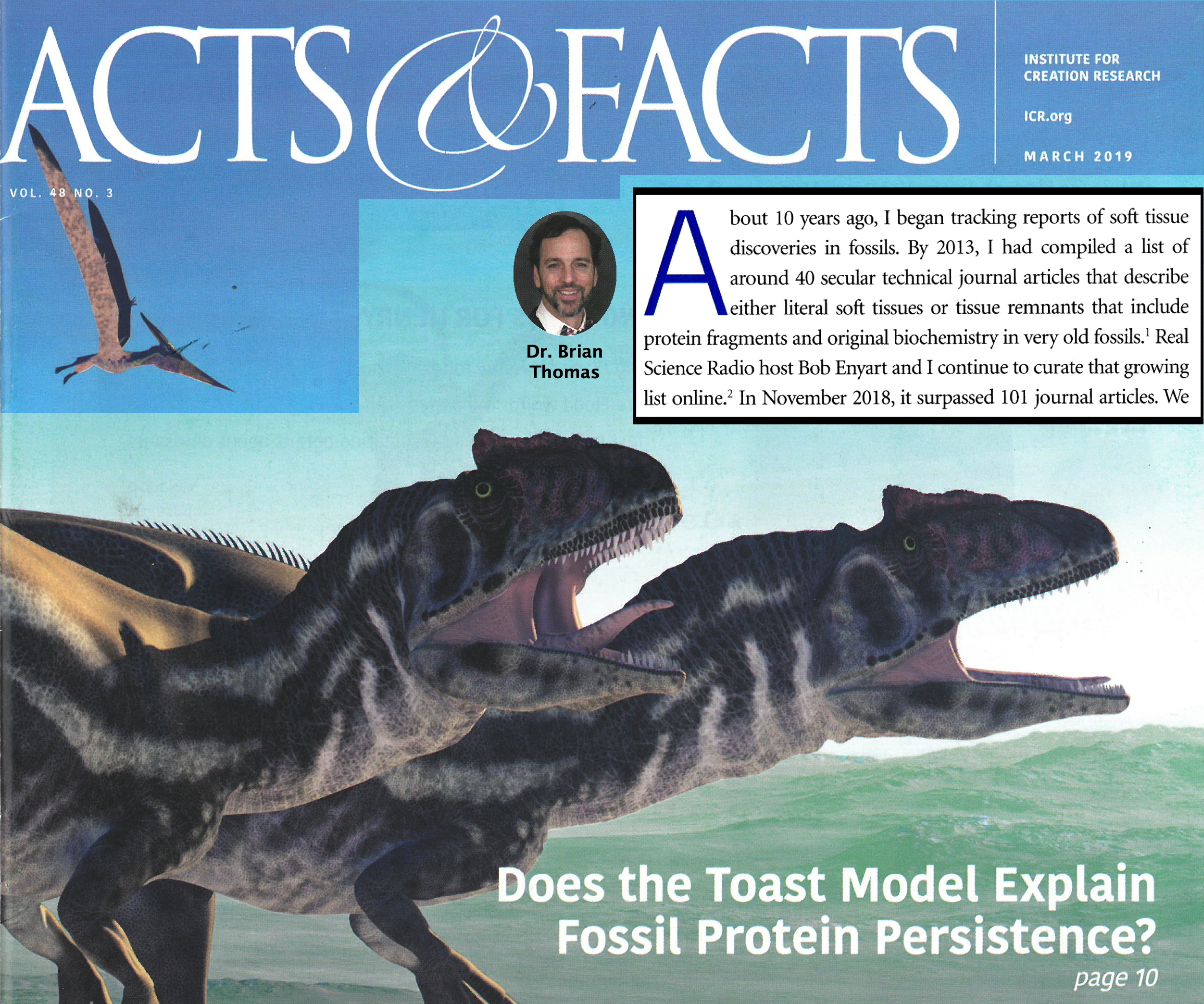 About 10 years ago, I began tracking reports of soft tissue discoveries in fossils. By 2013, I had compiled a list of around 40 secular technical journal articles that describe either literal soft tissues or tissue remnants that include protein framents and original biochemistry in [allegedly very old fossils. Real Science Radio host Bob Enyart and I continue to curate that growing list online. In November 2018, it surpassed 101 journal articles. [See that at tiny.cc/bflist.] 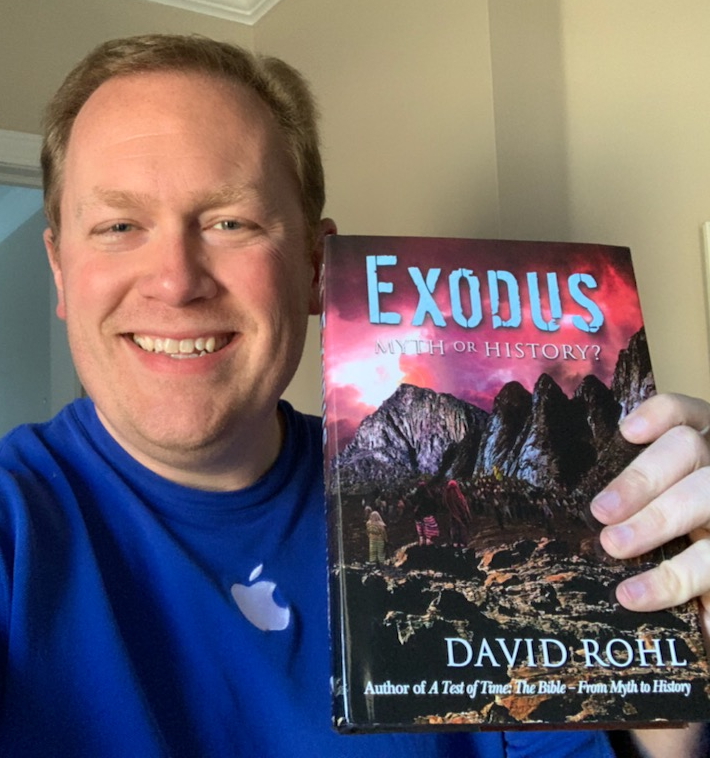 * Join Bob in Decatur Alabama for Believable! For his series on creation apologetics, Pastor Brian McLaughlin (left) of Fairview Baptist Church is bringing Bob Enyart out for a fun and educational weekend of events beginning at the movies on Thursday night!

- Thursday 6:30 PM: AMC Decatur 12 for Patterns of Evidence: The Moses Controversy (tickets; other cities) Report from Bob: "Pastor Brian McLaughlin of Decatur, Alabama and I went to the movies with some of his church familes, including Michael and Lynn Thompson's family and my wife Cheryl and our son Michael, to see Patterns of Evidence: The Moses Controversy, sequel to Patterns: The Exodus. Astoundingly, Tim Mahoney beat expectations! As defenders of the Scriptures, we’ve had plenty of evidence, physical, historical, and otherwise, for major biblical events including the creation, the Fall, and the resurrection of Christ. Though God's Word of course is beyond sufficient, the Epistle to the Hebrews teaches us that faith is the proper response to the "evidence for things not seen." Yet for one of the most dramatic historical events though, the Exodus, we've always had precious little evidence outside of the Scriptures. And God does point to the evidence. Look at the stars. Look at the creation. Look at the prophecies. Now, look at the evidence for the Exodus! And find out when the first alphabet was invented, where, and by whom! It turns out that yes, Moses could have written Genesis, Exodus, Numbers, Leviticus, Numbers, and Deuteronomy, because he had the tools at his disposal, the 22 letters of the Hebrew alphabet! Thanks Tim Mahoney for these powerful films!"

- Friday 10:00 AM Madison Academy high school presentation to combined classes and the former principle. What a great time was had, and fabulous questions!