* Updated May 10, 2019: In June 2018 for the first time Bob Enyart has gained direct access to and held in his hands Steve Austin's 1988 Grand Canyon tour guidebook and Austin's obviously doctored and back-dated 1989 guidebook by which (see below) he falsely claimed priority. When Dr. Brown received the following letter from Dr. Austin, thankfully, he was in possession of Austin's 1988 text. (This was the spiral-bound book for the participants on his annual Grand Canyon rafting trips.) This 1988 book proves that Dr. Steve Austin lied in the letter just below and it explains why at the end of their day of mediation that the Pepperdine University mediation board found in favor of Dr. Brown. Steve then signed the mediation agreement but later refused to comply with the mediator’s findings and that agreement. Instead, like a lawyer might do, he then spent months wearing down the lead mediator (in the manner of Luke 18:5) and Steve has since spent years obfuscating. None of that though changes the fact of Steve’s lie in this letter and that he therefore has lost the benefit of the doubt. (Today, in 2019, he has dropped his initial (false) claim to priority and has come up with another, which can be equally proved false.) The last paragraph shown here is proved to be a complete lie: 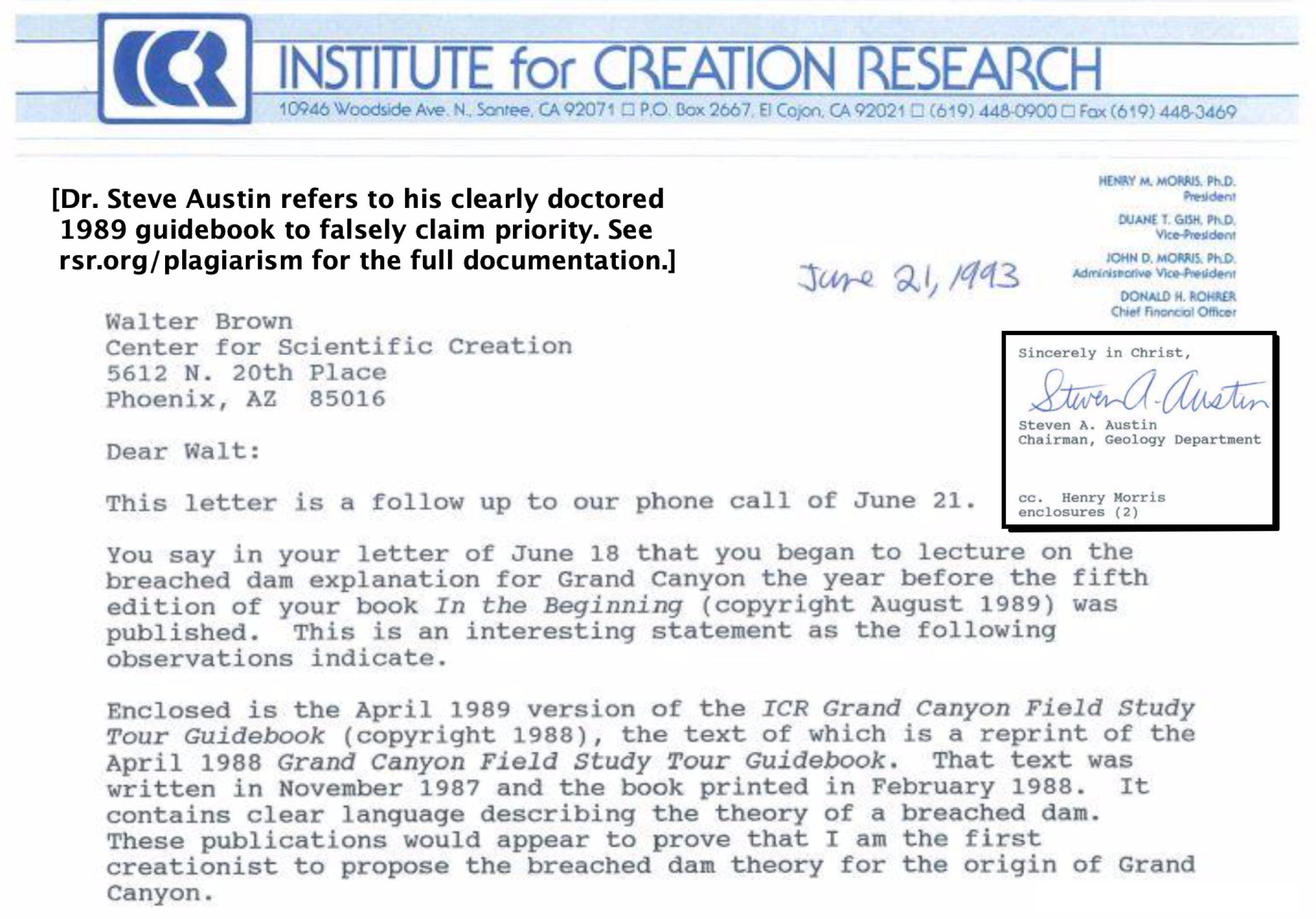 * Austin Deceptively Removed these Four Paragraphs: In RSR's scans from Austin's guidebooks, first note the four paragraphs that Steve Austin removed to squeeze in a map without renumbering the rest of the book so he could fraudulently claim that the map was always there (click to enlarge): 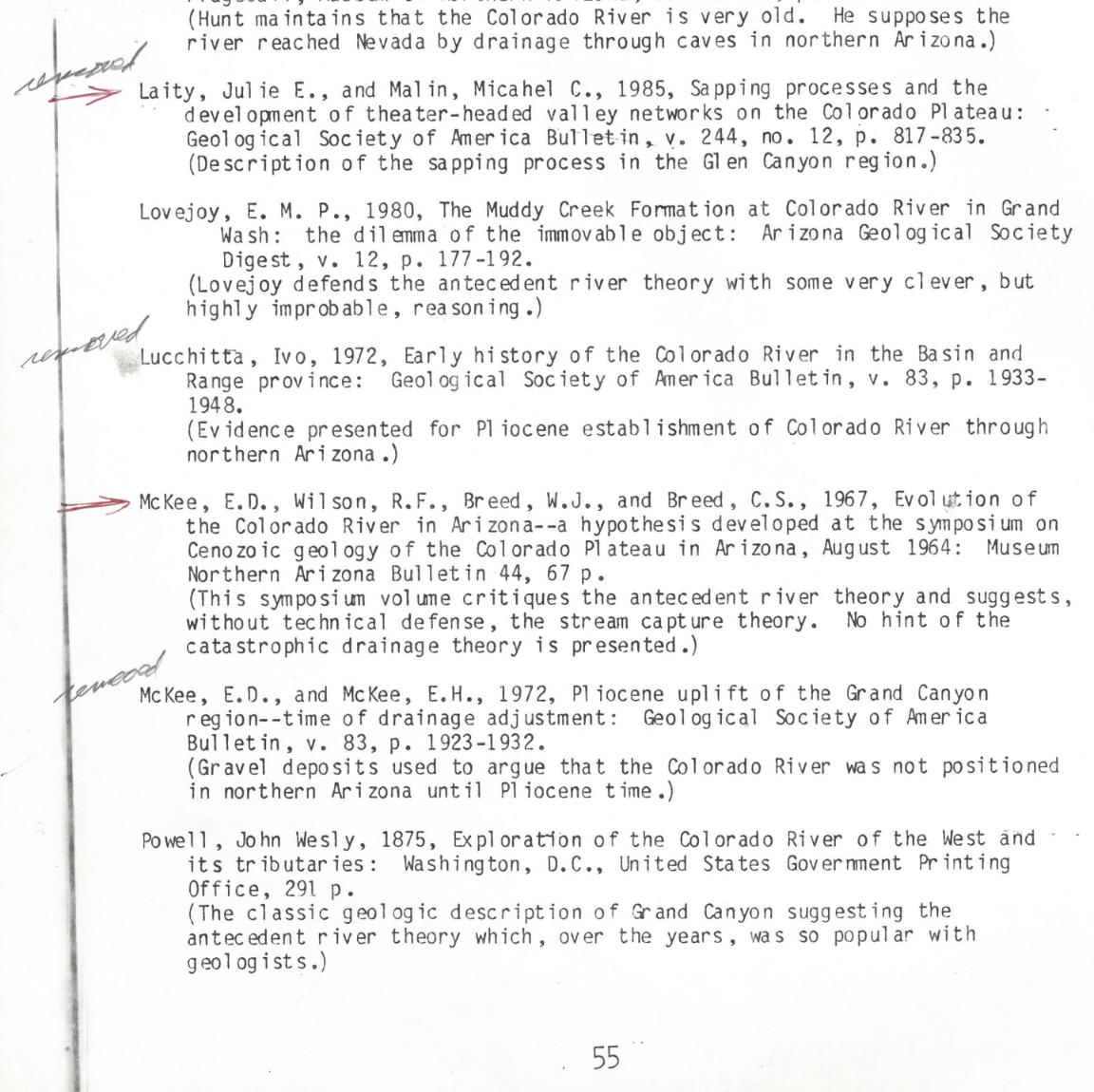 Now see the map page that does not exist in his 1988 book that Steve Austin later inserted, claiming to Walt Brown, Henry Morris, etc., that this proved his priority over Dr. Brown regarding Grand Canyon discoveries (click to enlarge): 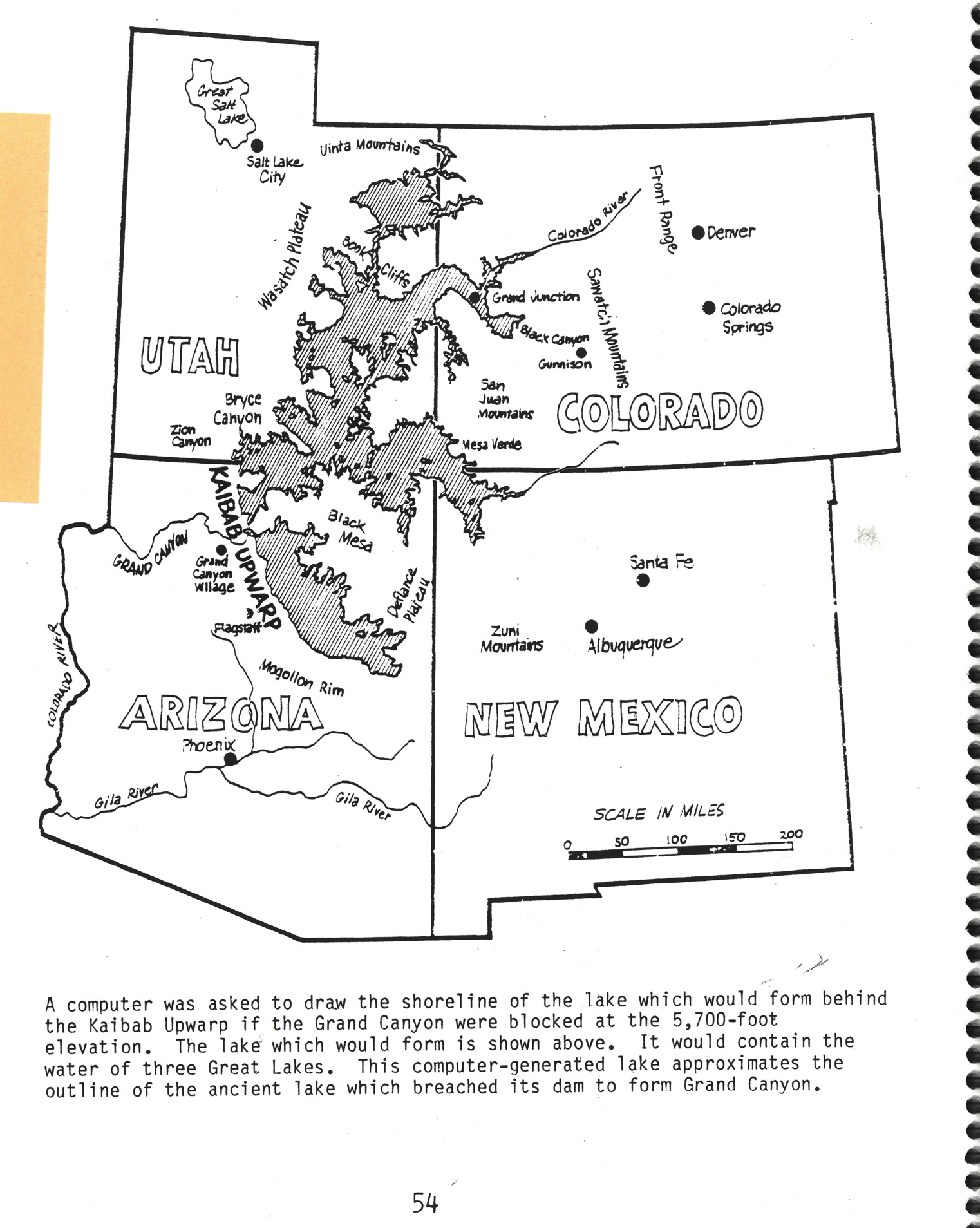 Steve shortened his reference section (note the four missing  paragraphs) to free up a page to insert a map that he falsely claimed had been in the previous year's text: 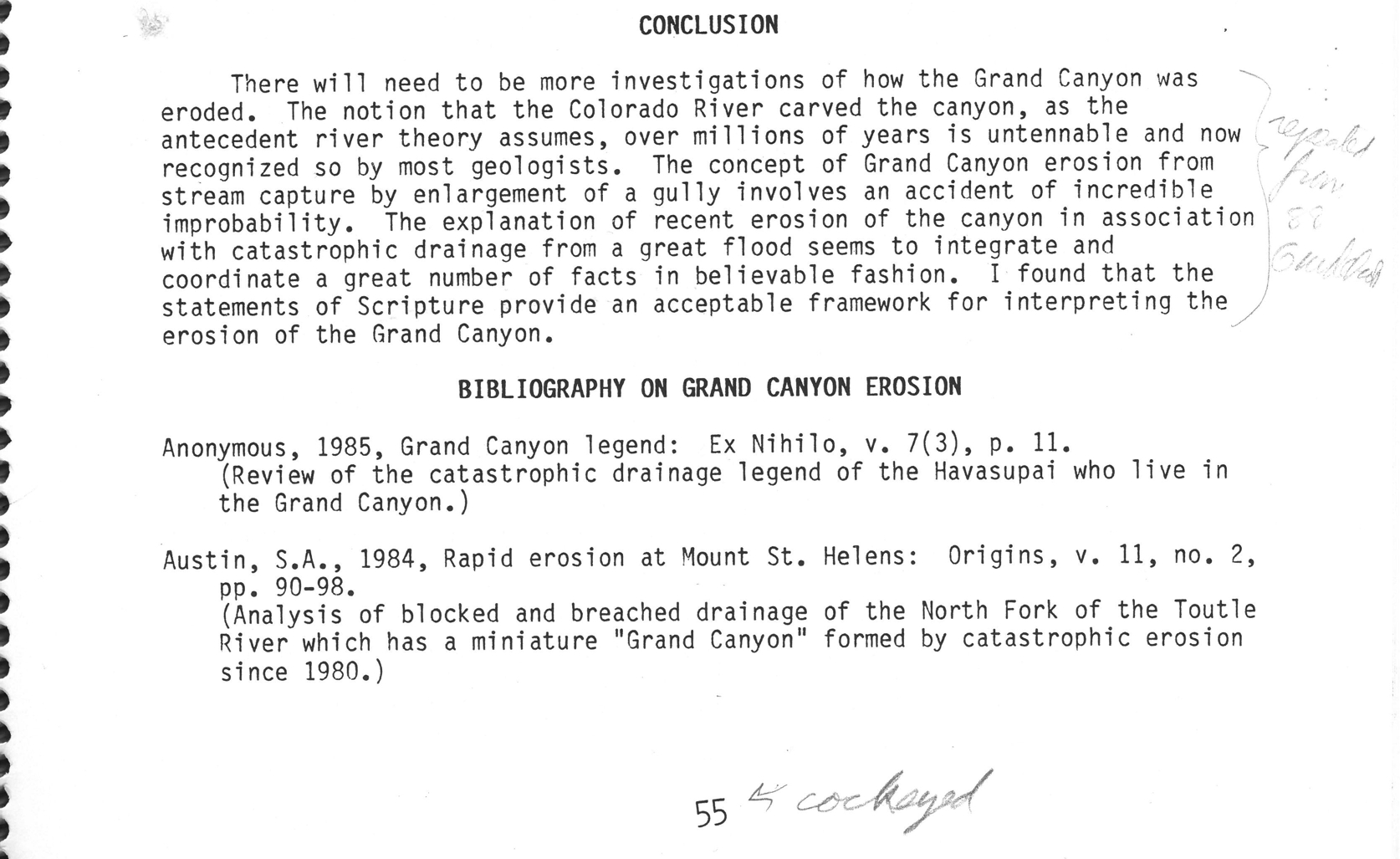 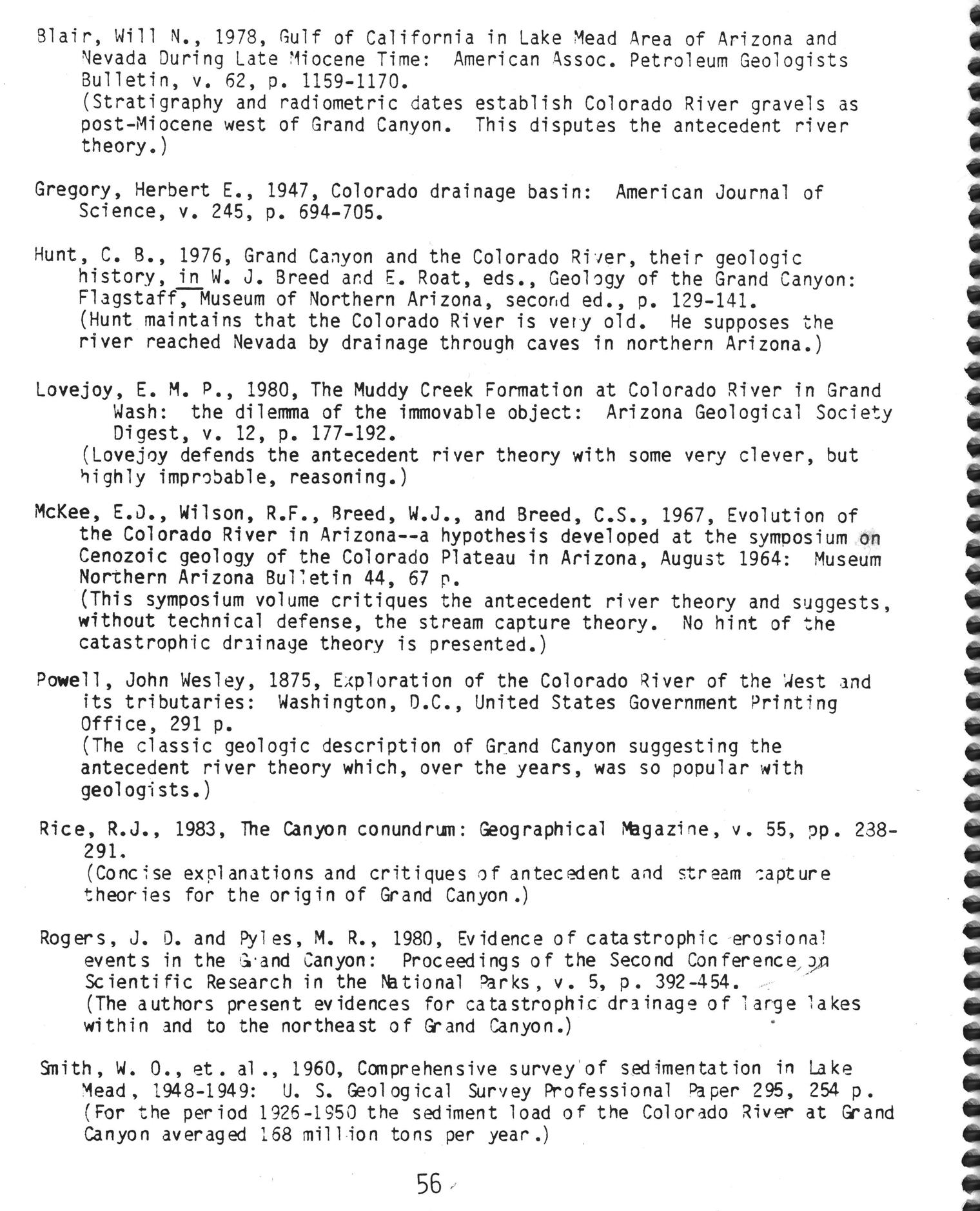 Now we present Steve Austin's 1988 and 1989 and 1990 guidebooks. Of course RSR would never normally publish the full or nearly full texts of copyrighted material. However in this case, these documents were fraudulently used to claim priority. 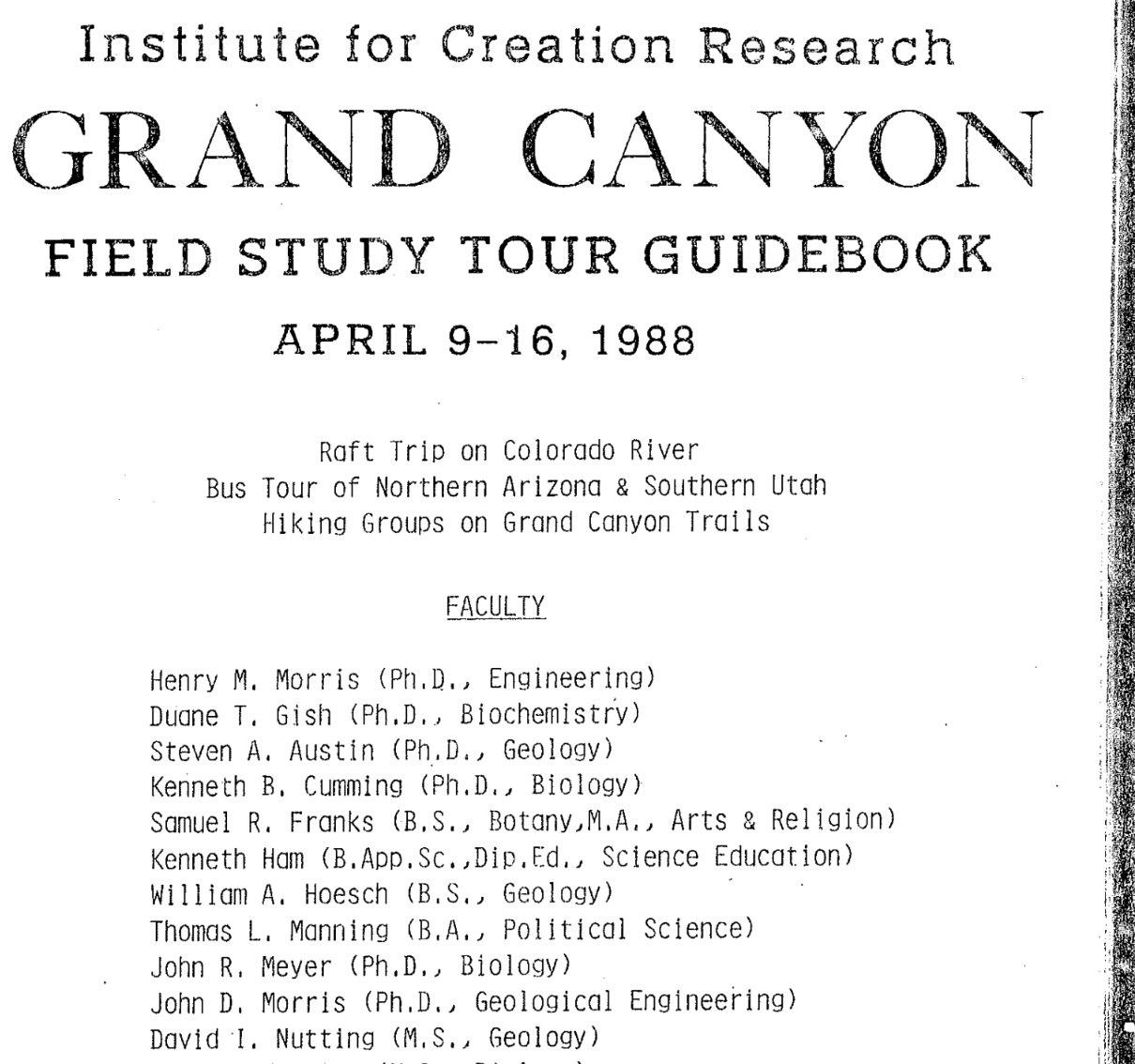 In his surreptitiously updated 1989 book, Dr. Austin deceptively included a 1988 copyright and he later argued that this was a true copyright. (See his letter, above.) An actual 1989 copyright would not support his claim. On ICR letterhead, Steve lied to the president of ICR, Dr. Henry Morris, and to Dr. Walt Brown, the scientist he plagiarized. (Steve's approach reads like, but hopefully won't succeed like, Edwin Hubble's deliberate theft of George Lemaitre's "Hubble Law".) When Austin argued that this (doctored) text was his priority claim, he didn’t know that Walt had a copy of the 1988 guidebook which did not include that map. This proved Steve’s June 21, 1993 claim was a lie. His 1988 book did not have the page he later inserted. Yet that claim formed his Exhibit A against Dr. Brown.

Minor observation of the fraud: Where Steve updated his text, he ended up creating cockeyed page numbers. In his 1989 text, see p. 69 from when he inserted a later reference. And see p. 189 from his update to that year’s fieldtrip. Dr. Austin also then numbered page 55 crookedly after removing those four paragraphs (marked above) to squeeze the map onto page 54.

Lake Elevation: In the caption, Dr. Austin changed the elevation used to draw the map to Walt's elevation. (Dr. Ed Holroyd, Steve's associate and longtime RSR friend, produced the map.) Steve changed Holroyd’s 5577-foot elevation to Dr. Brown’s 5700 feet. The caption then presents his book's only brief statement that this lake carved the canyon. There’s not a word to that effect elsewhere in the rest of the lengthy book. We know that Job predated Moses (because there’s not a word there of that covenant, the Sabbath law, etc.). Likewise we know that the map was not a part of Steve’s 1988 book because it would be inexplicable to have what you believe is the explanation for the Canyon and relegate the specifics to just a single caption.

Mediation Details: Walt Brown wrote his gracious June 18, 1993 letter (below) to Drs. Austin and Morris to which Steve replied with the proven lie (above). As a result, after several exchanged letters in which Austin dug in his heels, Dr. Brown asked for an audio-recorded binding Christian arbitration with a neutral party. Through correspondence ICR agreed to Walt's request and arranged for a mediator whom, it became known, was an ICR supporter. Thus, neutral party David Coppedge (former NASA/JPL Saturn mission ground systems administrator and longtime RSR friend) was asked to select a Christian arbitration service and he chose Pepperdine's. About 48 hours before the event, ICR informed Dr. Brown that they would not attend if it were binding arbitration but only if it were downgraded to mediation. This, and learning at the start of the day that no audio recording was to be made, discouraged Walt. Far worse, in the years since, many with the leading creation groups including John Baumgardner (just recently rsr.org/retracted) and CRS president Don DeYoung (not yet retracted) have slandered Dr. Brown accusing that he threatened to sue Henry Morris and ICR (in violation of Scripture), "So why even read his work (seeing how unethical he is)?"

Wearing Down the Lead Mediator: Henry Morris, Steve Austin, and Walt Brown attended the mediation at Pepperdine University before a board of judges and a secretary. By Walt's contemporaneously written notes and recollection, as the board examined the above material, when it became obvious that Steve lied, there was a prolonged embarrasing silence. By the end of the day, the board asked, in front of Henry Morris, if Steve had any evidence whatsoever of his claimed priority. He went out to his car and came back with a map of Hopi Lake that everyone viewed as irrelevant.

[In April 2019, Dr. Austin submitted for publication to Answers in Genesis a Grand Canyon paper that claims priority with his evidence that, at the ICR headquarters he had "posted in 1987" on a "bulletin-board" the map in question. If this were true, at the mediation he could have appealed to ICR's founder Henry Morris, sitting right there, for corroboration. Instead, he had only produced an irrelevant Hopi Lake map.]

The Mediation Board Found for Walt Brown: Steve Austin signed the agreement which instructed him to insert an "errata" sheet into the unsold copies of his 1994 Grand Canyon: Monument to Catastrophe. Heading into mediation and to publish his big "Monument" work, Steve merely changed the name of Walt's lake to "Canyonlands Lake". So in the correction the mediation board required him to revert to using Walt's name, Grand Lake, but this time giving Walt credit. (That book is still available but not in the U.S.) What Steve had originally plagiarized (see especially his 1990 guidebook) was not the long-published general idea that perhaps an ancient lake (Hopi?) breached and carved the canyon. Rather, he took specifics including what Walt discovered (with help in the field from Wheaton College geology professor Dr. Doug Block) that the primary lake that carved the canyon was not Hopi Lake (a generally-agreed unworkable hypothesis). Rather, a much greater lake had actually existed (something Holroyd himself doubted) at the elevation of 5700 feet. Then, even though a "Grand Lake" already existed in Colorado, after much thought Walt named the 5700-foot lake he had discovered Grand Lake. Steve had previously knowingly taken that name, that elevation, and other particulars. (See the documentation below.)

How did Dr. Austin wear down the mediator and the truth? Austin spent months actively defying the agreement that he signed. For example, in a saga itself terribly embarrasing to Steve (see our June 2018 reporting just below), he spent months lying about the inventory of his Monument books at ICR. Secondly, he obfuscated in writing by telling the lead mediator that when he signed the agreement, he didn't realize that they had no authority to name a U.S. geographic feature (this is utterly irrelevant!) and so they had no authority to instruct him to resume using the discoverer's name for the lake, this time with proper credit of course. Of course if Steve Austin fulfilled the promise he made by signing the agreement, then Wheaton's Dr. Block and the many others who heard Steve Austin claim that Walt Brown was plagiarising him would then explicitly know that the truth was the reverse. As a result, at the Answers in Genesis Creation Museum, and everywhere creationists display "Canyonlands Lake", Steve Austin's fraud is being accepted and perpetuated.


RSR's June 2018 In Depth Reporting on the Austin Fraud

On air during our RSR's Grand Canyon series, Bob Enyart discussed the above account and many more details along with the following documents. You can hear that at rsr.org/gc4. (Also at 17 minutes into RSR's flood video, you can see how ICR's founder Dr. Henry Morris introduced Walt Brown and then at the end of his career you can hear how Dr. Morris honored Walt.)

Kevin Lea of Calvary Church of Port Orchard wrote a report (linked to below) regarding the "Grand Lake" mediation controversy conducted by Pepperdine University's School of Law. In his report (which is part three of a series with earlier parts not addressing this mediation) Pastor Lea links to the original documentation. The mediation was intended to resolve the accusations of plagiarism being leveled at Dr. Walt Brown regarding Brown's own discovery of where a former lake once sat. He named that body Grand Lake (which contained a volume of water greater than Lake Michigan), discovered its 5700-foot elevation, and the breach point where it spilled over its southern boundary and then carved out the Grand Canyon.

For example, from the report's Attachment 1: 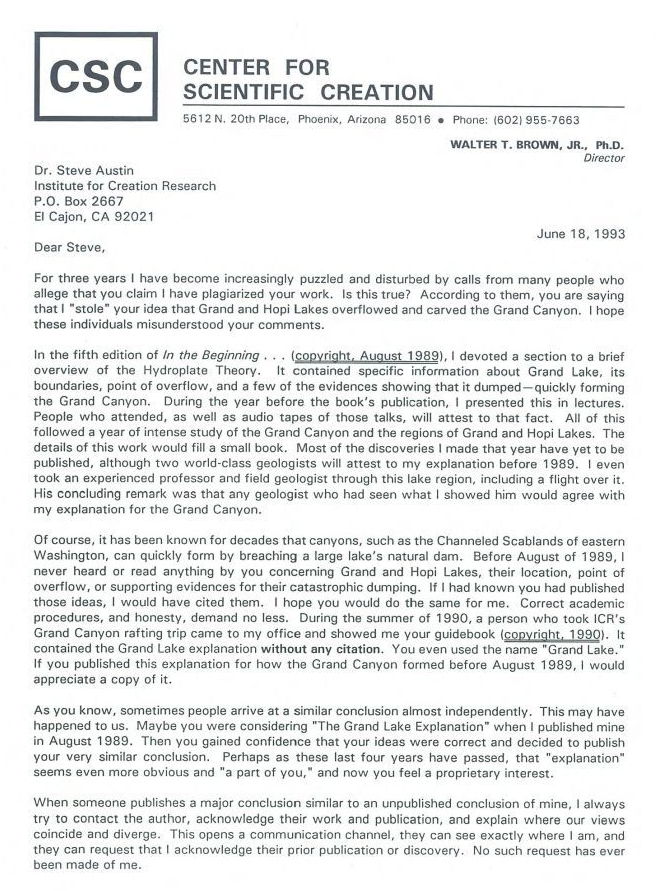 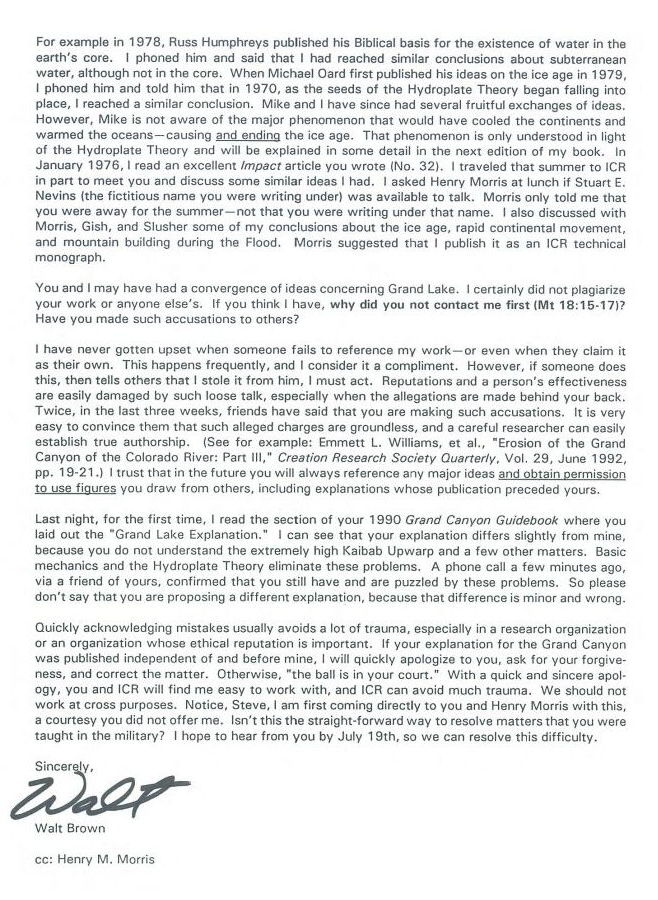 We plan to extract additional items (such as the letter above) from within Kevin's report and display them on this page for easier access.