CARM's Historic Concession to Openness: "God is not outside of time"

See the May 2018 press release on this at Christian Newswire!

Today's program begins with brief news updates on marijuana causing cyclic vomiting syndrome and the U.S. recognition of Jerusalem as being in the best interest of the Palestinians. Bob Enyart the airs a single question from the Q&A session (at 2:10:30) of Will Duffy's debate with Calvinist Matt Slick on open theism. Popular Calvinist theologian Matt Slick makes a historic concession to open theism with his statement: I don't say that God is outside of time. Nor that God exists in an eternal now." Wow! Also, you're invited to join the thousands who have already viewed this Open Theism debate on YouTube vs. Calvinist Matt Slick. (Related: When asked the opentheism.org/aseity question, Matt's reply, which seemed a grasping at straws, included his claim, which of course would refute his reformed theology, that God doesn't require omniscience to be God.) 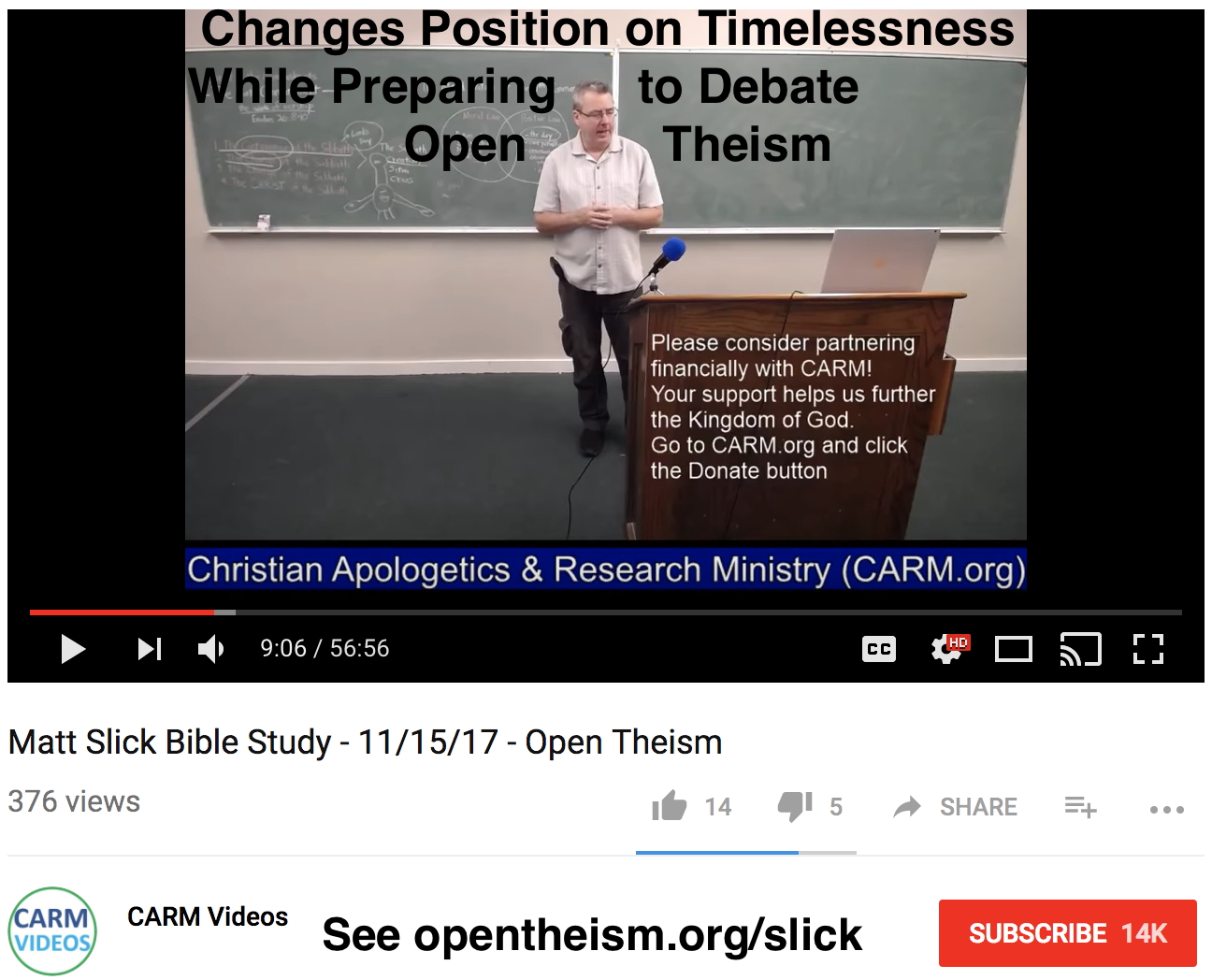 Major Turnaround: CARM's Matt Slick Concedes On God Not Being Outside Of Time

In the two weeks before his debate with Will Duffy (between Nov. 15 and Dec. 1, 2017) Matt Slick made a major turnaround in his Calvinism and a huge concession to open theism. As a popular theologian, he now rejects the position he has held for decades, namely, the settled-view belief that God exists outside of time.

That is a major turnaround for this popular Calvinist. A Dec. 27, 2017 Google search of his CARM website shows that the phrase “outside of time” appears 44 times on Matt's site including in articles that he has written, updated, or posted recently. For example:

carm.org/how-can-jesus-pay-for-all-our-sins-past-present-future by Matt Slick, dated May 31, 2016: “Since God is outside of time...”

carm.org/did-god-create-himself by Matt Slick: “...we do not relate to God in His time frame... He exists outside of our time reference. He exists [present tense]... before He created [the universe]. Therefore, the issue of eternity, which deals with time, does not apply to God because God is outside of time.” Contrary to such philosophy, the Bible repeatedly applies eternity to God. See kgov.com/time#everlasting. Matt goes on to wrongly argue that God cannot cross an infinite amount of time. This is false because He has and we demonstrate that at kgov.com/time#crossing-infinity. Also, consulting archive.org it appears that this article also was written or at least posted online in 2016, and not 22 years ago as Matt had stated in the debate.

Why Did Slick Misstate When He Changed His View? Matt misstated the timing of when he changed his view to obscure the historic significance of his paradigm shift. If it had been decades prior to this debate when he rejected the belief that God was outside of time, then he could argue that adopting this new view, dramatic as it is, had nothing to do with the persuasiveness of open theism. However, he changed his position while he was watching and reading Will Duffy's and Bob Enyart's open theism debates during his two weeks of preparation to meet Mr. Duffy. It would have been a beautiful display of humility (and still would be) for Matt Slick to say, "I had always taught that God exists outside of time, but these open theists have encouraged me to reconsider that doctrine in light of the Incarnation, and I've realized that, at least on this point, they must be correct. God cannot exist outside of time."

carm.org/logical-refutation-open-theism by Matt Slick and first appears at archive.org in 2011: “Time exists… as a relationship to things that change” and Matt claims that God is utterly immutable, that is, that He does not change. Thus by his description, God would be outside of time. Matt continued, “God is not restricted by nor contained within time, nor is He restricted by a continuous succession of events from the past, through the present, and into the future, nor is time an attribute of God's nature. …  time is not a part of God and God is not restricted by time. … we can see that God cannot be restricted by time and is outside of it.” In the debate with Mr. Duffy, Slick also conceded to open theism that God acts in sequence. Yet in this article, he wrote, though it is a non-sequitur, “If we stated that God exists relative to time, then God exists as a sequence of events”. He thereby concludes again that God must not exist relative to time. (But see kgov.com/time.) Matt also presents a false definition: “time is a sequence of events”. And then he writes, though the sentence contradicts itself, “God has always existed and continues to exist outside of time…" He concludes then, wrongly, "past, present, and future… are irrelevant to God's nature and existence since He exists outside of time.”

carm.org/if-god-knows-our-free-will-choices-do-we-still-have-free-will by Matt Slick, [this article first appears on archive.org in 2010]: “God has no beginning, and since ‘beginning’ deals with an event in time, God is outside of time.”

carm.org/does-god-have-body by Matt Slick [this article first appearing on archive.org in 2009]: “Since God is outside of time, eternal, He could not be material.”

carm.org/evolutionist-says-evolution-fact by Matt Slick “God is outside of time”

carm.org/did-jesus-know-the-future by Matt Slick “Being God... and because He is outside of time...”

carm.org/false-prophecies-of-joseph-smith by Matt Slick: “This is because God, who is outside of time... makes no mistakes...”

Also, at CARM, dozens of blog posts by his supporters claim, unchallenged and with obvious agreement from Matt, that God is “outside of time”.

Eternal Now: There are fewer instances on his site for the phrase "eternal now" but one of those in an article carm.org/atone-past-present-future by Brad Huston, “God, who is infinite, exists in the eternal ‘now'” which claim, of course, by Matt's newfound understanding and by the Scriptures, is false.

Calvinist Theologian: "I Don't Say God is Outside of Time": Hear that in these 10 seconds...

But That Was "Heresy" Just Two Weeks Earlier: On November 15, 2017, in these 20 seconds, Matt Slick was still describing as heresy what then became his new understanding...

Trying to Play Down the Historic Concession To Open Theism: From the Q&A session, Matt Slick tries to play down the significance of changing to his new understanding when answering Bob Enyart's question...

In conclusion, Calvinists and Arminians should realize that their settled view doctrine is ultimately based upon Plato's philosophy. The pagan Greeks held that God must be outside of time because anything perfect cannot change yet and if God were in time He could have a new thought and that would break Him, so the future must be settled. (This was all public relations and marketing for his Platonic Academy. Their superstitious culture believed in Fate, which pagans also called Providence. So to get public support for his school, Plato provided a false but intellectual-sounding defense of their superstition.) However, the perfect baby Jesus changed in countless ways and a perfect acorn becomes an oak tree. An imperfect acorn may never change as also a stone idol is immutable. (It's also impassible and impeccable, but those are quantitative attributes for another time.) God could not humble Himself if He were unable to change in any way, nor could God the Son become flesh and thereby take upon Himself a second (human) nature. So as Matt Slick gives up the atemporality of Plato, Aristotle, Plotinus, Augustine, Boethius, Aquinas, Luther, and Calvin, he simply hasn't yet realized that thereby, the entire edifice of the Arminian and Calvinist settled future crumbles and burns. However, as those ashes blow away they reveal the beauty of God, eternally free.

Matt Teaches on Potter & Clay; Then Tells Will He's Unfamiliar with the Passage: Before the debate, in the same video teaching presented above, Matt Slick discusses Jeremiah 18 and one of the top ten most well-known concepts presented by Calvinists, the Potter and the Clay. When Will Duffy challenges Calvinism with the Jeremiah 18 passage. (The potter, that is, God, did not finish making the first vessel, as He had intended. But rather, because "the clay was marred in His hand", He made it into another vessel, for dishonor, instead of making it/them into a vessel for honor, as He had begun to do and initially intended to do. Instead, "He made it into another vessel.") When Will asked Matt about the Jeremiah 18 passage, Matt said, repeatedly and increasingly forcefully, in a way designed to shut down discussion of that scripture, that he was unfamiliar with that passage, which was a lie, and that therefore, he could not discuss it.

This planned deception was one of the various debate tactics that Matt used that have earned him his last name, that exposed Calvinism's scriptural weakness, and that dishonor the Lord.

Click on this image for the full press release: 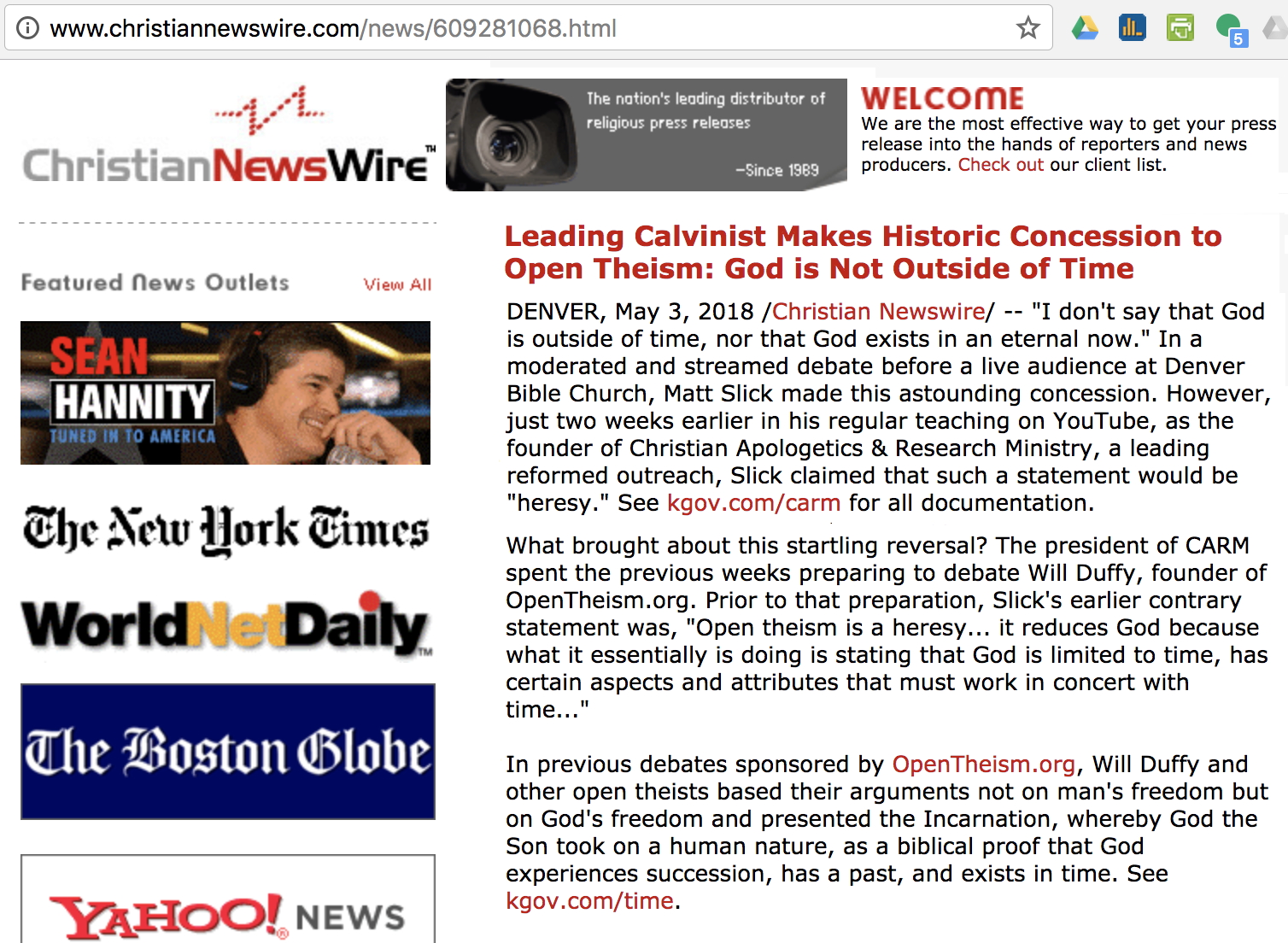