Fred Williams and Pete Fiske on the Flat Earth Movement

Please check out our 2018 Kickstarter project that raised $34,000: Launch a flat-earther into space!)

* Paranoia Explains Today's Flat Earth Syndrome: Ten percent of Frenchmen (and women) believe that the Earth may be flat. This modern phenomenon reveals not a scientific hypothesis but a slow-growing symptom of distrust and paranoia caused by widespread fake news and other environmental factors. In the U.S., 34% of Americans 18 to 24 years old are unsure about whether the world is a sphere, with three million of that group claiming the world is flat. (The percent of the population convinced the world is round gradually approaches 95% as ages increase to over 55.) Despite having access to more information than any time in history, an alarming number of people are falling into the trap of believing the myth of a flat earth. Many of these are Christians who unwittingly play into the hands of atheists who have long ridiculed the Bible as teaching a flat earth (its ironic that the president of the Flat Earth Society is, in fact, an evolutionist!)  Real Science Radio co-host Fred Williams and special guest Pete Fiske talk through the enormous evidence against a flat earth, and how believing this myth is, in fact, a direct attack and insult to the Book of Genesis. The truth is, scientists and Bible scholars have held for centuries that the earth is a sphere. Among these scholars is the prophet Isaiah, who wrote that God "sits above the circle of the earth" (Isaiah 40:22), using a Hebrew word that means both circle and sphere.

* Flat Earth, Geocentrism, and the Moon Landing Hoax: LiveScience reporter Natalie Wolchover offered to Shenton a NASA image of our western hemisphere which should lead the Darwinist flat-earthers to wonder where Europe, Africa, and Asia were hiding. And by the way, those who still claim that the sun orbits the earth have far more supporters than do the flat-earthers. For a rebuttal to that view, see rsr.org/geocentrism-rebuttal. And for a rebuttal to the moon landing hoax conspiracy claim, please see rsr.org/moon-landing-hoax-refuted.

* UC History Prof. Debunks Myth of the Flat Earth: Dr. Jeffrey Russell, Professor of History at the University of California, Santa Barbara, has also taught history and religious studies at Berkeley, Harvard, and Notre Dame. His book, Inventing the Flat Earth, documents that in the 19th century a French archaeologist and an American essayist invented and spread the falsehood that educated people in the Middle Ages believed that the earth was flat. RSR notes that the anti-Christians spreading this fabrication allegedly include some of Darwin's promoters like David White, and that the targets of this smear included Christian scholars. Prejudice and myth die hard, and a small army of professional historians have been unable to correct this evolutionist libel against Christians. Toward that end, however, see Dr. Russell's brief article, The Myth of the Flat Earth. Russell there mentions the widespread false belief that in 1491 Christopher Columbus faced inquisitors and theologians who held that the Earth was flat, which mini-myth has been widely debunked and identified as a pure invention of the author Washington Irving.

* Isaiah: God "sits above the circle of the earth": From above, and from every direction, a solid sphere can only be viewed as a circle. Dominic Stratham's article, Isaiah 40:22 the Shape of the Earth, provides many indicators that khûg, the ancient Hebrew word used 2,700 years ago, typically translated into English as "circle", also means sphere. In modern Hebrew both khûg and kaddar mean sphere, as do similar words in other languages, whether possibly coincidental or borrowed or cognate, as with Arabic kura (which word appears in this verse in the most popular Arabic Bible which was translated in 1865). An old German word kugel, the Polish word kula, and the Serbian/Croatian word kugla all mean sphere apparently from the Proto-Indo-European root gug? Also, the pre-modern era renderings of this word khûg as an orb include Bible translations in the 1500s, as sphaera.

* RSR Friends Richter, Carter, & Sarfati: For those tricked into believing in a flat earth, over at creation.com our friends have published a two-minute rescue video. Flat-earthers don't trust NASA (or their scientists like our friend Henry Richter). Yet, of course, dozens of nations are now involved in space exploration along with a growing number of private firms. If they wanted to, the flat-earthers could crowdfund a ticket to space for their leading author who could then see with his own eyes as he orbits the Earth. In CMI's fun video, Dr. Jonathan Sarfati points out that at night, folks in Germany, in the same timezone as those in South Africa, see the North Star while those in the southern hemisphere can't see the North Star but instead see the southern cross and the same constellations as seen from those in New Zealand in a different timezone. Further, Sarfati reminds us that Jesus, being the Creator, of course knew of the different time zones required by a spherical earth, and so in Matthew 24 the Lord speaks of His Second Coming that everyone on Earth will see, even those who were working in the fields and those who were asleep in bed:

* To the Claim that NASA Can't Be Trusted: The flat-earth community can find out directly, for themselves, that the Earth is a sphere rotating on its axis. How? Well, assuming that at least some flat-earthers are not destitute, they can pool their resources and buy a ticket to send one of their own, as a civilian tourist, into space. Then, having the word of someone perhaps they can trust, they can learn the truth (and stop embarrassing themselves). So:
- Flat-earthers, chip in some money, buy a ticket, and send one of your "experts" to the space station.
- Don't trust USA/NASA? Well, ten other nations, even North Korea, and the European Union, ALL go to space!
- Don't trust governments? Well, twenty private companies fly into space, like Virgin Galactic, Blue Origin, & SpaceX.
- Don't trust the view from the space station? Well, soon enough, you can buy a ticket to the moon.

And remember that in the most ancient book in the Bible, at Job 26:7, written almost 4,000 years ago in the time of Abraham's great-grandchildren, we read an amazing statement consistent with astronomy's latest models of the solar system, that God "hangs the earth on nothing."

* There's Hope Even for Daniel Shenton: Even though this evolutionist runs the Flat Earth Society, there's hope for him. Consider this, from Bob Enyart's published paper, Dobzhansky: 40 Years Later Nothing Makes Sense:

[In his famed paper, Theodosius Dobzhansky's] first prediction regarded Saudi Arabia’s late Sheik Abd el Aziz bin Baz, who had recently insisted that the sun orbited the earth. Dobzhansky declared that it would be useless to present evidence to those who “fear enlightenment,” asserting that the Sheik was “so hopelessly biased that no amount of evidence would impress him” (Dobzhansky, 1973, p. 125). However, in 1985 the U.S. invited Prince Sultan bin Salman to fly aboard the space shuttle Discovery. Later, hearing a firsthand account of the evidence from a source that he trusted, bin Baz changed his mind, falsifying Dobzhansky’s prediction (Bin Baz, 2005).

* Fake Interview of Director Stanley Kubrick's Faked Moon Landing: Those vulnerable to the falsehoods of flat-earth proponents make themselves vulnerable to all kinds of hoaxes. For example, various versions of the fake interview of filmmaker Stanley Kubrick confessing to faking the moon landing have deceived many. Eventually, however, an uncut version, embedded here, was published. If you're interested, you'll especially want to see the section beginning at 12:19 into the video. Enjoy! :) 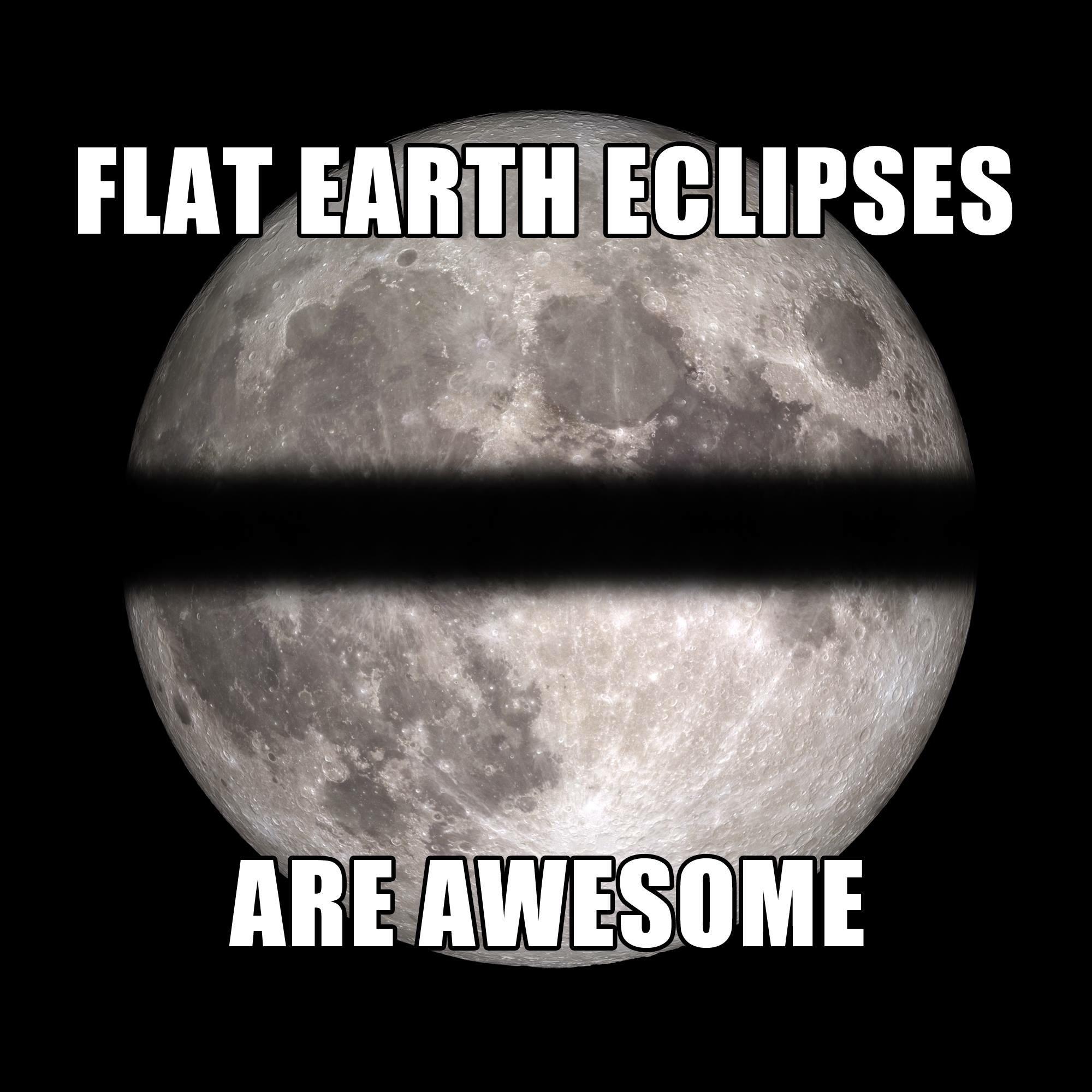