David Coppedge took these photographs in 1983 in Yellowstone National Park and confirmed to RSR after his 2015 trip that today there are no such signs at Specimen Ridge. Instead, wildlife, etc., exhibits are currently on display there. And near Roosevelt Junction at the fenced-in petrified tree site the park service presents a sign attributing these tree remains to catastrophic mudflow, which explanation is much closer to reality than their old "successive forests" story. The old, incorrect "Fossil Forest" exhibit claimed that dozens of layers of petrified trees were still standing "where they grew". As explained on Real Science Radio's List of Not So Old Things program, these trees have no root system and were hydraulically transported to their current location. See rsr.org/list#yellowstone. [The second photo below is an RSR composite.] 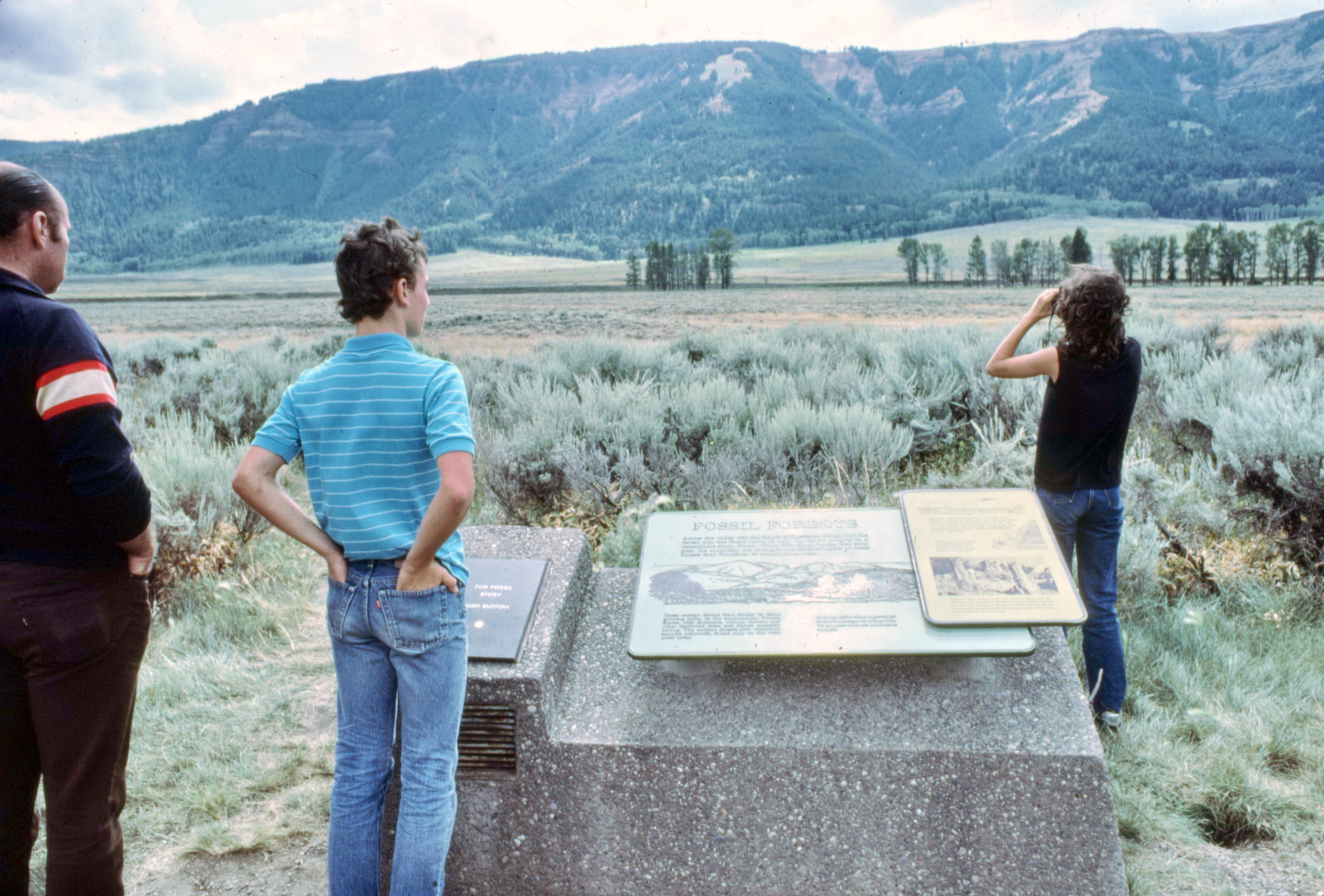 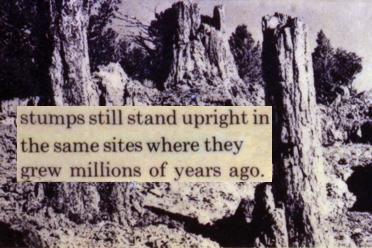 After Bob Enyart's Trading Genesis theistic evolution presentation (see it below) in May 2015 in Malibu, California on the Pepperdine University campus, David Coppedge wrote to Bob Enyart at Real Science Radio:

"The book Roadside Geology of the Yellowstone Country by [geology professor] William J. Fritz (1985, 6th printing 1994), on pp 25-26, also talks about the change. He says, 'When I visited the Mount St. Helens area shortly after the eruption, it was just like Yellowstone!.... Both the mudflows and the appearance of the trees is identical.' (p. 25). On page 26, though, he points out differences between the two sites. Nice to meet you in person today [Bob]." 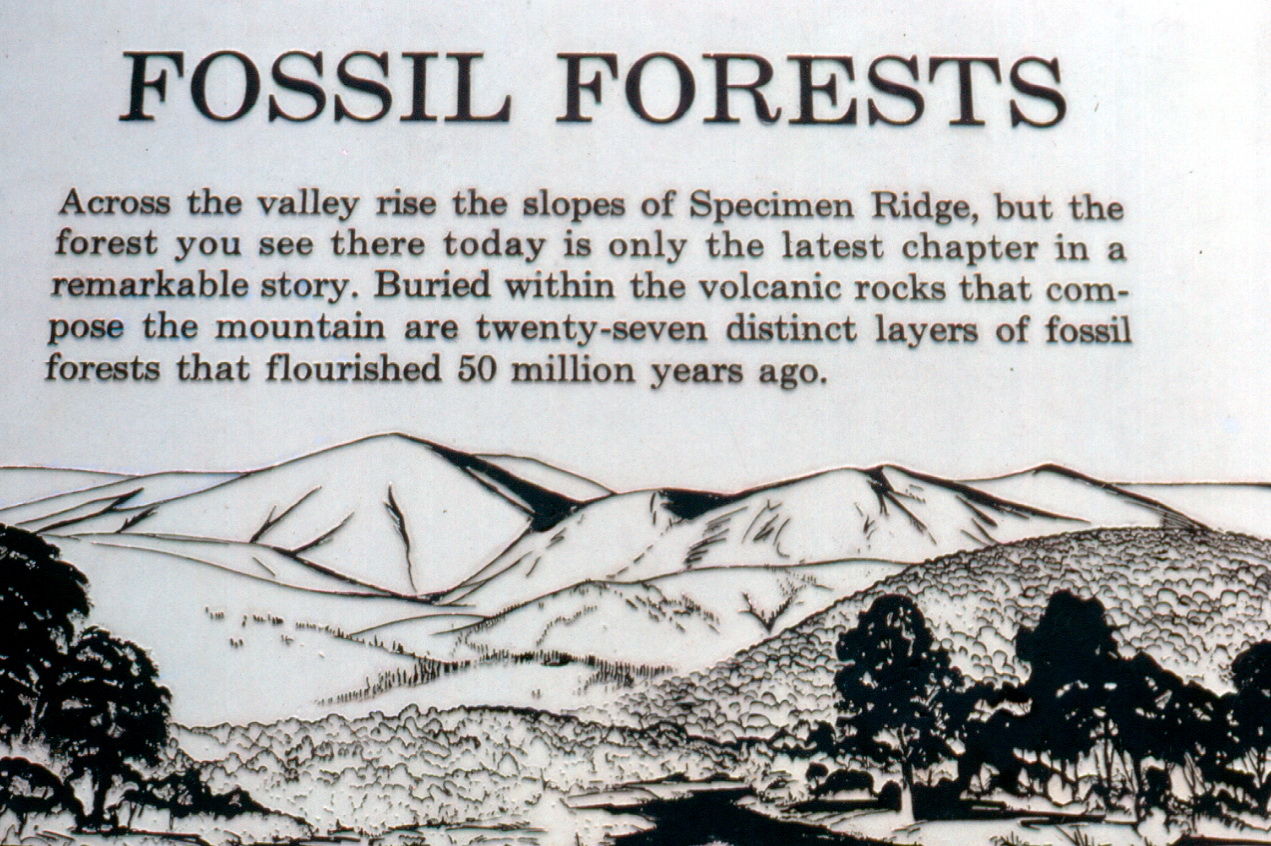 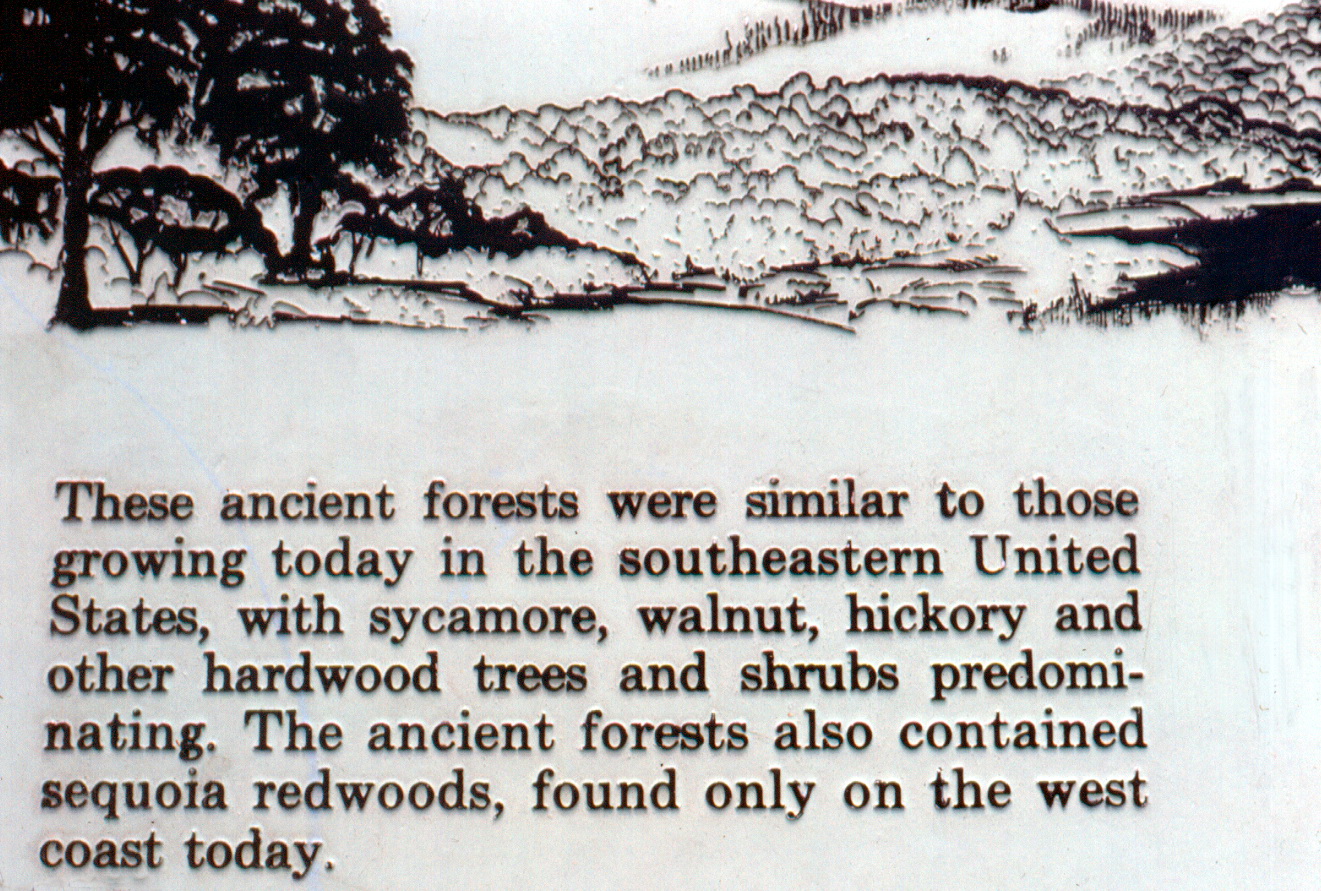 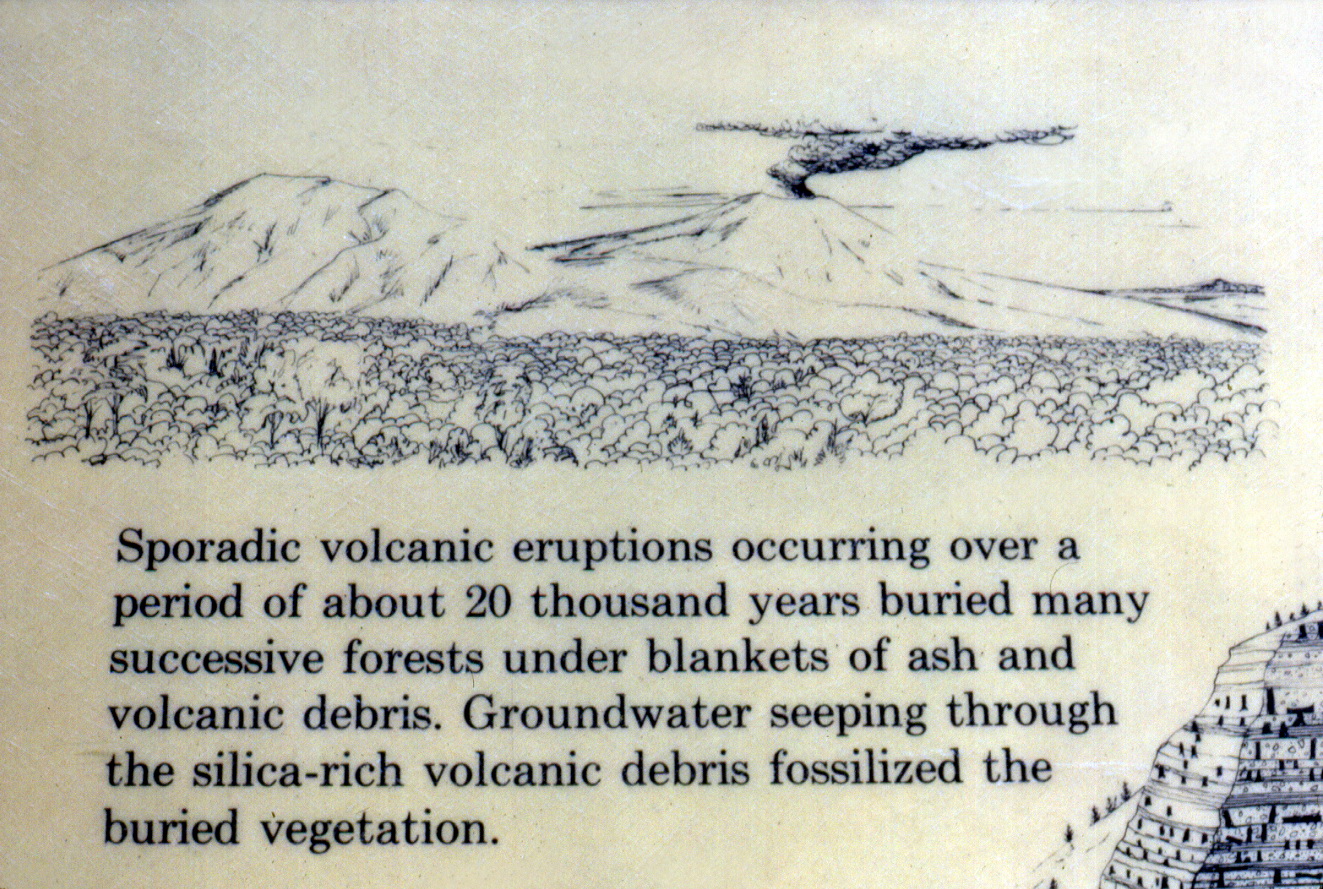 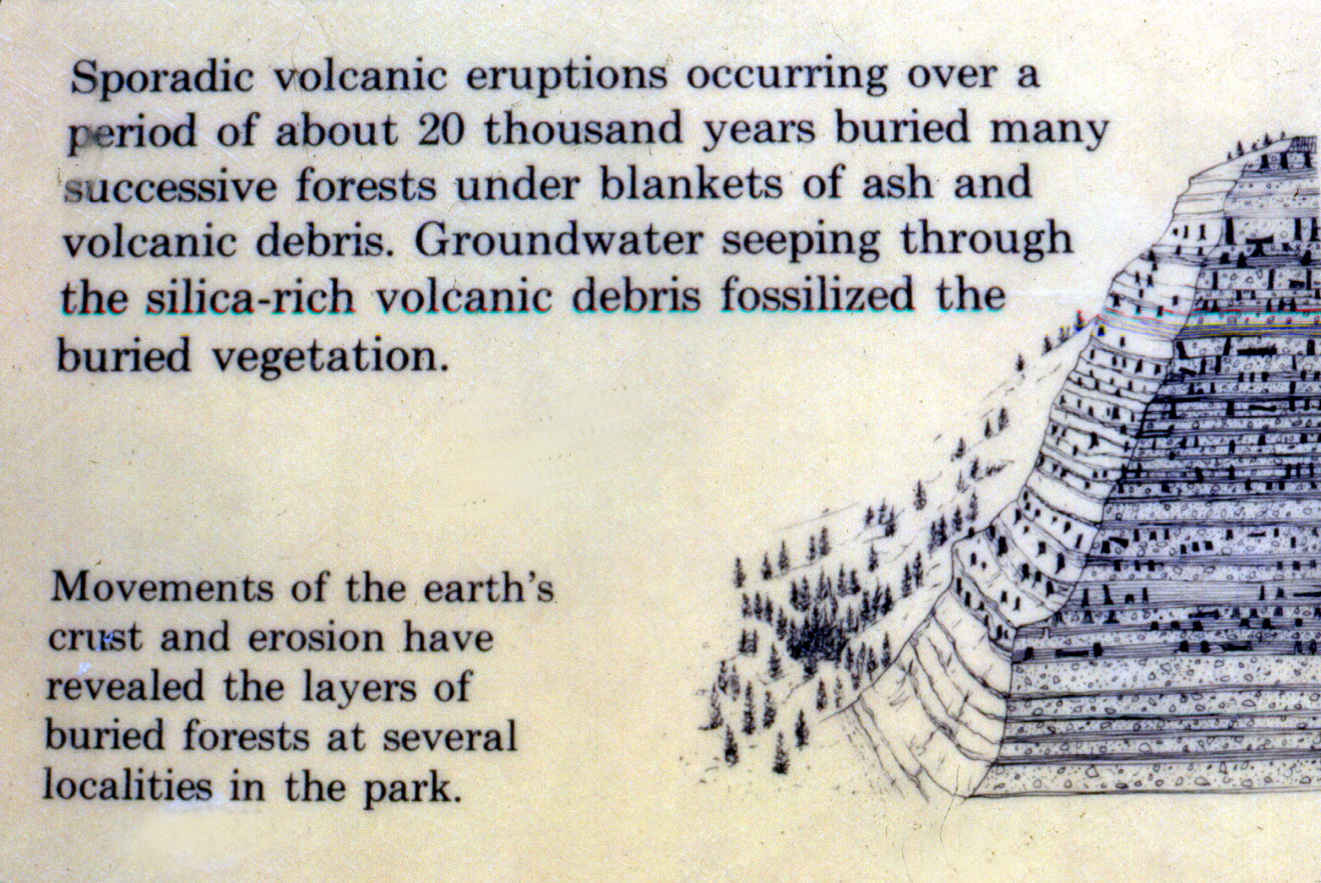 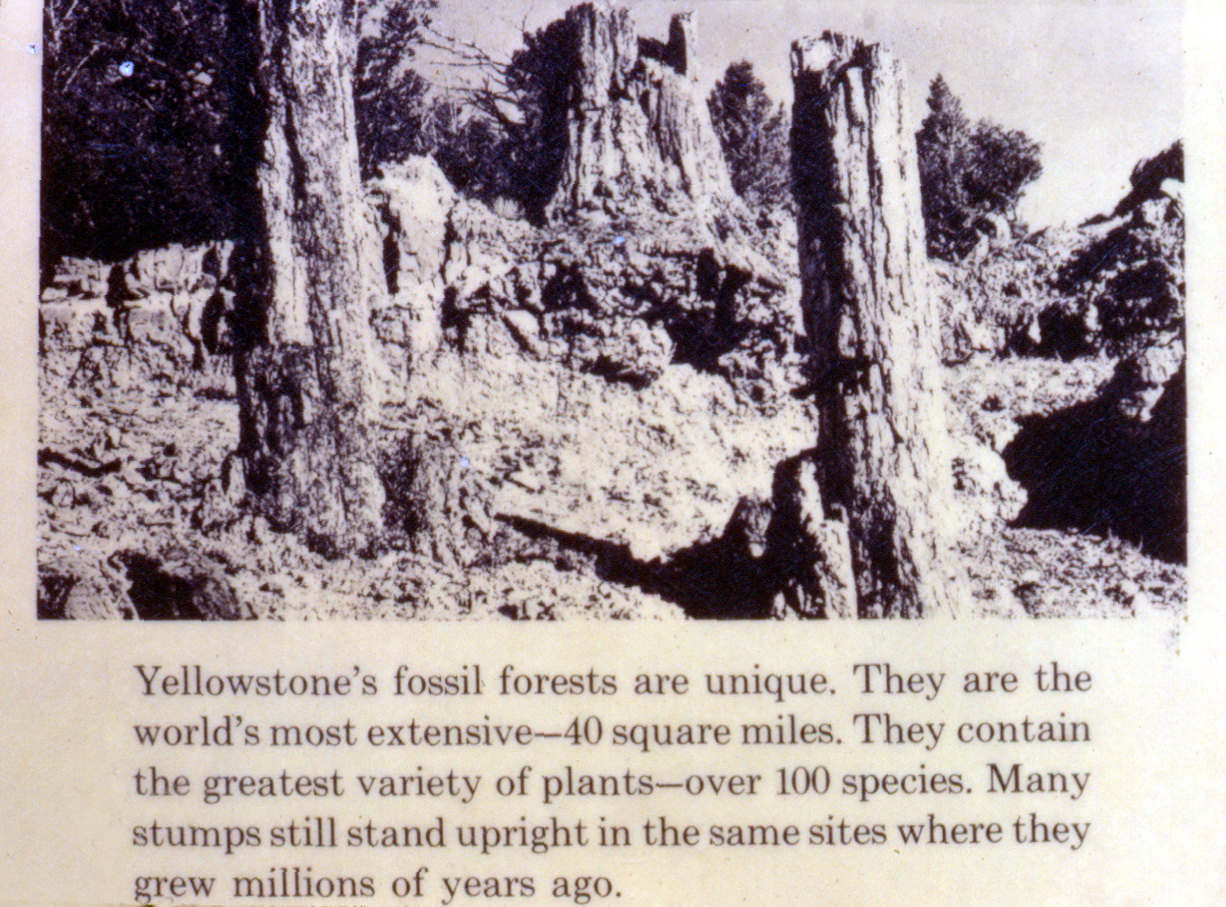 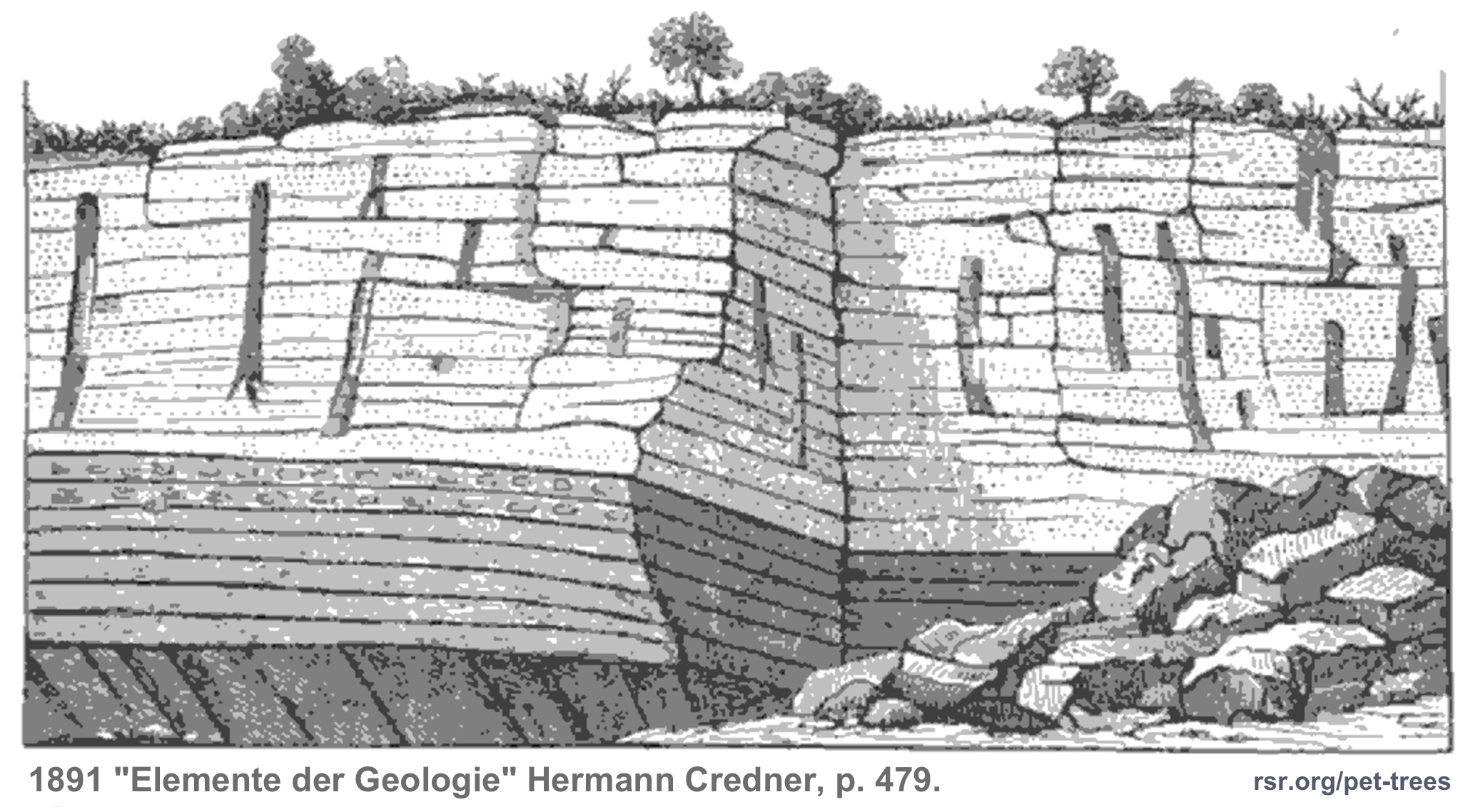 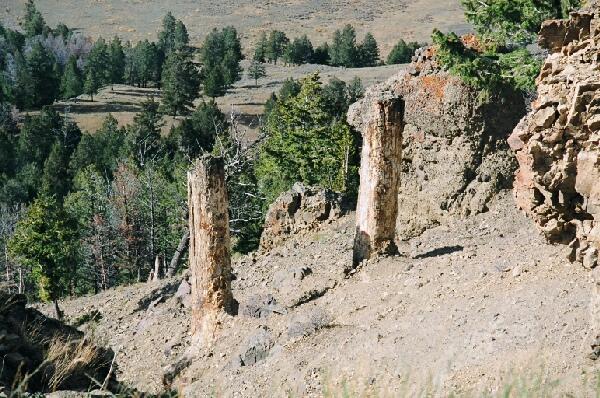 * These Trees Did Not Grow Here: The old-earth biased National Park Service cannot be trusted when it contradicts biblical chronology. For example, creationists worked to correct the NPS' false claim that Yellowstone's petrified trees grew in up to 50 successive forests, each leaving behind one or more individual trees which became petrified, all of this at Specimen Ridge (and Creek).

* Collectively, they form a Polystrate Fossil Forest: Creationists have worked hard to correct the historical record. Yellowstone's petrified trees lack root systems. So, they do not stand where they grew. Instead, they were all deposited during a catastrophic event that was rapidly laying down a wet sediments (which lithified into today's strata). These trees, after getting waterlogged and sinking vertically (upright floaters), settled onto what was, at their moment of settling, the topmost layer. They were then soon buried (in days to months; not millennia) by subsequently deposited sediments, and joined by other trees vertically sinking and settling into the successive layers of sediments that were burying the trees that had sunk just days and weeks previously. Thus, the entire system of the fossil forest forms a single polystrate fossil that compresses the formation event from allegedly tens of thousands of years down to mere months. See this also in RSR's 3-minute YouTube video:

* Bob Enyart's Argument Against Theistic Evolution: as filmed on the Pepperdine University campus at Malibu...

* Example of Polystrate Radiating Spines: These fossils too, like all polystrates, collapse the possible deposition times of various strata, from alleged hundreds or thousands of years or more down to typically minutes and hours. Have you ever wondered how far polystrate-time-compressed strata extend? (If you haven't, you're either new to geology or your lack of curiosity exposes your hesitancy to allow hard scientific data to challenge your belief system.) One way to find out how far such rapidly-deposited strata extend is to implement RSR's Geo Earth Explorer tool using the APIs in Google Maps as described at rsr.org/gee and on National Geographic's website and in the CRS Quarterly. 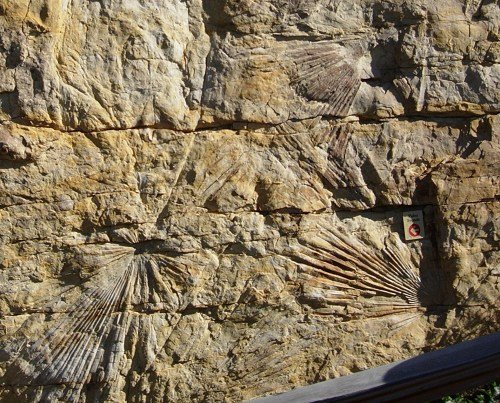 * Example of Limestone Encased Trilobites: This specimen, meticulously restored by FOSSILERA, like countless trilobites around the world, was buried in limestone, much of which is said to be deposited very slowly. 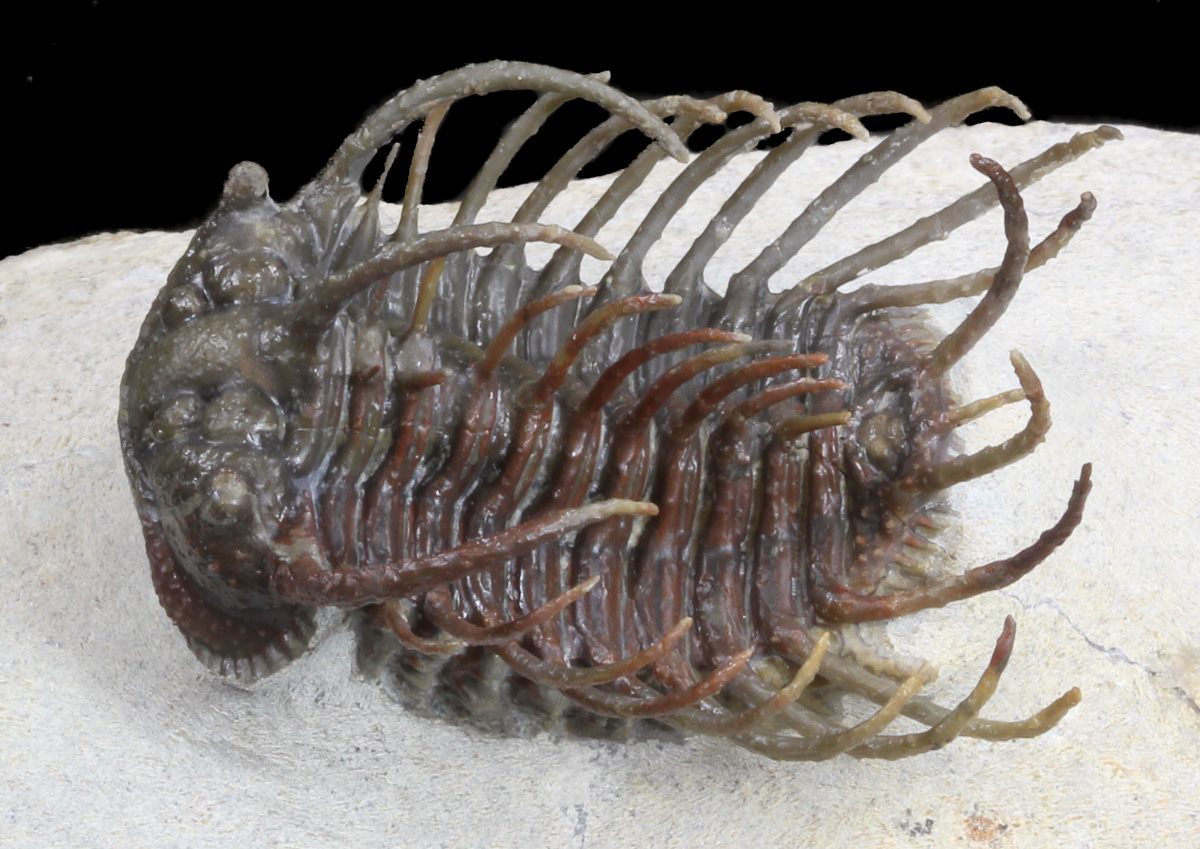 Yet thousands of trilobites from countless locations are buried three-dimensionally. After having viewed perhaps thousands of trilobites from museum collections, private collections, fossil stores, and over the Internet, it appears that there is no evidence of greater erosion of their upper parts as compared to their lower parts. These creatures, regardless of how many layers of fine particles cover their bodies, were buried in a single depositional event, and not gradually. (See RememberTheNautiloids.com for another enormously widespread example of this observation.)

* Example Polystrate Fossil (this one of a Mesosaur): Here's an example of a polystrate fossil from the collection of the Creation Guy John Mackay. Fossils like this one, buried in multiple "varve" layers, which are claimed to be annual depositions, show no erosional patterns that would indicate a gradual burial. The image to the right, and also from John Mackay (used by permission) is of a bone of an extinct vertebrate squid-like creature, a Belemnite. It's a polystrate fossil because like the countless trilobites, nautiloids, and other creatures, it was buried in limestone, much of which was allegedly super slowly deposited. 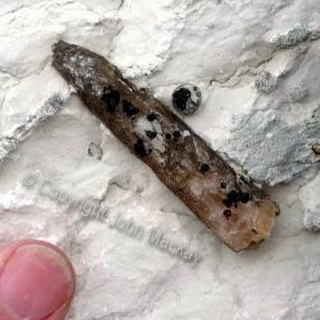 * Leaves Buried Vertically in Diatomaceous Rock: Allegedly, diatomaceous earth is evidence of the passage of enormous lengths of time because of its formation from single-cellular diatoms. However, this photo of delicate polystrate leaves (not unlike an indelicate whale similarly buried), demonstrates that diatomaceous sediments can be deposited rapidly. 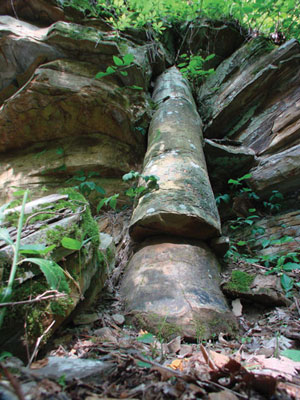 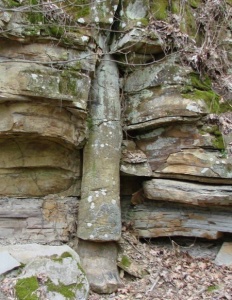 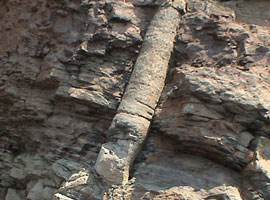 * Video of Similar Polystrate Trees in Tennessee: By RSR friend David Rives. (Click image to enlarge, and check this out too.) 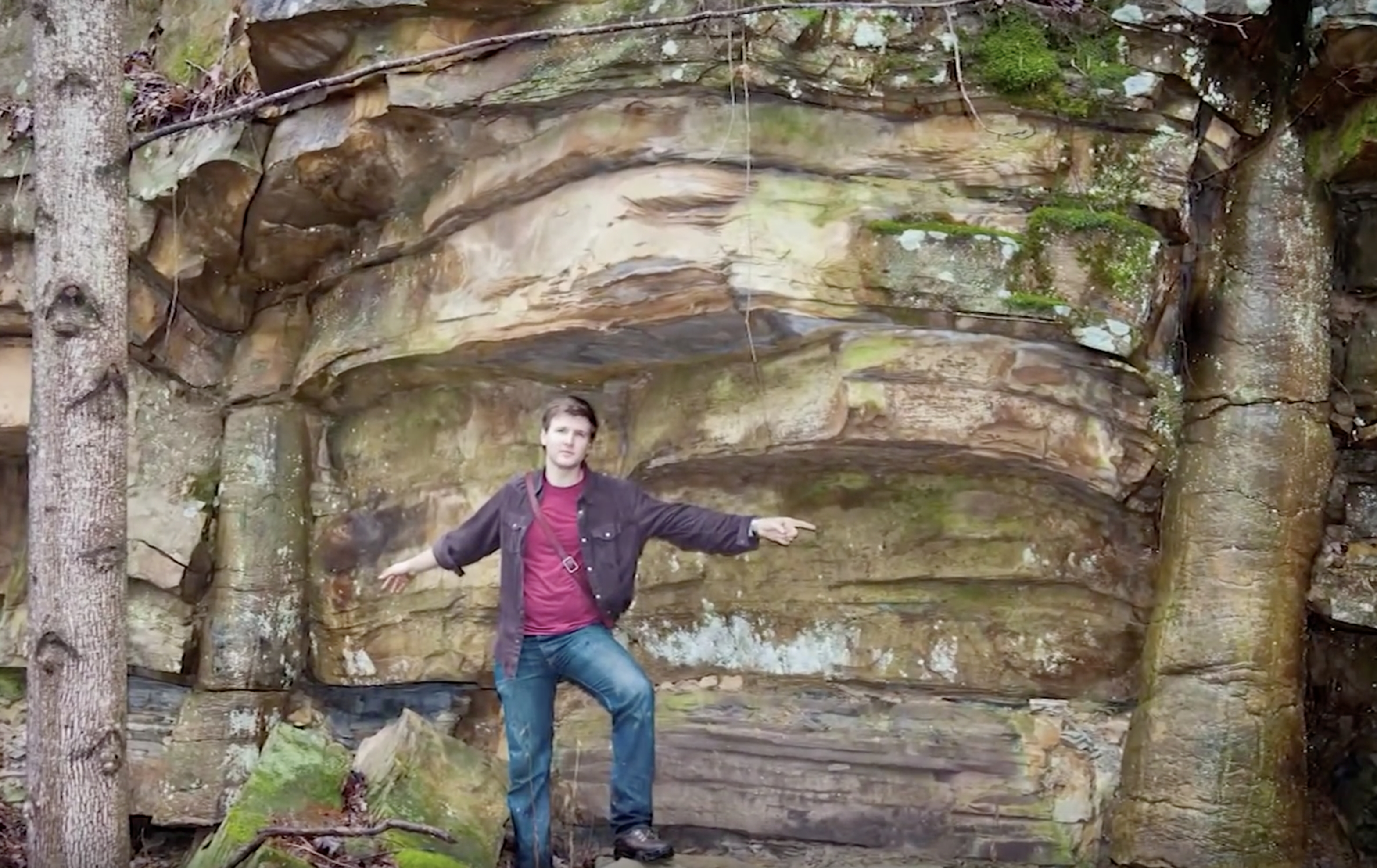