The Biblical Role of Government in Marriage

Who has the authority to grant permission for people to marry? Some claim that only the church has authority to preside over weddings. Yet for generations here in America, while this is changing, most people have willingly submitted to the government as the official certifier of marriage. For as barista Leanna Aberle has said, "Marriage is a covenant not only between the man, the woman, and God, but also with the whole world." Others however claim that the authority to marry lies solely with the two individuals involved. (Our article The Bible and Polygamy presents the prohibition of polygamy in New Testament times.) Consider arguments for and against each of these three ideas on authority regarding marriage.

The Government Should Certify Marriage

Arguments Against:
- Because God instituted marriage, certification of marriage is therefore a church function
- Government is typically corrupt and cannot be trusted and will ruin or even forbid marriage
- By submitting to government licensing, people are handing their family over to the state

Arguments For:
- God instituted family (including marriage), church, and government
- Marriage is a covenant not only between the couple and God, but also with the whole world
- The whole world must treat a married couple differently than they treat two unmarried people
- A marriage is either lawful or unlawful

- Enforcement of legality is the government's domain
- To administer marriage requires the potential use of force, including to prevent incestuous marriage
- The administration of divorce, division of property, and child custody also potentially requires force
- Only government can use administrative force (compel appearance, enforce rulings, etc.)
- Only government can compel testimony regarding marital status, child custody, etc.
- God requires marriage for sexual relations even in nations with no church presence
- Claiming only the church can properly maintain marriage ignores widespread Christian immorality
- Government began as the patriarchal administration of tribes as mankind dispersed globally
- Throughout human history all cultures have recognized marriage, including pagan societies
- The Book of Exodus implies that God saw the marriage of the pagan Potiphar as inviolable
- Jesus said the Samaritans did not know God but He recognized their divorce and remarriage
- A divorced Samaritan woman's cohabitation did not make the man her husband, Jesus agreed
- 3,500 years of Judeo-Christian history since Moses recognized adultery as not only a sin but as a crime
- Judeo-Christian legal history still recognizes prostitution as not only a sin but as a crime
- Government prohibition of prostitution is related to its certification of marriage
- Government should nullify unlawful marriages such as with children or between homosexuals

- There is no right to anonymity and there is no right to claims of secret marriage or family
- A bad government, as Jesus showed, like a bad dad, still has a responsibility to do rightly
- People should disobey evil government commands, but otherwise generally submit to the authorities
- A strictly private or church wedding protects no one against governmental divorce decrees
- Without government's authority, God's institution is destroyed by a virtual marital anarchy
- Christians who argue otherwise unintentionally undermine God's institution by promoting marital anarchy

Only the Church Should Certify Marriage

Arguments For:
- Because God instituted marriage therefore certification of marriage is a church function
- Not the government but only the church can retain the holiness aspect of holy matrimony

Arguments Against:
- God wants even the millions of people in non-Christian cultures to marry rather than cohabitate
- Marriage is a covenant not only between the couple, God and the church, but also with the whole world
- Not just Christians but the whole world must treat married people differently than unmarried people
- Claiming only the church can properly maintain marriage ignores widespread Christian immorality
And see above for the arguments for the government's role in certifying marriage.

Marriage Should be a Strictly Private Affair

Arguments For:
- Marriage is between two people and God
- The Bible doesn't explicitly give government any say over who marries

Biblical Context: As America's government becomes increasingly godless some conservative Christians are claiming that a man and woman who marry should ignore the government's traditional role in certifying marriage. They argue that because God instituted marriage, the government has no valid role in issuing marriage licenses and that instead, the administration of the institution of marriage lies exclusively within the domain of the church or of the betrothed individuals.

God's commands in Genesis initially applied equally to all the human race. Later, God created a people unto Himself called Israel when He gave to Abraham and his descendants the special covenant of circumcision. He then began to give some special instructions exclusively to the Israelites. For example, God did not require the circumcision of Egyptian male children (as He does not require circumcision at all today, for anyone Galatians 5:2-4), but He required circumcision only of the sons of the Israelites and of those who became proselyte Jews including by becoming attached to a Jewish family.

Many Bible teachers identify Genesis 9 as God's first authorization of human government, when, prior to God's covenant with Israel, He commanded the patriarch Noah to execute convicted murders. God does not exclude the unbelieving nations of the world from His prohibition of murder, for murder was identified as a crime beginning when Cain killed Abel (Genesis 4:8). Thus Do not murder does not apply to only to God's covenant peoples but to all the people of the world. (Romans 3:19).

Marriage is therefore not only for God's special covenant peoples (that is, for Old Testament Israel and the New Testament Body of Christ). Why not? Because as Jesus answered, “from the beginning of the creation [note: not after billions of years], God made them male and female. For this reason a man shall leave his father and mother and be joined to his wife, and the two shall become one flesh," (Mark 10:5-8).

Thus marriage is for all the people of the world, not only for Israel, nor only for the Body of Christ, but for believers and pagans alike. So as expected, anthropologists have found that marriage has always existed, around the globe in every known age and in every known culture. Biblically for example, Moses was right not to violate Potiphar's marriage, since the wife, even of a pagan, was truly bound to her husband. And Jesus was right (of course, being God the Son), that the Samaritans did not know God, yet He recognized that the unbelieving woman at the well had been married five times and the man she was currently living with was not her husband. And He also acknowledged her serial divorces as evidently recognized by some particular authority. And because the Samaritans "did not know God", the authority that the Lord recognized was obviously not a religious authority. And it was not the authority of the couple themselves, for regardless of their cohabitation and living as though they were man and wife, Jesus recognized that they were not. Rather, the remaining option is the truth, that Jesus recognized the highest level of authority in their culture, their governmental authority, as having the ability to certify their marriage. And why would that be? It is because marriage is a covenant not only between the man, the woman, and God, but also with the whole world. Thus, the culture at large, the general public, and the government itself, as well as every individual, in the approrpriate context should treat a married couple not as two individuals but, indeed, as a married couple. That is why marriage cannot be just a private affair, or just a church affair.

Yet because God gives different commands to different peoples, unless care is taken, it is easy to confuse fundamental principles. So the Apostle Paul writes that we Christians will not "be ashamed" if we are "diligent" in "rightly dividing the word of truth." (2 Tim. 2:15).  In this respect Jesus commanded the Apostle Paul to give to the Gentile believers some teachings that He Himself had never given to Israel. For example, Paul demonstrated that Gentiles could circumcise for cultural reasons (Acts 16:3), yet they were never to circumcise as though in obedience to Israel's covenant of circumcision (Gal. 5:2-4). A similar confusion could arise over divorcing a wife who is outside of God's covenant. For God had prohibited the Jews from marrying Gentiles (Deut. 7:3-4) for various reasons, including to protect the Messianic lineage. When Israelites disobeyed this command, they were to divorce those wives, but "let it be done according to the law" (Ezra 10:3). Throughout His earthly ministry, Jesus never instructed the Jews to refrain from divorcing a Gentile wife. Yet Christians in the Body of Christ might misinterpret that command as requiring them to divorce an unbelieving wife, because she also would be outside of God's covenant people. However, the Body of Christ is not national, but international, and therefore, while a Christian intentionally marrying an unbeliever is a sin, there is no parallel command to divorce on those grounds. So the Apostle Paul clarified: "But to the rest I, not the Lord, say: If any brother has a wife who does not believe, and she is willing to live with him, let him not divorce her" (1 Cor. 7:12). All Scriptures is profitable for doctrine, and Paul is not saying that this passage lacks divine inspiration. Rather, he explains that while Jesus did not repeal for Israel the biblical practice of divorcing non-covenantal wives, members of the Body of Christ are not justified in divorcing a spouse outside of God's covenant.

So the Christian needs to carefully understand the context, that is, who is saying what to whom, in order to understand the underlying biblical principles so that he can correctly apply them today. As a final example, early governmental authority resided within the patriarch of a tribe, and as communities grew into city-states and eventually nations and empires, while the form of government changed, for better or worse, God's principles of governance did not change. Thus as with Isaac marrying Rebekah, Jacob with Leah, and Boaz with Ruth, the few biblical records of early marriages occurring under the authority of the patriarch is not an argument against government certifying marriage, since God's governmental authority resided within such patriarchs at that early time in human history.

Of course, as Peter said, "We must obey God rather than man." So as throughout the Scriptures, and memorialized in the Hall of Faith in Hebrews 13, people should disobey the governing authority whenever it issues unjust commands. Just as fathers often do wrongly in raising children, governments often protect the guilty and order the death of the innocent. Such wickedness however does not repeal, however, God's general authority structure of government and family. Thus in extreme times, as advocated by Plato in The Republic, or as implemented in communist China, when the government prohibits marriage between a man and a woman whose union God would approve of, it would be right to disobey the governing authorities. However, the Christian should never use such concerns to deny the authority (and responsibility) that God gives to government. And though such conservative Christians desire to affirm both God's supremacy and the blessedness of family, they unintentionally undermine both by advocating what is effectively a marital anarchy that undermines God's institution of marriage. 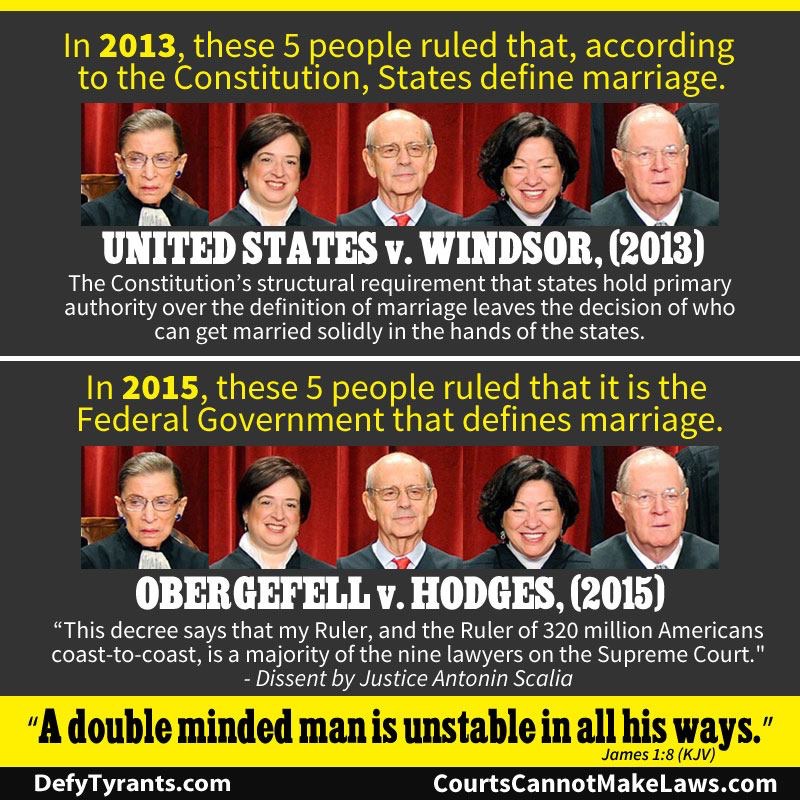 These justices merely shifted the authority to wherever rebellion and perversion had the greatest momentum. And actually, both rulings were equally wicked. Not the Supreme Court's absurd 2015 opinion, but only God defines marriage. As we say here at BEL:

Not the states. Not the Feds. Only God decides who weds.

See also kgov.com/acceptance-of-immorality for a list of what Christians are increasingly defending.