Miracles and Unbelief (i.e., they tend to PRODUCE unbelief)

Benny Hinn on TV once cursed Denver Bible Church
after we rebuked him with our large
"Miracles for Sale" signs at his "crusade".

"We're thankful for Hinn's words of repentance and we pray he follows through."
-Pastor Bob Enyart, author of Miracles Produce Unbelief at kgov.com/miracles

A miracle is an event that supersedes natural or spiritual law. Turning water into wine supersedes natural law and so is miraculous. Praying does not supersede any spiritual law so it is not miraculous to say a prayer, whereas a person exercising authority over a fallen angelic being, for example in an exorcism, would supesede spiritual law. Sections of the Bible differ in how commonly they record miracles. But there is one thread that runs consistently throughout: 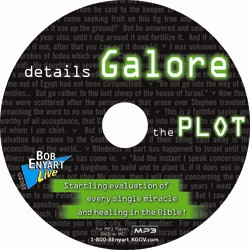 Yet with all this, virtually the entire nation rejected God:

For who, having heard, rebelled? Indeed, was it not all who came out of Egypt, led by Moses? ... Was it not with those who sinned, whose corpses fell in the wilderness? Heb. 3:16-17

The Lord explained it this way:

"If they do not hear Moses and the prophets, neither will they be persuaded though one rise from the dead." Luke 16:31

Why not? With one's eyes one may see a dead body resurrected, but faith does not come by sight. Rather, "faith comes by hearing, and hearing by the word of God" (Romans 10:17). So even Jesus' own city rejected its miracle-working Messiah (Mark 6:4-6).

Why would miracles lead to unbelief? Con­sider this. Ten-year-old Norman bickers with his 12-year-old brother Jack. "We'll probably have left over spaghetti for lunch." Jack says, "No we won't. There's none left, it's all gone. We finished it last night."

Norman comes out of the house with a serving bowl half filled with leftover spaghetti. He shows it to his brother.

Question: Is Jack happy that he now knows the truth? Answer: No. Actually, Jack is angry. Why? Norman proved him wrong!

People do not like the truth shoved into their faces. Jack may now know that there is leftover spaghetti but he resents his brother for proving the point. These boys quarreled over a minor issue. What is the reaction when the issue becomes more significant?

Often the more serious the issue, the more a man resents those who prove him wrong. Evangelism sees the ultimate application of this principle. He who rejects God is not typically eager for correction. When someone's heart is hardened against God, a miracle shoves the truth in his face. His mind cannot deny God but his heart can resist. Thus countless witnesses of the miraculous have refused to acquiesce.

In which three cities did Jesus perform most of His miracles and what was the corporate response of those cities to His works?

Then He began to rebuke the cities in which most of His mighty works had been done, because they did not repent... Chorazin... Bethsaida... Capernaum... Mat. 11:20-23

Jesus' miracles benefited the masses, yet entire cities rejected Him. His very reputation for doing miracles hurt His own ministry:

So He came to Nazareth, where He had been brought up. ... And they said... "Whatever we have heard done in Capernaum, do also here in Your country." ... So all those in the synagogue, when they heard these things, were filled with wrath, and rose up and thrust Him out of the city; and they led Him... that they might throw Him down over the cliff. Luke 4:16-29

In the city where Jesus did His first miracle the people's constant requests discouraged Him. For that reason He chided Cana for their constant need to "see signs and wonders" (John 4:48). In another region, Christ's extraordinary reputation and His visible authority over demons (Mat. 8:28-33) did little to produce repentance:

The Lord did many miracles in Jerusalem and it's suburbs. Yet even in Jerusalem the crowds were not won over.

For good reasons God determined to provide signs and wonders for and through Israel. Yet even He tired of their demand for service. It's like bratty kids who want more and more, and no matter how much a parent does for them, they just demand more. It gets so that the parent is restrained from doing the good he would have wanted to do, because of the emotional weakness and immaturity of his children. The parent, for the child's own good, wants the child to love him, not for gifts but for himself.

Then the Pharisees came out and began to dispute with Him, seeking from Him a sign from heaven, testing Him. But He sighed deeply in His spirit, and said, "Why does this genera­tion seek a sign?" Mark 8:11-12

Miracles did not effectively teach the crowds for their outward manifestation of faith did not persuade Jesus:

Most assuredly, I say to you, you seek Me, not because you [believe], but because you ate of the loaves and were filled. John 6:26

The rich kid expects special treatment. The rules should not apply to him. But his wise earthly father, though he has wealth and power, does not comply. How much more will God, our heavenly Father, encourage His children to live by the rules, without special exceptions?

What happens if the rich kid has an imprudent father? His son wants special treatment and gets it. The rules are bent for him, over and over and over. He does not learn the lesson of his failures here on earth. He is shielded from the consequences of his actions. Obviously this hurts the son, but what of the onlookers? What do neighbors think of the powerful dad who pulls strings so his kid gets away with things other kids cannot get away with? What do schoolmates think of the rich kid's privilege? Does it warm their hearts? Are they drawn to respect dad and admire the son?

Breaking the rules for favored sons makes for difficult relationships. Thus, when God performs miracles for some, He complicates the conversion of others. He knows that. He filled a book with the evidence. He suffers anguish over the selfishness of His children. They ask and ask, mindless of the repercus­sions. How many perverse generations have demanded special favors of Him? Jesus said:

An evil and adulterous generation seeks after a sign... Mat. 12:39

Conspicuous by their Absence

Why do the Epistles have a scarcity of miracles? The Plot presents charts that list all 343 miracle events recorded in the Bible. (The healing of the ten lepers, for example, is counted as a single miracle event.) God miraculously healed every sick person introduced in the Gospels and Acts, but none in the Epistles. For example, Paul's said, "Trophimus I have left in Miletus sick." (2 Tim. 4:20).

Paul's first letter to his good friend shows that Timothy had a reputation as a physically unhealthy person who suffered from "frequent infirmities."

...use a little wine for your stomach's sake and for your frequent infirmities. 1 Tim. 5:23

The Epistles tell of no specific miracles. Paul knew of Timothy's continuing health problems. This means that Paul himself did not heal Timothy of this persistent problem. Further, of course, neither could Timothy nor any of the believers around him heal this ailment. Moreover, Paul does not even instruct Timothy to seek deliverance by praying for healing or anointing with oil.

Regarding demon possession and exorcism, many Christians have a sense, not backed up by Scripture, that the amount of demonic activity that we read about in the first five books of the New Testament might be the norm. However, the possession and exorcism in the four Gospels and Acts was the exception, not the rule. The Old Testament does describe some very significant demonic activity. However, throughout all the thousands of years prior to the New Testament the Scriptures present not a single case of demon possession.

Separately, notice that Christians who pray for God to miraculously fix their cars only pray for repairs they cannot see with their eyes. If a car does not start, some believers will ask God to fix it rather than asking Him for wisdom in the situation. However, believers never ever pray for a repair of something visibly wrong with the car. For example, Christians never pray and ask God to supernaturally fix a flat tire. Why? If a knob is broken off or a windshield is busted out, Christians do not ask God to fix those things. Why? Because they know, deep within, even if they have a hard time admitting it, that God will not fix those things no matter how much faith they have. However, a mechanical problem that they cannot see presents a blind faith opportunity to deceive themselves. The uncertainty that goes with hidden problems leaves enough chance that the car just might start on the next attempt (as cars so often do). So, Christians claim a miracle when the car starts on the next try.

Supernatural intervention will resume in the (actual) End Times. Meanwhile, anyone can create their own list of questions that easily disprove the claim that miracles continue today, including:
- Why don't amputees get healed?
- Why don't televangelists clear out children's hospitals?
- Why doesn't healing ever remove a child from an organ donor waiting list?

Christians should admit that they do not possess the physical redemption of their earthly bodies. For if they did possess that redemption, then they would not long for it. So remember to glorify God in trials and difficulties because that is when His power will shine brightest.

...the sufferings of this present time are not worthy to be compared with the glory which shall be revealed in us... For... we ourselves groan within ourselves, eagerly waiting for the adoption, the redemption of our body. 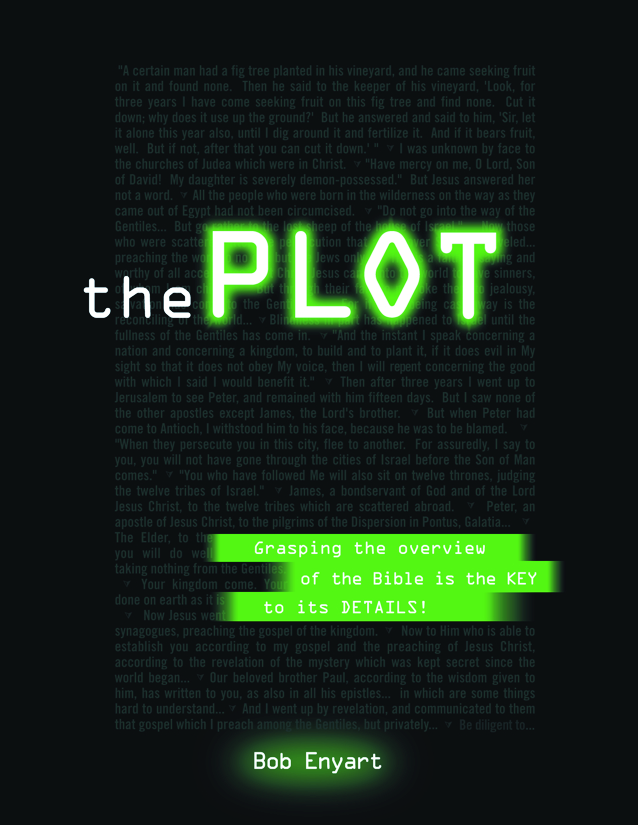 Finally, consider also that in a sense, a miracle robs an unbeliever of the opportunity to exercise faith.

If you enjoyed this article and learned a lot, for more information you may want to read Bob's best-selling book, The Plot or listen to Bob teach through this study. The Plot , which provides an overview of the Bible, is Bob Enyart's life's work. Chapter 10 presents charts that show at a glance the reactions (good/neutral/bad) to each of the 343 miracles in Scripture. You can get The Plot online or by calling 1-800-8Enyart and online you can see more of Bob Enyart's Bible resources or write to us at BEL, PO Box 583, Arvada, CO 80001.